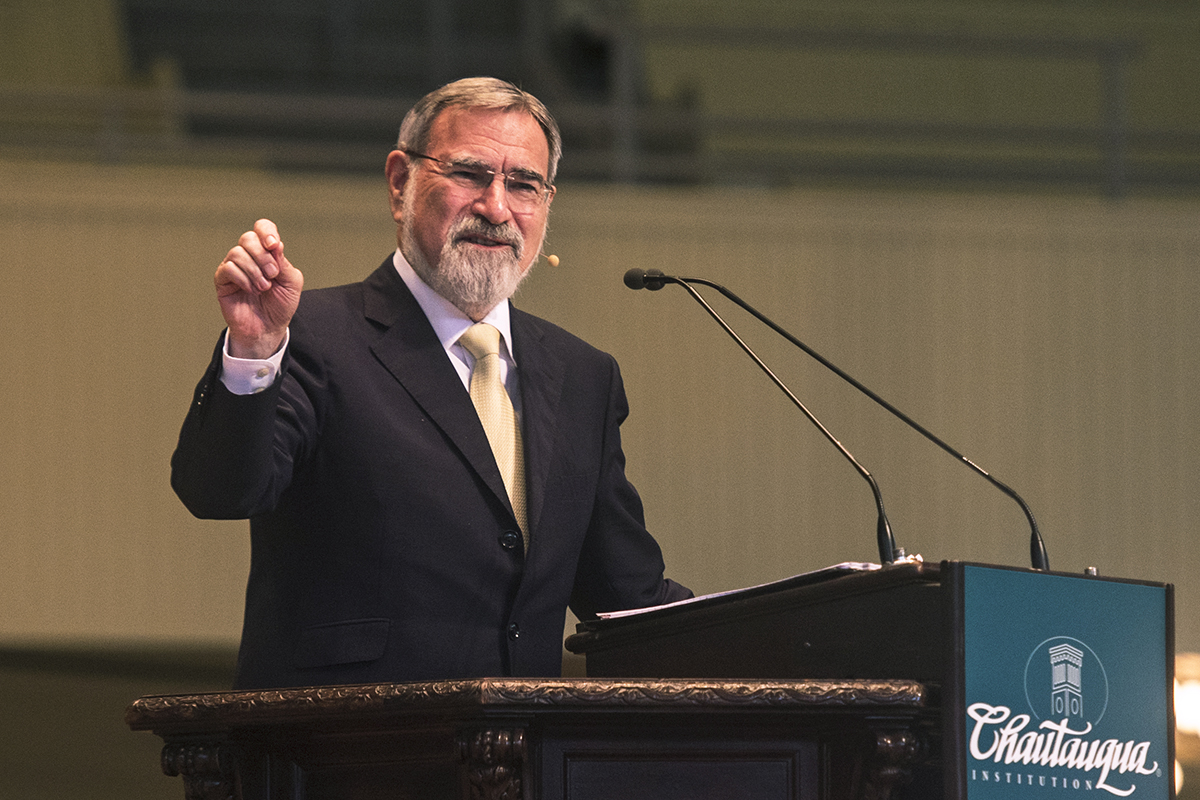 Each of the three quotes Rabbi Lord Jonathan Sacks opened his Thursday morning lecture with came from a decidedly different historical context; yet all shared a sense of impending doom.

The first was an old Chinese curse: “May you live in interesting times.”

The second was a pithy Woody Allen remark: “More than any other time in history, mankind faces a crossroads. One path leads to despair and utter hopelessness. The other, to total extinction. Let us pray we have the wisdom to choose correctly.”

The third was a joke about a Jewish text that reads: “Start worrying. Details to follow.”

Speaking in the Amphitheater as part of Week Three’s theme, “A Crisis of Faith?,” Sacks set the stage with this trio of ominous quotations to explore the modern western world’s perilous relationship with spirituality.

“We are going through one of the most profound revolutions in all of human history … and I sum it up with a single phrase: cultural climate change,” said Sacks, the former chief rabbi of the United Hebrew Congregations of the Commonwealth and a prolific author.

Just as literal climate change breaks down old patterns and radically changes weather conditions, this new cultural climate change is causing “a series of storms in the West” that will upend conventional notions of faith and the role religion plays in society.

Why is this happening?

The first narrative is the “secularization thesis,” or that the world is getting progressively more secular.

Sacks said each of the last several centuries has seen a new mode of secularization take hold. In the 17th, thinkers like Newton and Descartes secularized knowledge. In the 18th, political revolutions and the church/state divide secularized power. The development of new modes of art and entertainment secularized culture in the 19th, and the ethical break from Judeo-Christian doctrine in the second half of the 20th secularized morality.

“However, four centuries of secularization lead us to expect that the process will continue, but it isn’t continuing,” Sacks said. “Because in the 21st century, we’re seeing — at least in the Middle East and Africa and Asia — the world getting more religious, not less.”

The second narrative is that of westernization, whereby an adoption of western norms is deemed necessary for success in the modern global ecosystem.

We are going through one of the most profound revolutions in all of human history … and I sum it up with a single phrase: cultural climate change,” Rabbi Lord Jonathan Sacks said.

But with the rise of China, India, Russia and the Muslim world, this notion, too, seems outdated.

“All four of those cultures believe tomorrow belongs to them, not to the West,” Sacks said.

The third and final narrative is that of accommodation, or that religions need to adjust to the demands of secular society in order to survive.

Yet conservative and orthodox houses of faith are now surpassing liberal ones in prevalence; religion that accommodates secular life is being replaced by religion that resists it.

There are “two extraordinary prophets” who saw these trends before anyone else did. The first, After Virtue: A Study in Moral Theory author Alasdair MacIntyre, argued that the Enlightenment project of reason-based morality had failed and that religion should retreat from secular society (the “Benedict Option”). The second, The Lonely Man of Faith author Rabbi Joseph Soloveitchik, used the first two chapters of Genesis to draw a contrast between a secular urge to dominate nature and a religious urge to stand in awe of it. Soloveitchik, too, advocated for religious withdrawal from the larger world.

This tension reminds Sacks of a slapstick scene from a film he once saw.

“The hero is trying to escape from one car to another,” Sacks said. “He reaches out and puts his hand and his head in another car; his head is in (one) car and his legs are in (the other) car, and (they’re) going on in parallel, when suddenly there’s this traffic island in the middle of these two cars.”

This is the precarious situation in which the modern world finds itself. Religion and society “have diverged, and they can’t be held together any longer.”

“How does this affect us in the contemporary world?” Sacks asked. “And the answer (is) … in three dimensions: first, family … second, community … and third, is what is happening to society.”

In terms of the impact on families, Sacks noted that people typically misunderstand Charles Darwin’s theories of natural selection. Darwin believed that reproductive success was the best test of adaptive fitness; given the correlation between western secularism and declining birth rates, Sacks argued for an evolutionary basis to religiosity.

“Having children and raising them involves enormous sacrifice … (and) religious people understand the concept of sacrifice,” Sacks said. In contrast, “throughout history, people in a secular, consumerist, individualist culture find it much harder to live by sacrifice.”

That is why, Sacks said, from ancient Greece to imperial Rome to Renaissance Italy, a decline in faith precipitates a decline in birth rates.

“Europe will die because it wasn’t mindful; it misread Charles Darwin,” Sacks said. “(They) took him as the patron saint of atheism and failed to realize that actually he was the prophet of … having enough faith to bring a child into the world.”

Communities, too, will be impacted.

Pointing to the joke about two explorers trying to escape a lion — one of whom searches for a cave the two can hide in, and one who puts on his running shoes because even if he can’t outrun the lion, he can outrun his partner — Sacks said the problem with Darwinian evolution is that it doesn’t account for why altruism would get passed on to future generations.

Yet Darwin realized this oversight, and in turn argued (in effect) that “we handle our genes as individuals, but we only survive as members of groups,” Sacks said. And the survival of the group relies on the self-sacrifice of altruists.

Except, that is, in faith communities.

“Religion is the great source of community in the contemporary world,” Sacks said.

The last area of influence is on society; the part of modern life that, unlike the market or the state, is defined by “culture and our shared values and the way we act toward one another.”

“Society is about relationships that don’t depend on wealth or power,” Sacks said.

Western society used to have “strong voluntary associations.” In the United States, this was conceived of as a covenant — a powerful sense of collective responsibility embedded in phrases like “We the People,” bringing together immigrants from all different cultural backgrounds.

But as secularism rose, the covenant was replaced by the much more transactional, individualist idea of a social contract. The state grew bigger and bigger, and society grew smaller and smaller.

“The winners win big and the losers lose big, and you don’t have the sense of shared identity … (and) half the people find themselves as strangers in their own land,” Sacks said.

So, Sacks said, when a civilization loses its religion it also loses its families, communities and society.

Western freedom is not the “default setting of the human condition,” he said, and the changing “weather patterns” of cultural climate change mean that a loss of religion spells a corresponding loss of things like the sanctity of marriage, the bonds of community and the social covenant.

“Religion is not about to die … but the sanctity of the West is in real trouble,” Sacks said.

Quoting historian Will Durant, Sacks added that “society and its religion tend to fall together.”

Religious communities, then, have three options for dealing with society going forward. They can attempt to conquer it, as radical Islam does; they can withdraw from it, as with the Benedict Option; or they can work to inspire humanity and give it hope.

The first option causes the Dark Ages, and the second one persists through it. But, he said, only the last plan averts such a crisis completely.

“Religion can be … engaged with the world … not in retreat from (it),” Sacks said. “And if we can do that, we might just bring those two cars closer together. We might just find we can keep our feet in society and our head in religion.”