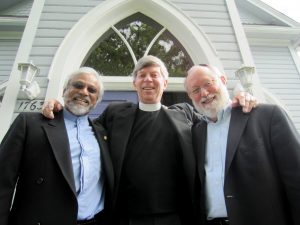 Don’t be fooled by the name: Unlike the 1986 comedic classic “Three Amigos,” the Interfaith Amigos aren’t just a laughing matter.

While they are a distinctly comedic religious association, the group has its interfaith origins in the aftermath of 9/11.

After the dust from that catastrophe settled and the nation went into mourning, the first person Rabbi Ted Falcon called was Imam Jamal Rahman.

The two first met each other while serving on the board of a group that was trying to start a university.

“I called Jamal and invited him to come to the Shabbat service that Friday, because people had to see a different face of Islam than the one that was being broadcast in the media,” said Falcon, a Reform rabbi and spiritual therapist, teacher and writer. “That was the first time we heard each other teach, and we enjoyed it very much. He and I started doing interfaith programs together.”

Six months later, the two reached out to Pastor Don Mackenzie to “bring him into celebrating the first-year anniversary of 9/11” which they did at his church.

“And after that we said, ‘We can’t stop now,’ ” Falcon said. “We kept meeting. We had no idea what would happen.”

The Interfaith Amigos got their name from a 2008 article headline in the Chicago-based magazine, The Christian Century  —  “Three faiths, three friends: Seattle’s interfaith amigos,” according to Falcon.

In addition to their lecturing, the three have published books together, including Religion Gone Astray: What We Found at the Heart of Interfaith.

“Our writing process is: Ted writes the first word, Jamal writes the second and I write the third,” joked Mackenzie, a retired minister and head of staff at University Congregational United Church of Christ. “We actually meet weekly, and when we’re writing a book we spend a lot of time brainstorming about what the book should be about. Once we get the idea generally, the book has a one-voice introduction — a chapter with an introduction in one voice — and then each of the three of us commenting on the topic of the chapter.”

The Interfaith Amigos’ devote a great deal of attention in their writing and public speaking on the exclusivity present in all three of their religions.

The bedrock of the Interfaith Amigos’ religious kinship comes from a mutual desire to break down perceived barriers between Judaism, Islam and Christianity, according to Mackenzie.

“If we did that, we thought there’d be a better chance that the purposes of religion and spiritual practice could be realized in facing the troubles the world has right now,” Mackenzie said.

The Interfaith Amigos believe that friendship between members of different faiths is essential in today’s political and social climate.

“The key to overcoming polarization is friendship,” said Rahman, a co-founder and Muslim Sufi minister at Interfaith Community Sanctuary in Seattle, and an adjunct faculty member at Seattle University. “And not just ad-hoc friendship, meaning: meeting only at Christmas time or Rahmadan time, or high holy days. The key is really establishing an abiding, heart-to-heart human friendship. That is the best way to overcome religious, cultural or political polarization.”

Rahman said the interfaith group represents a model for overcoming such polarization.

To sum up the Interfaith Amigos’ sense of purpose, Falcon invoked the words of Hans Kung, the Swiss theologian and author:

Prince of Peace Born Out of ‘Chaos of the Barnyard,’ Rev. Susan Sparks Says