“I appreciate the presence of God in silence and in the outdoors,” said Candler, a lecturer and the dean of the Cathedral of St. Philip in the Episcopal Diocese of Atlanta. “I grew up on a farm, so I still appreciate being outside. To me, there’s something about the early morning darkness that speaks of God’s power.”

And God’s power is exactly what Candler will speak on today. 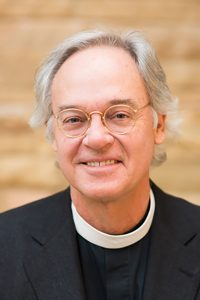 At 2 p.m. today in the Hall of Philosophy, Candler will conclude Chautauqua’s Interfaith Friday lecture series with another unique Christian perspective on the problem of evil in religion. Candler will be joined in conversation by the Rt. Rev. V. Gene Robinson, Chautauqua’s vice president of religion and senior pastor.

“It’s a familiar problem,” Candler said. “And it gives me a chance to collect one of my most provocative talks on that subject.”

Candler has included his liberal view on Christianity and his sense of optimism in lectures all over the world, including in England, Costa Rica and Canada.
“A lot of times, people want to hear from a different culture,” he said. “There are a lot of different attitudes towards the United States these days, so I consider myself a spokesperson for the progressive Episcopal Church.”

One message Candler champions in his preaching and lecturing is the importance of interfaith relationships.

“I enjoy interfaith relationships,” he said. “I believe the future of spirituality is to understand and to appreciate different faith traditions.”

Along those lines, Candler is a member of The Faith Alliance, the interfaith network of the City of Atlanta.

“That group was especially active after 9/11,” he said. “It was important for people from different faith traditions to appreciate each other, especially during accusations of violence. We went on some trips with Christians, Jews and Muslims together: 10 Christians, 10 Jews and 10 Muslims living and traveling with each other.”