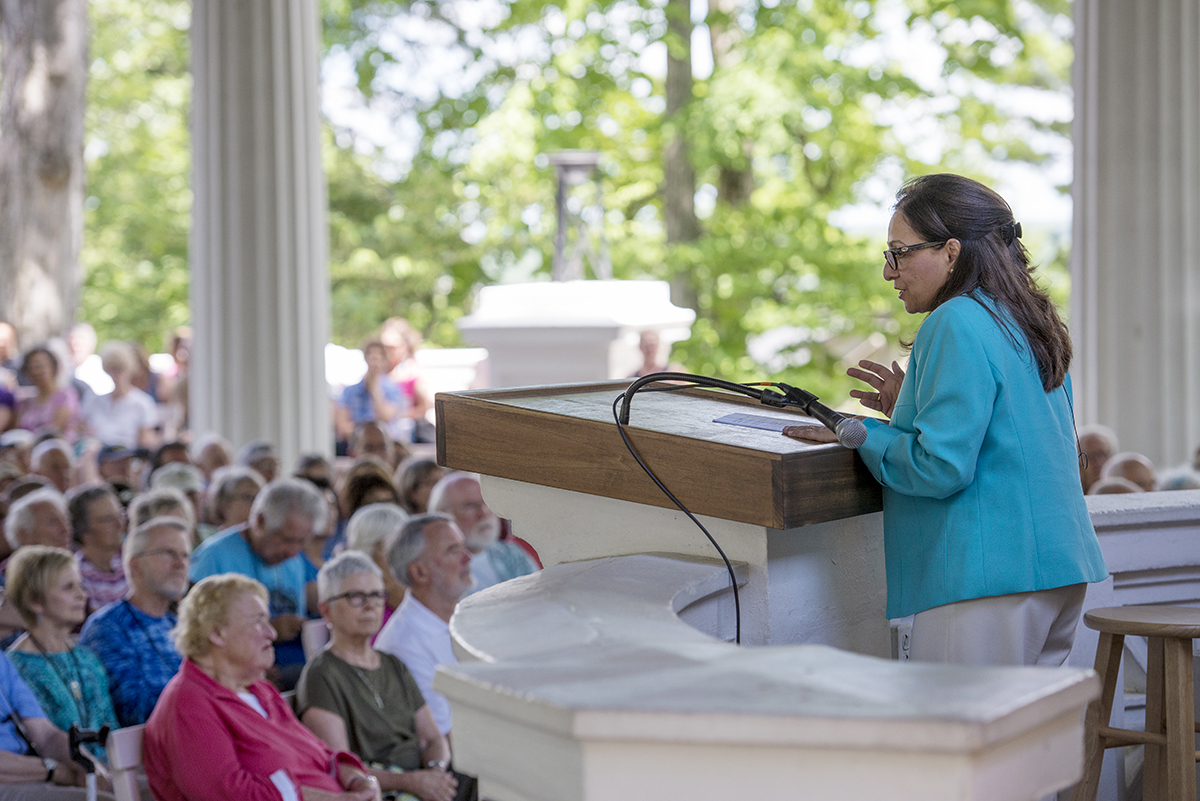 Friday’s Interfaith Lecture hadn’t even begun, and the applause had already started for Sr. Joan Chittister, O.S.B., who closed the week on “Moral Leadership in Action” with Muslim activist Daisy Khan.

The conversation in the Hall of Philosophy, facilitated by former Chautauqua Institution Director of Religion Joan Brown Campbell, focused on Chittister’s and Khan’s life experiences and faith backgrounds, as Campbell asked four questions on how women can lead.

What does it mean to not just talk about leadership, but to live it?

Khan, founder of the advocacy group Women’s Islamic Initiative for Spirituality and Equality, said Muhammad taught that each person is a shepherd to his own flock; each person leads by example and the best leaders are those who are introspective, examine themselves and risk uncertainty in paving a new path.

She gave a verse from the  Quran that tells of a devoted female follower of Muhammad who asked why all of the revelations were addressed to men. The Prophet remained silent, and then a revelation came: “Surely all men and women who submit to me, all believing men and women, … God has prepared forgiveness.”

In 2003, Khan received a similar question. As she was speaking on behalf of her husband, Imam Feisal Abdul Rauf, an old lady asked a question about women in Islam. Khan rattled off a series of answers about all the rights Muslim women have. The old lady listened patiently, Khan said, and then asked, “But what are you doing about it?”

The question made Khan reassess her life and led her to advocate for Muslims, and Muslim women in particular, across the globe.

Chittister gave a tongue-in-cheek answer. She said women’s position in society is analogous to that of a camel in the San Diego Zoo: blessed with prodigious natural gifts but boxed in by man-made restrictions.

“So a leadership question is a little out of sync for women,” Chittister said.

Agreeing with Khan, Chittister said true leaders are those who advance the central questions of the age. But for women, Chittister said, attempts to advance questions, particularly questions pertinent to women such as childcare and equal pay, are often met with resistance.

“[A woman] risks total rejection, attacks on her personality by the people and institutions that she may value most, her husband, her family, her church,” said Chittister, who’s been personally attacked on dozens of right-wing websites in the past few years alone. “If she points out injustice, she’ll be accused of whining and complaining.”

In Nigeria, a raped woman is forced to marry her rapist, Chittister said. The U.S. doesn’t have that problem, she said, but a student is ignored when she tells the college president she was raped.

Leadership can be risky. Do you believe that risky leadership is actually acknowledged?

Khan said she has not received any threats from Muslims because she advocates in their language. Instead of providing secular reasons that honor killings and female genital mutilation are wrong, her organization provides arguments built on the Quran and Islamic tradition to prove that those are not proper manifestations of Islam.

“Our six position papers are so thorough that we have shocked people into submission,” Khan said.

Yet Khan said she has received virulent opposition from outside the Muslim community. Khan and her husband were two of the leaders of the proposed “Ground Zero Mosque,” the Muslim community center two blocks from Ground Zero that drew sharp backlash from conservatives who called it an insult to 9/11 victims and a “victory memorial” for Islam.

Khan said she prayed and kept faith, but recent events have only made things worse.

Chittister said much of the opposition women face comes from religion. Genesis says God made Adam a woman, עֵזֶר כְּנֶגְדּוֹ [ezer kenegdo]. That Hebrew phrase appears in Scripture 30 times and, in all 29 other times, is translated as “power equal to,” Chittister said. Yet here, the English translators wrote “help mate.” In other words, God made woman as a helpmate to man.

“Imagine what would happen to women if it said, ‘And Eve was made as a power equal to Adam,’ ” Chittister said.

Instead, for 2,000 years, religion dictated the subordination of women to the point that into the 20th century, the Catholic Church opposed women’s suffrage, Chittister said. Today, the societal legacy of that discrimination continues. Although seven out of 10 startups are founded by women, Chittister said, women receive only 7 percent of money from private investors. Women in politics receive little money for their campaigns as well, she said.

“We celebrate their political aspirations as ‘Isn’t that quaint,’ ” Chittister said. “As if they were frogs that fly.”

What are we talking about when we talk about women in leadership?

Because leaders are not ordained in Islam but rather chosen by the community, Khan said, there have been many Muslim women leaders in history. She said the Quran cites the Queen of Sheba as a particular noteworthy example. In the Quran, the queen receives a letter from King Solomon requesting that Solomon visit her city. The queen says kings despoil any city they visit and decides she will send Solomon a gift instead to avert disaster.

“Quran talks about her method of leadership as transparent with public consultation … as being wise and noncoercive, focused on the future, and for that reason she is trusted and pointed as an exemplar of leadership,” Khan said.

Chittister quoted a Business Insider study of competencies for leadership, and said women were found to be more collaborative, had better relationship skills, and were better at teamwork — skills that led to women scoring higher on overall leadership effectiveness.

Would you have it any other way?

Khan answered personally, saying that for years she had wanted a child and was devastated she could not conceive. But because she didn’t have kids she was able to travel the world and help Muslims across the globe. No, she said, she would not have it any other way.

Chittister answered for women as a whole. She said she wanted women to be paid equally, to work equally in business, be able to walk the streets safe at night and to not be victims of domestic abuse.

“Most of all, I want to hear these things said in the pulpits and beemas and minbars of the world on Mother’s Day,” Chittister said.