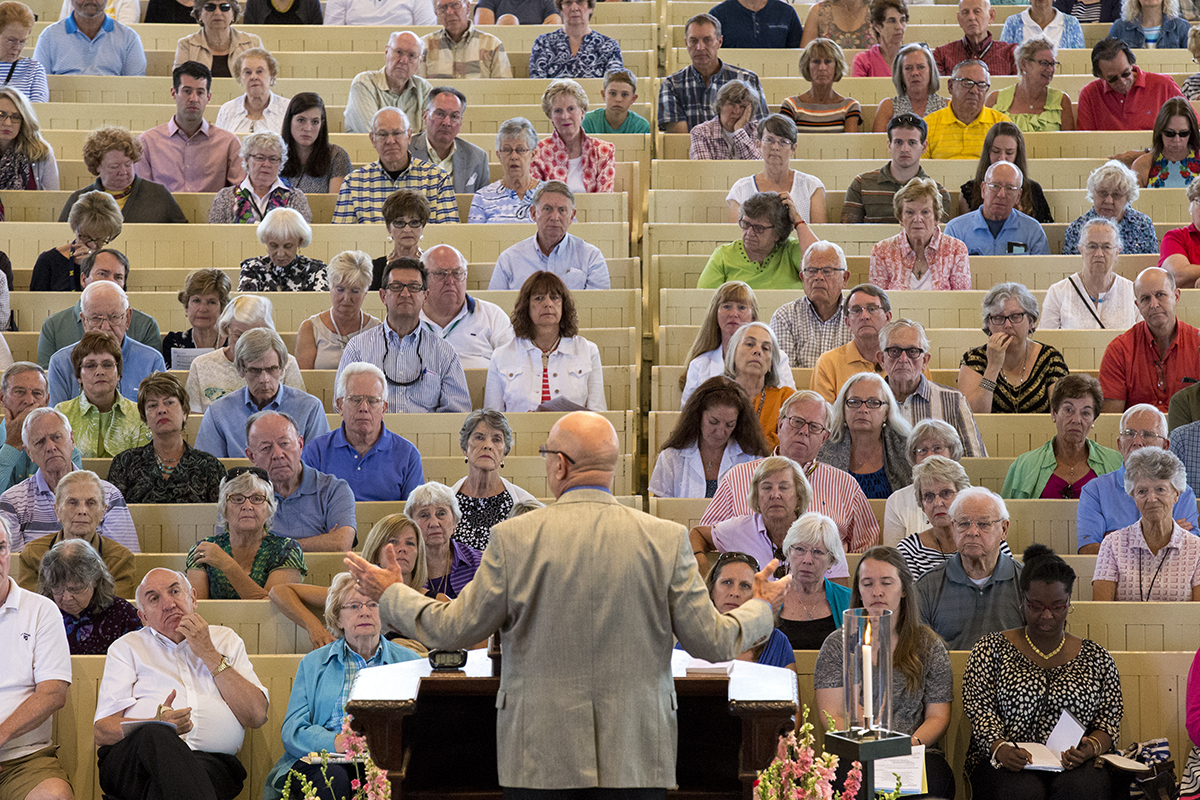 “It has been a terrible couple of weeks; death, anger, hatred and accusations have torn this nation apart. I can’t remember when America was so divided. We have the police on one side and Black Lives Matter protesters on the other, and there are pundits who have all the answers,” said the Rev. Tony Campolo, chaplain for Week Four, at the 10:45 a.m. Sunday morning worship.

His sermon title was “Becoming Human” and the Scripture reading was 1 John 3:1-3.

Thirty percent of African-American youth go to jail before they are 35 and when they are arrested, they stay in jail for three to six months because they are poor; they don’t have money for bail, he said.

“We know what prison does. It hardens people and they become more prone to crime,” Campolo said. “Prison destroys their value and worth, and 80 percent end up back in jail. It is an endless repetition. There is something wrong with the system. African-Americans are only 13 percent of the population and are 44 percent of the prison population.”

In addition, several states take away their right to vote so they are rendered politically powerless. He noted that in schools in Camden, New Jersey, less than 50 percent of students graduate and of those who do, 30 percent are functionally illiterate.

“These institutions are the principalities and powers,” Campolo said. “It is our responsibility to call them into submission to the Lord so they function for the good of society.”

“In the midst of this situation, the church has a special obligation to be an agent of reconciliation between the police and Black Lives Matter,” he said. “Remember that where there is no justice, there is no peace, so we have to work for justice even as we pray for peace. Jesus prayed that people would become one as he and God were one, that a broken people would be unified. Mass incarceration is not the answer.”

We should ask our presidential candidates what they are going to do about the situation and “stop picking apart their past mistakes,” he said. The church is not the answer anymore, he said, but is a big part of the problem. The most segregated hour in the country is still 11 a.m. Sunday. Even the Chautauqua audience is not integrated, but overwhelmingly white.

“People go to an African-American service and say it the most inspiring one they have been to in a long time,” he said. “Why don’t you join? The affluent white church does not need you; the African-American church needs you.”

He said there is some truth to the belief that people need to be born-again, but when David Duke, head of the Klu Klux Klan, ran for governor of Louisiana, 60 percent of those who claimed to be born-again voted for him. When Billy Graham went to organize a crusade in Jackson, Mississippi, he met with local pastors. An African-American preacher, John Perkins, asked Graham what he wanted to happen in Jackson. Graham said he wanted everyone to be born-again. Perkins told Graham, “Since I was knee-high, I have been dumped on and humiliated, almost always by those who call themselves born-again and now you want everyone in Jackson to be like that?”

Campolo said after school desegregation in the South in 1954, many evangelical churches turned their Sunday school buildings into private academies.

“Most have developed beyond that but the Evangelical church tried to get around school desegregation,” he said. “This does not bode well for Christianity.”

He joined an African-American church when he was 19. Hearing preachers who preached the Bible as they were reading the text helped him to see the Bible through the eyes of black people. Jesus is the champion of the poor or oppressed, whoever they are, he said. Woman, gay or black, to be a follower of Jesus Christ is to be a champion of the oppressed.

In his first sermon in Nazareth, Jesus said the spirit of the Lord was upon him and he declared the jubilee year, thereby declaring himself the Messiah. The people tried to run him out of town, but he told them God loves all those who worship in spirit and in truth.

“Religion should be the great unifier,” Campolo said, “Let repentance begin in every house of faith.”

The only miracle that will bring about reconciliation is that the Holy Spirit will invade people’s hearts and minds and transform them from within.

“We have to present ourselves as living sacrifices, and not be conformed to this world, and I add this racist world, but be transformed by the Holy Spirit,” he said. “Transformation by the Holy Spirit is greater than anything the world can offer.”

He noted that in Pentecostal churches, integration has occurred in a way it has not in mainline Protestant churches.

“They have experienced something,” he said.

Campolo said we need to learn new ways to pray that are not lists of “non-negotiable demands give to the Almighty like my son who announced that he was going up to bed and he was going to pray and did anybody want anything.”

Simple surrender to Jesus Christ was the answer, letting him send the Holy Spirit to transform you from within, Campolo said.

“I can’t do it in preaching. You have to focus on Jesus on the cross, reaching out across time, and let him cleanse the racism out,” he said. “Americans need the cleansing that only God can bring about.”

We need legislation for justice, but we need to know that in the end there is a force in the universe called the Holy Spirit. Prayer becomes an agent for change and those who surrender will find change.

“Those who wait in silence and stillness will find the Holy Spirit. Every morning I wait for the Holy Spirit to invade me,” Campolo said. “When someone asked me, ‘When were you filled with the Holy Spirit?’ I answered, ‘This morning.’ ”

God wills us to surrender to the Spirit and the Spirit will transform us and we will be new in the Lord, he said. John Wesley, after coming home from a revival was asked by his brother if many were added [to the church] and Wesley replied that not many were added but they were blessed by a host of subtractions.

“Revival begins when we get the barriers out of the church,” Campolo said.

“We need to say stop to both sides. To the police we need to say weed out the rotten apples. To Black Lives Matter we need to say it doesn’t help [to call for the death of police officers]. We have to stand up in the name of Jesus and say stop,” he said. “We have to work to end hatred; don’t let people get away with semi-racist statements. Please stand and sing with me: ‘We Shall Overcome.’ ” And the congregation did.

The Rev. Robert M. Franklin, director of the Department of Religion, presided. Kyle Keogh, a managing director of Google Fiber and a member of the Chautauqua Institution Board of Trustees, read the Scripture. Pati Piper and Peter Steinmetz served as cantor’s for Responsorial Psalm 100, “We Are God’s People,” with a setting by David Haas. The Chautauqua Choir, under the direction of organist and coordinator of worship and sacred music Jared Jacobsen, sang “We’re Marching to Zion” for the hymn-anthem. The words were by Isaac Watts; Robert Lowery wrote the music and refrain and the setting was by John Ferguson. Piper served a soloist for the anthem, “Light of a Clear Blue Morning” by Dolly Parton. Barbara Hois provided flute accompaniment. The offertory anthem was “My Eternal King” by Jane Marshall with words from a 17th century Latin poem translated by Edward Caswall. The organ postlude was “Toccata in D Major” by Marcel Lanquetuit. The Edmond E. Robb-Walter C. Shaw Fund and the J. Everett Hall Memorial Chaplaincy provide support for this week’s services.