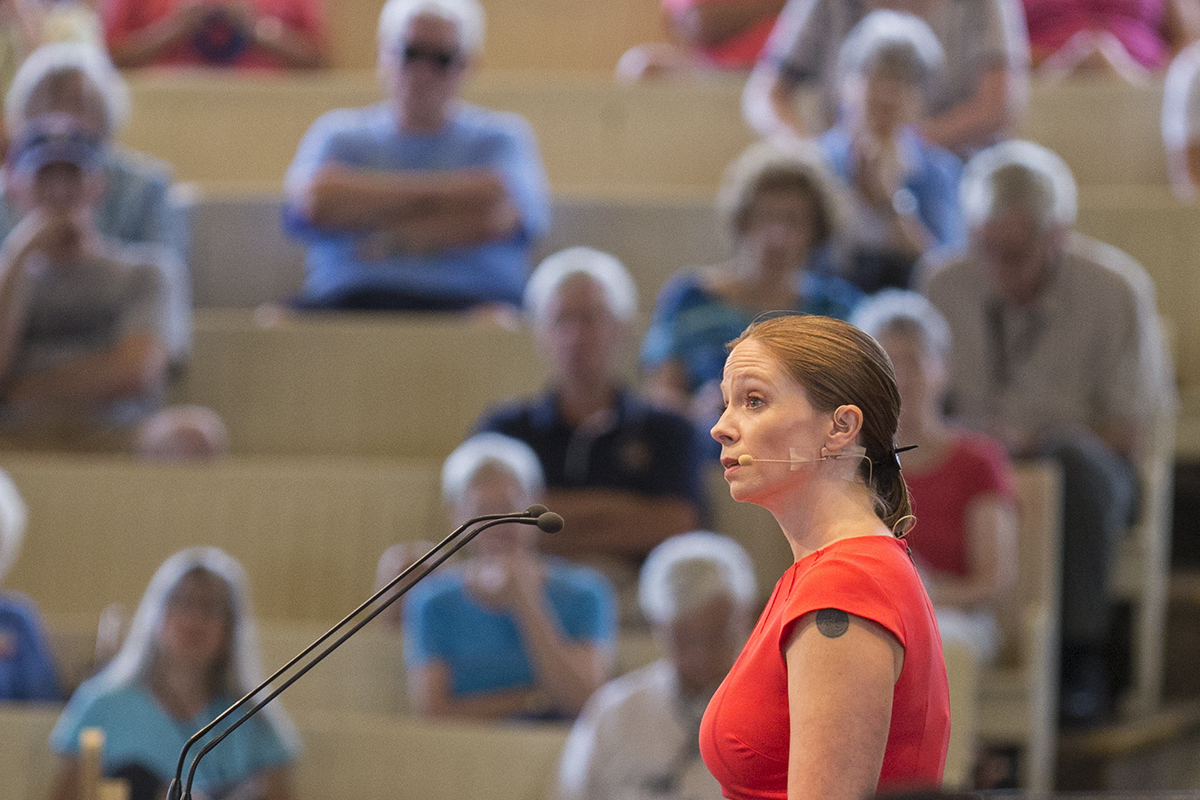 Once when Kayla Williams walked her dog in the park near her home, a man asked her if her three-legged German shepherd lost his leg from an improvised explosive device, or IED. She replied that he was not a retired military dog, but had lost his leg after being hit by a car.

As Williams walked away, she realized the man thought it was more plausible that her dog was a retired veteran than her.

Williams, a former sergeant and Arabic linguist in a Military Intelligence company of the 101st Airborne Division, spoke about her experiences as a female military veteran during the 10:45 a.m. Tuesday morning lecture in the Amphitheater. She discussed the challenges of being a woman in the military and how she adjusted to civilian life after retiring from her military career.

“Many people still don’t think of women when they consider the changing nature of war and those who are fighting it on behalf of our nation,” said Williams, currently the director of the Center for Women Veterans at the U.S. Department of Veterans Affairs. “When most people envision a soldier, I’m not what springs to mind.”

Since the founding of the United States, more than 2 million women have volunteered to be a part of military services. Williams said it began with the Revolutionary War, when women served with their husbands or disguised as men.

Today, Williams is one of 300,000 women who served in Iraq and Afghanistan since 2001. Because women are not a part of the draft, Williams emphasized the importance of acknowledging that those women volunteered to serve for their country- — whether it was out of patriotism, honor or duty.

After graduating college, Williams bought a car and a house, got a job and had a steady boyfriend. Though it seemed she knew what direction her life was heading, she felt as if she never truly challenged herself. She also wanted to go to graduate school, but had no way of paying for it.

“I felt like I was digging myself this really careful rut — doing everything I was supposed to do, but not because I chose it,” Williams said. “I was also looking for a real challenge, to do something I didn’t know I could succeed at. The military was certainly that. I had no idea whether or not I could make it.”

Williams enlisted in the Army in January 2000 and became a linguist. She said she thought it was amazing to get paid to learn a foreign language instead of paying someone to teach her. She was instructed to learn Arabic and was studying the language when the attacks on the World Trade Center happened on 9/11.

“It was immediately apparent that my military career was going to be very different than I had otherwise imagined,” Williams said. “It was no longer a question of whether or not I would go to war, just when and where.”

The men she worked with in Baghdad would refer to her as “the linguist who helped them in Baghdad.” However, she had many encounters where men would call her “the chick with them in An Najaf.”

“That focus on my role and what I could do to help accomplish the mission — treating me as a valued member of the team was really profoundly important,” Williams said. “I know a lot of that had to do with how their commander treated me.”

Today, Williams advocates for the rights of women in the military and to spread an awareness that women can be military veterans. She shared a story about a female veteran who found a negative note under her wiper blade on the windshield of her car, chastising her for parking in a space reserved for veterans.

Though Williams served in Iraq, she felt a disconnect with the other veterans. When she went out for drinks with other veterans, Williams said the bouncer often would call out, “Hey, get these guys some drinks.”

“They meant, very literally, the guys,” she said. “There was this assumption that women who were there were girlfriends or wives. We weren’t ourselves service members, although we had shown the same ID cards.”

There were times Williams felt invisible, but she realized the only vision of women in military that people were aware of were Lynndie England, a convicted war criminal and torturer, and Jessica Lynch, the first woman in American history to be taken as a prisoner of war.

“These were women who, due to the way media coverage worked, had not been presented as full humans,” Williams said. “They were real cardboard cutouts of the heroine and the villain, not rich, full individuals.”

In response, Williams wrote her first book, Love My Rifle More than You: Young and Female in the U.S. Army. She wrote the book out of a desire to share her story and to give a deeper look into who these female military veterans are.

Williams felt a disconnect from civilian women, too. That became apparent when she attended a bachelorette party. She was outside on a deck smoking with another woman, who was startled when a bird flew out of a nest beside her.

The women exclaimed it was the “scariest moment of her life.” Williams couldn’t help but laugh out loud, knowing she had seen and witnessed far scarier moments.

That gap was filled when Williams joined a book club specifically for women veterans. There, she was able to make friends with women who understood her situation. She said joining the book club made her “feel truly home again.”

“Those connections to a community have been profoundly meaningful,” Williams said. “I’m very honored now to serve in a new way, advocating on behalf of women within the Department of Veterans Affairs.”

Adapting to civilian life was difficult for Williams. She met her husband in Iraq while in the military. Together, they adjusted back into their lives. They got married, adopted a son and gave birth to a baby girl, but Williams knew there was still something missing in their life.

Her husband Brian McGough suffered from a severe brain injury after a roadside bomb went off, sending a piece of shrapnel through his brain. After the couple married, McGough began to have severe mood swings that sometimes resulted in violent outbursts.

However, life for McGough and Williams began to improve after hitting rock bottom. The couple had a fight so intense it ended with Williams calling the police and leaving. The next morning, Williams injured her ankle while rock climbing. McGough had to take care of Williams while she rested her ankle.

Williams said that role reversal is what sent the couple into a positive, upward spiral. Her husband had a reason to get up and do something as he became the caregiver, and Williams understood what it was like to feel helpless and stuck in a bad situation.

McGough got a job, which resulted in less drinking because he knew he would have to wake up in the morning to go to work. His confidence and self-esteem grew, but Williams recognized they still weren’t happy.

That changed, however, when the couple ran into a friend from Iraq who worked for a veteran nonprofit organization. They began volunteering at the organization, and McGough eventually got a job working there before accepting a job with the Department of Veterans Affairs.

“We were able to forge meaning from our suffering by working to improve the lives of others — by sharing our stories of how we slipped through the cracks,” Williams said. “The company of other veterans was profoundly healing.”

As McGough’s situation and disability improved, he began to see his brain injury in a new way. Many veterans remember the day they were injured as their “Alive Day,” but McGough remembers Oct. 17 as his “Phoenix Day.”

“It’s not about surviving and trying to get back to the way things used to be,” Williams said. “It’s about finding your new normal as a completely renewed individual. We really don’t give enough attention to the concept of post-traumatic growth. It is because of, and not despite, our suffering that Brian and I have forged deeper connections to the larger community.”

Williams compared their journey after the war to a stock market graph. It has an upward movement, but, zoomed in, there are jagged edges of downfalls. She said less than 1 percent of her generation served in the military, and even fewer suffered a severe brain injury like McGough.

“We are living proof that for many who are struggling with the physical and psychological wounds of war, there is a path back from the brink of despair to a meaningful existence,” Williams said. “All of us as citizens have an obligation to ensure that services are in place for those who need them. The wars we have fought, both at home and abroad, may have shaped all of us as veterans, but they will not define us.”