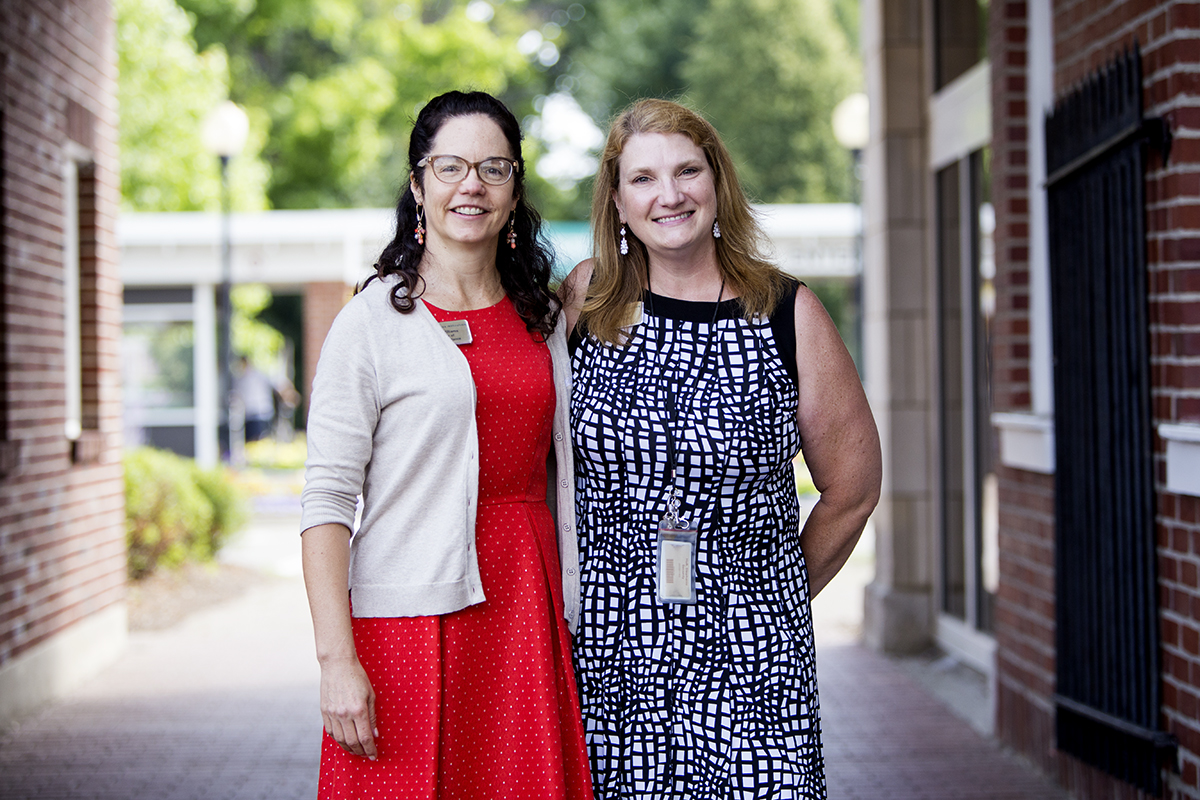 Chautauqua Institution is renowned for bringing treasures from afar to its Schools of Fine & Performing Arts, as well as its mainstages and speaker platforms. Less well known are treasures it has attracted to its staff from Chautauqua County.

Whether or not they realize it, Stephanie Holt, seasonal manager of the Lost and Found office, and Karen Williams, year-round director of guest experience, are two such treasures. At 9:15 a.m. Thursday at the Chautauqua Women’s Club House, they will present “Treasures Seen and Unseen” as part of the Chautauqua Speaks series.

“We go way back to when our grownup kids were kids in Westfield, [New York],” Williams said.

“I was her daycare provider,” Holt said.

Both were officers of the Westfield Women’s Organization. When Holt was the secretary, her meeting minutes were unique. She said she would either write them to rhyme or as correspondence to and from her mother.

Holt was born in Kalamazoo, Michigan. She moved with her family to Clymer, New York, when she was in high school and with her husband to his hometown of Westfield, New York, after they graduated from college.

“I’m a better fit in the library,” Holt said. “I liked being in special education. I wasn’t burnt out; it taught me patience, which is a good thing.”

In-season, Holt has worked at Chautauqua since 2008 — the summer the Institution began scanning gate passes. Every season thereafter, she has organized and staffed the Lost and Found office on behalf of the Chautauqua Police department, infusing her public relations responsibilities with a large dose of humor.

See for yourself by perusing the messages posted by “Lost Found” on the Chautauqua Grapevine website. Holt’s missives are eye-catching: “On the Brink” (Aug. 6), “Oar in Luck” (Aug. 4), “Bedding down for the week” (July 29) and “Bellzon and Off” (July 25).

“I have a little following that send me messages,” she said.

In “Yankees Fans and Finders Keepers” (July 23), Holt wrote in part: “I’m searching for several valuable pieces of jewelry that have been lost this year. If you turn something you adore in, I promise to take down your information in case the item that you turn in is not claimed. … However, if you do not wish to re-claim the item you found, it goes into my stash of ‘Lost Treasures From Days of Yore’ which I do not ever sell — I hold out hope that someday they will be reunited with their ecstatic owners (and this does happen from time to time). If you are wondering if I am begging you to turn in jewelry that you find, then you have read this post correctly. I hate it when people leave my office sad because I do not have their item.”

Like Lucy in the late Charles Schulz’s “Charlie Brown” comic series, Holt said she often gives “psychiatric support for 5 cents. People are upset. They like to feel that someone cares and is trying to help them. Though it may not be a valuable item, it’s valuable to them.”

When it comes to Chautauqua’s busy Lost and Found office, two questions in particular are on people’s minds.

Those who venture to the CWC House Thursday morning will find out why not and what Holt does instead.

Williams became the Institution’s customer experience manager in 2014, and was promoted to director of guest experience following the 2015 season. This summer, she is supervising 80 people. Her beautiful depiction of Chautauqua throughout the year is well worth hearing in person. And examples of her thoughtful and playful responses to staff fatigue during the season, particularly after Week Four, are well worth seeing, feeling and even tasting in person at the CWC House.

Originally from Rochester, New York, Williams said she met her husband in college and in 1984, they moved to Westfield, New York. For 10 years, she was the HR representative in charge of community relations at Westfield Memorial Hospital.

“Anything that did not involve blood, I took care of,” she said.

It was she who arranged for WMH’s Primary Care Clinic to be located at Chautauqua Institution in 1988. Twenty-eight years later, it is still operating near the Amphitheater, at 21 Roberts.

During the next 14 years, Williams worked long distance for the corporate marketing group of a telecomm company based in Charlotte, North Carolina. She headed a large data group and traveled frequently to New England on business.

“My job changed every 18 months,” she said. “Pretty much for whatever wasn’t working well, they sent me. I was traveling every other week.”

Downsizing and moving to Mayville, New York, with her husband, Williams began the next phase of her career. She said she worked in business relations for Alstar, a private ambulance company based in Jamestown, New York, for just more than a year. Driving throughout Chautauqua County in her own business car, she came to know it well.

From Alstar, Williams joined Chautauqua’s Marketing and Communications office. She said her job was created to include ticketing and gate operations, switchboard operations and the information office. The latter includes the Main Gate Welcome Center and the Visitors Center in the Post Office Building on Bestor Plaza.

“They wanted customer service to be equally strong across all departments,” Williams said. “I help people get access to the grounds to enjoy their stay, and once they’re on the grounds, I make sure they have an outstanding experience so they’ll come back next year with family and friends.”

She has provided her staff with troubleshooting tools that were not used in the past in order to assist them with their work. One such tool is a clever key chain with small, laminated cards containing practical information they must be conversant about.

Williams is also responsible for assisting in the recruitment and orientation of seasonal staff. She said that during the off-season she attends college and high school job fairs, and she looks for retired employees who are accustomed to making decisions, including teachers.

“People give me helpful ideas,” Williams said. “I’m working with people who are very successful in life.”

At the CWC House, Holt and Williams will demonstrate how they have been transforming good ideas into effective action throughout the season.