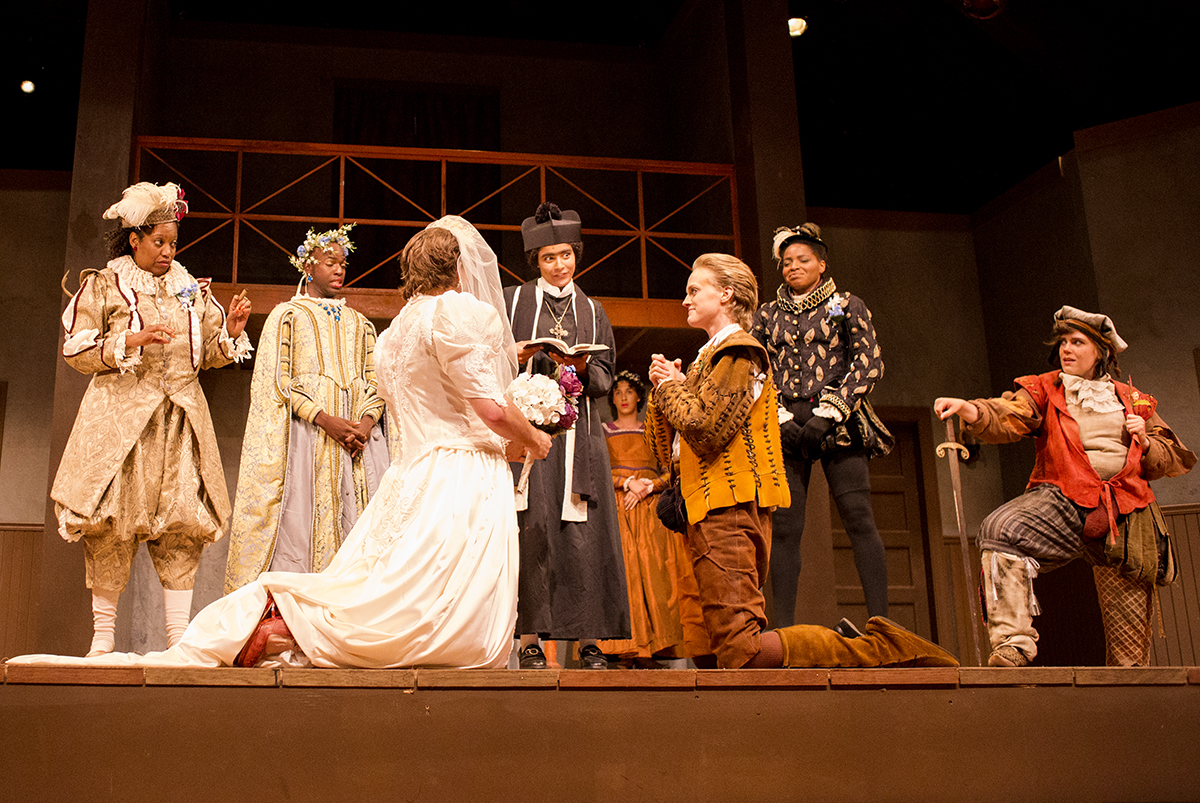 She’s been working her way up the costume ladder at Chautauqua Theater Company since 2013. This year, she’s hit the big time as the costume designer for The Taming of the Shrew.

Shrew, directed by CTC Artistic Director Andrew Borba, is a new take on the Shakespeare classic that features men playing the women’s roles and women playing the men’s. It continues its run at 2:15 p.m. and 8 p.m. August 17 in Bratton Theater, with a post-show discussion after the 2:15 p.m. performance.

O’Neill, who used to help her mom make dresses as a child but didn’t get into costume design until college, came to Chautauqua as a design fellow in 2013, after her first year of graduate school at the University of California, San Diego. She came back in 2014 as assistant costume shop manager and in 2015 as shop manager.

She likes the provided housing, but keeps coming back for the people.

“I don’t see my family a lot, so it’s really fun to make new family members and everyone here has such a brilliant mind that it’s very fascinating to learn their stories,” she said.

This year, she moved to New York City, where she works three jobs in addition to costume designing. Her resume for the year includes working as associate designer for a play called Fulfillment, which was directed by former CTC Co-Artistic Director Ethan McSweeny, and serving as production assistant on the film “Barry.”

There’s no denying that O’Neill is busy this summer. At least one night leading up to Shrew, she came home at 3 a.m. and left again at 6 a.m. She usually begins working on Shrew at 7 p.m. when the costume shop closes.

She said a lot of costume design is paperwork and accounting.

“It’s like a solving a math problem every time,” she said.

For Shrew, she found it easier to dress women as men than vice versa.

“Creatively, my biggest approach has been to really showcase for [the lead female character, played by Andrew Richardson], who’s the misogynistic man, to really put him in everything that has been horrendous that women had to wear during the period,” she said.

That includes a dress, corset and high heels. She had to order a large corset and tailor it to Richardson’s body shape.

The men playing women’s roles are not meant to actually be women, but instead are men playacting as women as part of a trick. For that reason, O’Neill decided not to put them in wigs.

Chautauqua’s fast-paced  schedule doesn’t allow for building new costumes, so everything has to be ordered, sometimes unconventionally.

Richardson wears a wedding dress in the show that gets torn up and stained in a later scene, which means O’Neill needed two identical dresses. In order to make it happen, and for less than $200, she found two similar ’80s wedding dresses on Etsy that had the puffy sleeves that were popular in Shakespeare’s time. After some TLC, they were ready for an Elizabethan bride.

O’Neill has been in discussions on the show’s costumes since February, and half a year later, it’s all come together.

“Finally understanding what we want to do within the gender swapping, how far we want to be taking it and what we want to actually be communicating both [in terms of] comedic and making a social point is really nice,” she said.