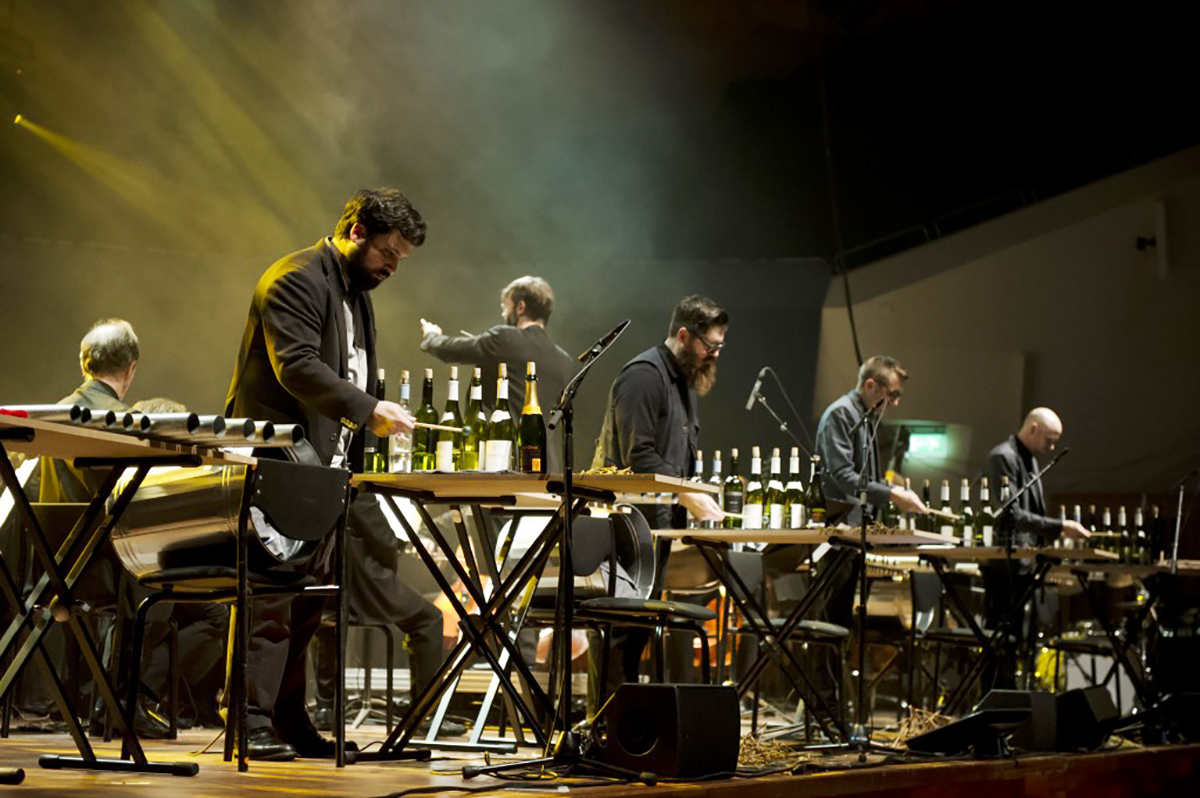 The chord stick is a cross between an electric guitar and a hammered dulcimer. Only four exist in the world, and they belong to each of the four members of Sō Percussion.

The instruments, which were specially designed and created for the percussion ensemble, are only some  of the many out-of-the-ordinary objects Sō Percussion will play at 4 p.m. Monday in Elizabeth S. Lenna Hall as part of the Logan Chamber Music Series.

The group, consisting of musicians Eric Cha-Beach, Josh Quillen, Adam Sliwinski and Jason Treuting, will also make music on tin cans, glass bottles, ceramic plates and even a conch shell with the end sawed off.

“Part of being a percussionist is that you have a wide-open palette of sounds you can use,” Sliwinski said. “You are not playing the same instrument all the time.”

Both the design of the chord sticks and the composition of one of the pieces they will perform Monday, specifically written for Sō Percussion, were the creations of Bryce Dessner. Dessner plays guitar for indie rock band The National and participated in the composition of the score for the 2016 film “The Revenant,” which earned a Golden Globe nomination for Best Original Score.

All graduate students together at Yale University, the members of the band found themselves under the guidance of a teacher who, Sliwinski said, had a great interest in percussion chamber music.

The band started playing together at school. Fifteen years ago, they picked up some gigs outside school and Sō Percussion — named “Sō” after the Japanese word meaning “to play” or “to offer sound” — caught on.

While the band has its roots in classical music, Sliwinski said the repertoire for entirely percussion chamber music is limited. Beethoven and Mozart never wrote pieces solely for drums, cymbals or keyboards, much less chord sticks and conch shells.

Therefore, the band must get creative, adopting some classical pieces, along with contemporary works and their own compositions. Monday’s concert will feature selections by John Cage, Andrea Mazzariello and the band’s own Treuting.

Sliwinski described the excitement of Cage’s “Third Construction” as a “barn burner.” Mazzariello’s composition “Baby Bot” requires the musicians to use small objects on a tabletop, such as wooden blocks, glass bottles and ceramic plates to create the rhythm.

The band will also perform songs from Amid the Noise, its first original album.

Sliwinski said the process of composing their own works begins with discovering sounds on ordinary objects or new instruments. He described the style of the ensemble as energetic, rhythmic and engaging.

Just as engaging is Sō Percussion’s mission, which not only aims to create excellent music, according to Sliwinski, but also to participate in service.

As seen through a great deal of their instruments consisting of recycled materials, the group cares about helping the environment. They also demonstrate their care through paying for carbon offsets.

Carbon offsets, Sliwinski said, calculate how much of a carbon footprint people leave by taking airplane trips. A financial equivalent is then donated to invest in activities that try helping with environmental activism and legislation that will lead to a more carbon neutral world in the future.

“As a touring group, you can’t help but burn some gas along the way,” Sliwinski said. “But we are invested in paying it back.”