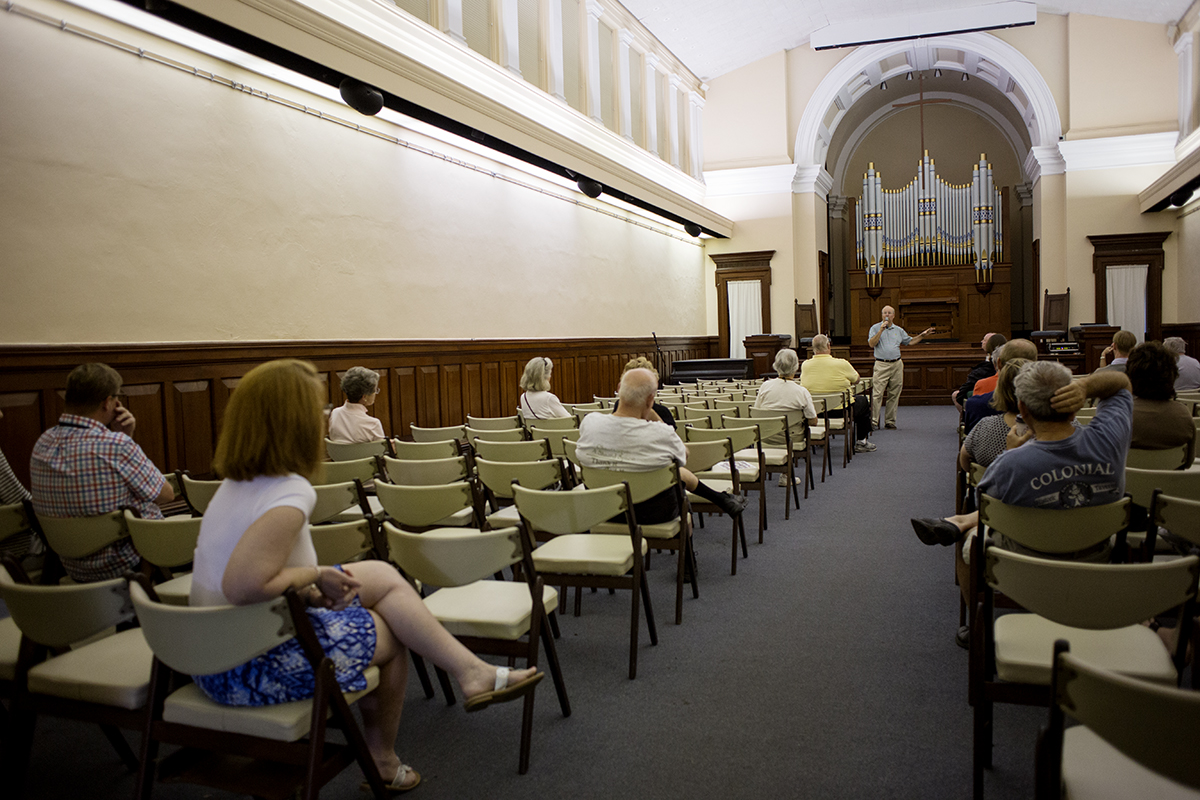 The second Chautauqua Institution Board of Trustees Open Forum was held Monday in the Hall of Christ. About 20 people, including board members, were in attendance throughout the meeting.

The meeting lasted about a half-hour before breaking out into smaller discussions between board members and Chautauquans, the same format as the previous open forum, which was July 12.

During the Q-and-A portion of the meeting, Chautauquan Jane Gross said the lack of reliable wireless connection throughout the grounds is concerning, and the board should be looking for donors to contribute to providing a Wi-Fi connection for the community.

The board, Institutionstaff and Chautauqua Property Owners Association are working on it, board Chair James A. Pardo Jr. said. The CPOA has in the past worked to create a season package with Time Warner Cable to benefit Chautauquans.

“To a large extent, it is a CPOA issue because it needs to come up through the community,” Pardo said. “They’re not going to have the solution to the problem but they can certainly have the input and be helpful to us. So, it is a priority. I can’t tell you when it’s going to be.”

CPOA President Bill Neches said he and board member Hugh Butler have been taking meetings with the Chautauqua Utility District and DFT Communications about the topic for the last couple years, but it is not determined who will pay for it and at what cost.

Pardo solicited and encouraged feedback about the timing of open forums. Previously, forums were held on Saturdays with CPOA meetings.

Pardo has also been hosting office hours at 4 p.m. Tuesday in the Film Room at the Main Gate Welcome Center. He said he has been considering doing fewer, alternating between office hours and sessions like board member Tim Renjilian’s Trustee Week Two presentation about programming.

Chautauquan Markie McCarthy asked if the board had received any feedback on speed bumps.

“The answer is yes, there has been feedback, and yes, like Chautauqua, you would imagine that feedback to be diverse,” Pardo said. “We’re on it. I personally think speed bumps are pretty good things when used in the right locations. I’m just not sold that this is necessarily the right location, although I understand that this is probably — at least from the police department’s view — the area where we have the greatest amount of more than 12 mph driving on the grounds.”

Chautauquan Rick Swegan asked what questions the board has been receiving throughout their meetings this year. Pardo said he has seen few questions regarding the Amphitheater project, and said he feels “fairly secure” about the progress and construction ahead, but doesn’t want to get ahead of himself. He said he has received several inquiries regarding the financial sustainability of the Institution as well as questions about the Chautauqua Symphony Orchestras contract negotiations. Pardo said a federal mediator and the parties involved in the negotiation were meeting Monday morning.

Rick Smith, a Chautauquan, asked if there was a long-term transit plan in place or being put in place. Pardo said from a priority standpoint at this time, projects such as the Amp, Athenaeum Hotel and figuring out a way to get monetary gifts for Bellinger Hall renovations from its current $5,000 pledge to $5 million are above transportation. But Pardo added he would most likely be off the board by time the next strategic plan is announced.