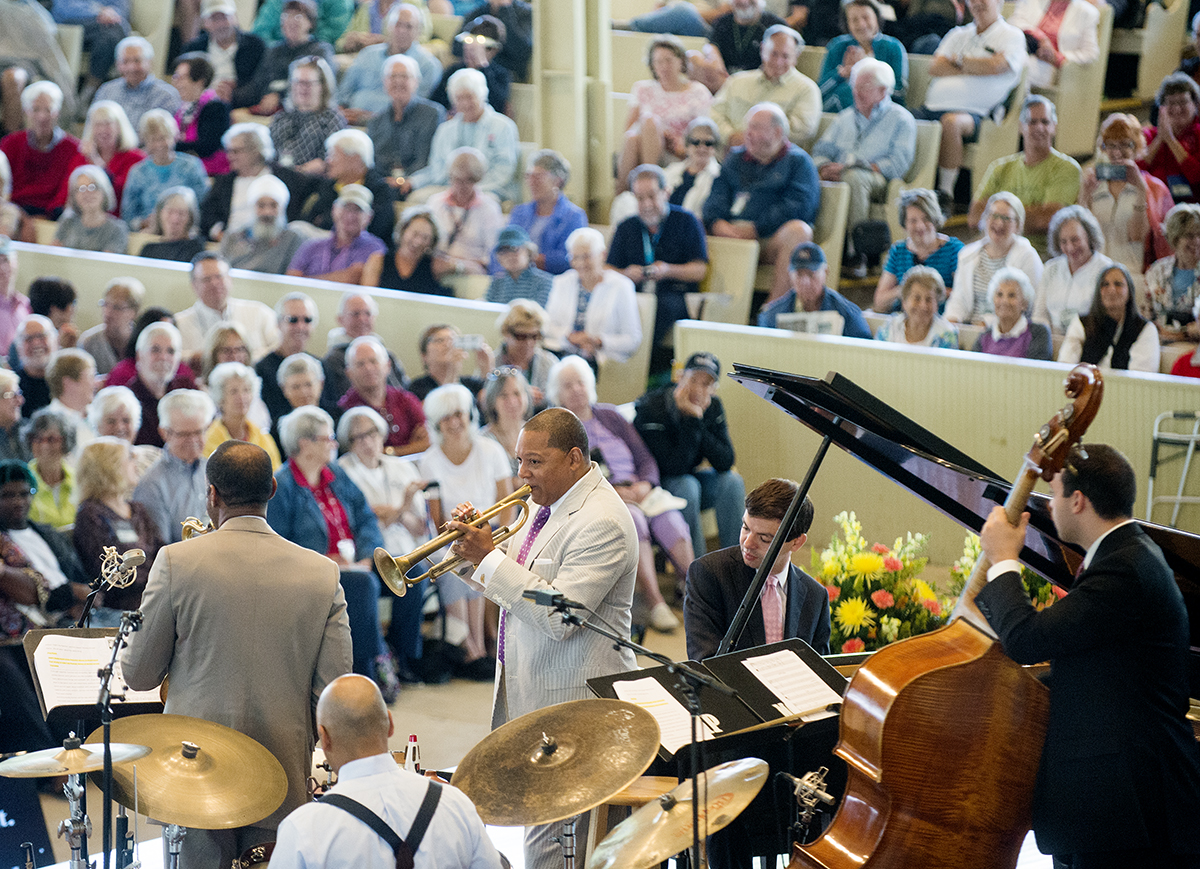 Since America’s founding in 1776, the arts have been representative of American culture. The tempo of music runs through the United States, connecting it in a way nothing else can, Wynton Marsalis said. A nation torn apart by politics and race and identity can be restored through the freedom the arts bring — a freedom that teaches the American people who they are.

Music filled the Amphitheater during the 10:45 a.m. August 23 morning lecture as Marsalis, accompanied by four other Jazz at Lincoln Center musicians, played key songs from American history including “Yankee Doodle” and “The Battle Hymn of the Republic.”

Marsalis, the artistic director of Jazz at Lincoln Center, discussed how the homegrown American arts allow individuals to see how they are connected through arts and tells them who they are.

“There are tales to be told. Tales of love and loss, of glory and shame, of profundity and even profound stupidity. Tales that deserve retelling, embellishing and, if need be, inventing from whole cloth,” Marsalis said. “This is our story. This is our song. If well-sung, it tells us exactly who we are and where we belong.”

Today, Marsalis said individuals hear about gun control, immigration, jobs, housing, finances, discrimination and corruption on a daily basis. The list of turmoil and political conflicts continue, and Marsalis said one thing that is never discussed is culture and the arts.

“We’re in the midst of a cultural bubonic plague,” Marsalis said. “In the last 50 years, we’ve looked everywhere to correct the decline in the quality of our national life — except the most obvious place: the arts as representative of our culture.”

According to Marsalis, leaders and politicians can learn from the history of America’s culture, which provides a “time-tested blueprint” on how to face an ever-changing world. Culture and the arts provide the sector needed to improve the nation’s financial and political systems, which Marsalis said will “lead us upward to intelligent and heroic democratic action.”

American culture began with the drafting of the Constitution and the Bill of Rights, which answered a question Marsalis said is important to culture: “How can I be me without keeping you from being you?”

The Constitution was designed to be flexible by allowing it to be changed through amendments. It brought together people who, despite their diverse background, all have a common desire for freedom.

Marsalis said James Madison, John Adams and Thomas Jefferson taught society how to negotiate differences. He compared this to the way a dance band adjusts to find the right tempo for different groups of people.

“To be effective, our Founding Fathers had to create a living document that could find the right tempo across the ages,” Marsalis said. “It was the Constitution that told us how to be, but it was left to the American arts to tell us who to be.”

A cultural engine runs the United States through the homegrown arts that developed in the country over the past 200 years, which has shaped society and government.

Famous jazz musicians such as Dizzy Gillespie, Charlie Parker and Thelonious Monk gathered in Minton’s Playhouse, a jazz club that fostered the birth of bebop jazz. Marsalis said those individuals demonstrated “who a person is is more definitive than what a person is.”

Jazz created a community of people who followed the same American objectives detailed by Jefferson, Adams and Madison more than 150 years prior to the creation of jazz music.

“Somewhere along the way, [jazz musicians] answered questions about individual freedoms and collective responsibilities in the language of swing,” he said. “The urgency and speed of their music was also a declaration of independence. ‘It exclaimed, ‘Now is the time.’ ”

Besides jazz music, Marsalis briefly touched on the literary arts. He said Edgar Allen Poe was writing the blues long before the blues was born, and Harriet Beecher Stowe wrote about the lives of slaves in Uncle Tom’s Cabin as a prelude to the civil rights movement.

Uncle Tom’s Cabin made people aware of the lives slaves led and how they are human, too, despite what plantation owners and citizens wanted to believe at the time. Marsalis said American arts speak a distinct truth that breaks down barriers across class, race and gender.

Marsalis began to sing “Joshua Fought the Battle of Jericho,” and a low hum spread across the audience as Chautauquans sang along quietly. He said the act of joining in showed music stretches across times.

“These songs brought people together because singing gives a community purpose,” Marsalis said. “That music made us believe and it called us home. People were in chains in the land of freedom, but they would soon be free.”

During the Civil War, the Confederates marched to the song “Dixie,” which was written in 4/4 time, and the Union Army marched to “The Battle Hymn of the Republic,” which is in 6/8 time. Marsalis and his quartet of musicians demonstrated the clash of the two time signatures, and how easy it could have been for the Union Army to switch time signatures.

As they played “The Battle Hymn of the Republic,” the song shifted into Sousa’s “The Washington Post March” to “Didn’t He Ramble,” a New Orleans parade anthem, to the Mickey Mouse theme song as they switched from 6/8 time to 4/4.

Marsalis said there used to be a stigma that European arts were cultured while American culture was unsophisticated. During the British Invasion in the 1960s, Marsalis said, Britons were singing “watered-down blues.”

“All of this music had a common source as it continues to have: the American experience. Nobody remembered that American music was integrated long before baseball,” Marsalis said. “Nobody remembers that a two-beat groove is the same in all forms of American music — bluegrass, country, folk, gospel, it doesn’t matter what you call it.”

The American arts provide human meaning to the questions of the Founding Fathers, Marsalis said. He believed they told people how to be themselves and to love what made them distinct individuals. Swing and art, like the works of Walt Whitman, Mark Twain and Duke Ellington, taught people how to balance their individuality with the desires of the group. Marsalis spoke to this meaning throughout his presentation, tying back to his remarks at the beginning of the lecture: “Before we sang, we spoke,” Marsalis said. “Before we danced, we walked. Before we wrote, we told stories, and before we told stories, we lived. Those songs, dances [and] writing allow us to speak to one another across generations. They gave us an understanding of our commonality long before the DNA told us that we are all part of each other in a glorious procession.”