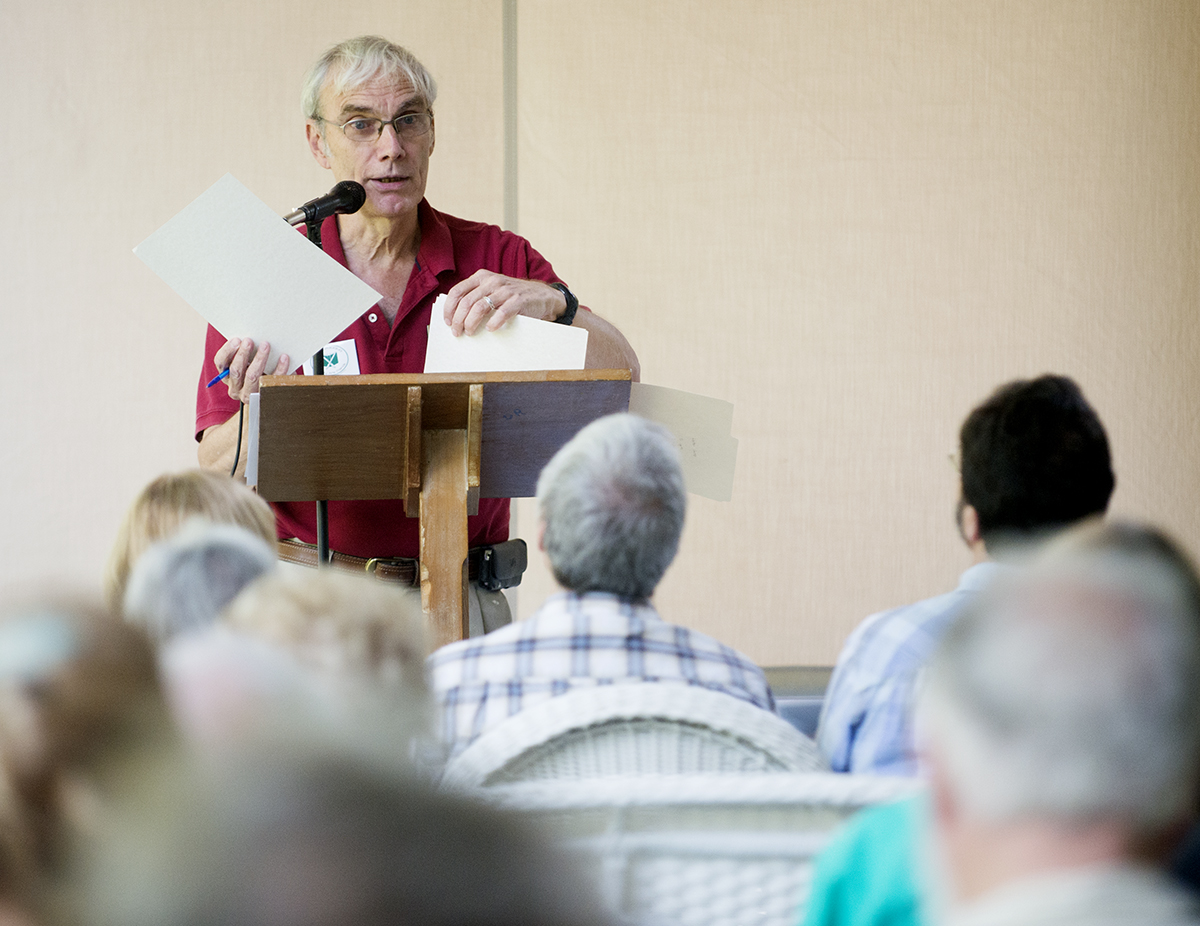 Winners of the annual writing contests, sponsored by the Chautauqua Literary Arts Friends, were announced Sunday on the porch of the Literary Arts Center at Alumni Hall.

Fred Zirm, president of the Friends and interim program director of the Chautauqua Writers’ Center, announced the young adult and adult winners in both the prose and poetry categories, reading aloud written remarks from contest judges.

In his written remarks, Hilles quoted William Carlos Williams: “It is difficult to get the news from poetry; yet every day men [and women] die for lack of what is found there.”

“More than any other entry, ‘Meditation,’ for me, came closest to rising to this august calling: Its difficulty, akin to Dame Emily Dickinson’s, say, the more I work with it, the more its enchanting music-making argument put me in contact with nutrients I hardly even knew I needed until I felt inoculated by them,” Zirm read from Hilles’ remarks.

And now you are.”

“[It was a thing] that needed to come out, and so did,” said Ellentuck, who lives in New York City. “It [was written] toward the end of college, through questions of identity and transition.”

Second place was awarded to Christopher Nye for his poem, “Zal.”

“My attraction to this poem began with its first syllable – the title, which the poet tells us is a Polish word ‘untranslatable’ but that is composed of ‘elements of nostalgia, regret, resignation, and anger,’ ” Hilles wrote. “The mesmerizing quality of this deeply stirring poem — the power of its rich sonic and ideational tapestry/ies — comes from the poet’s taking so many cues from music. … At its best, this poem reminds us by enacting its own stirring assertion, that: ‘more than any instrument/the human voice changes the tempo of my blood.’ ”

In the poetry category for young adults, an honorable mention went to Zoe Magley for “They Will Tell You.” Second place went to Amit Ariely for “Injustice” and Eleanor Tucker won first place for “Dear Lauren.”

In the prose category for young adults, Sophie Tucker was awarded second place for her work “Imagine.” First place went to Caroline Digel for “Blind Date.” Digel also received an honorable mention in the young adult poetry category for “Empowerment.”

In the prose category for adults, honorable mentions went to Joan Polishook for “Madeline” and Mara Wolf for “Lessons in Diversity.” Third was awarded to Betty Eggert for “Bella America, Bella Italia.” Carol Newman won second for “Epiphany.”

“ ‘Epiphany’ tells the story of a lifetime in just two pages, using a house as a portal into memories,” Hood wrote. “It ends on a note of hope, given to us in one strong image that resonates.”

The Charles McCorkle Hauser Prize in the adult prose category went to Bethany Snyder for “At Ease.”

“ ‘At Ease’ is a poignant story about how one day can change so many lives forever,” Zirm read from Hood’s remarks. “It evokes memories using stunning, vivid details that recognize how something seemingly small looms large in our minds.”

The Evolution of Camp-meeting Hymnody