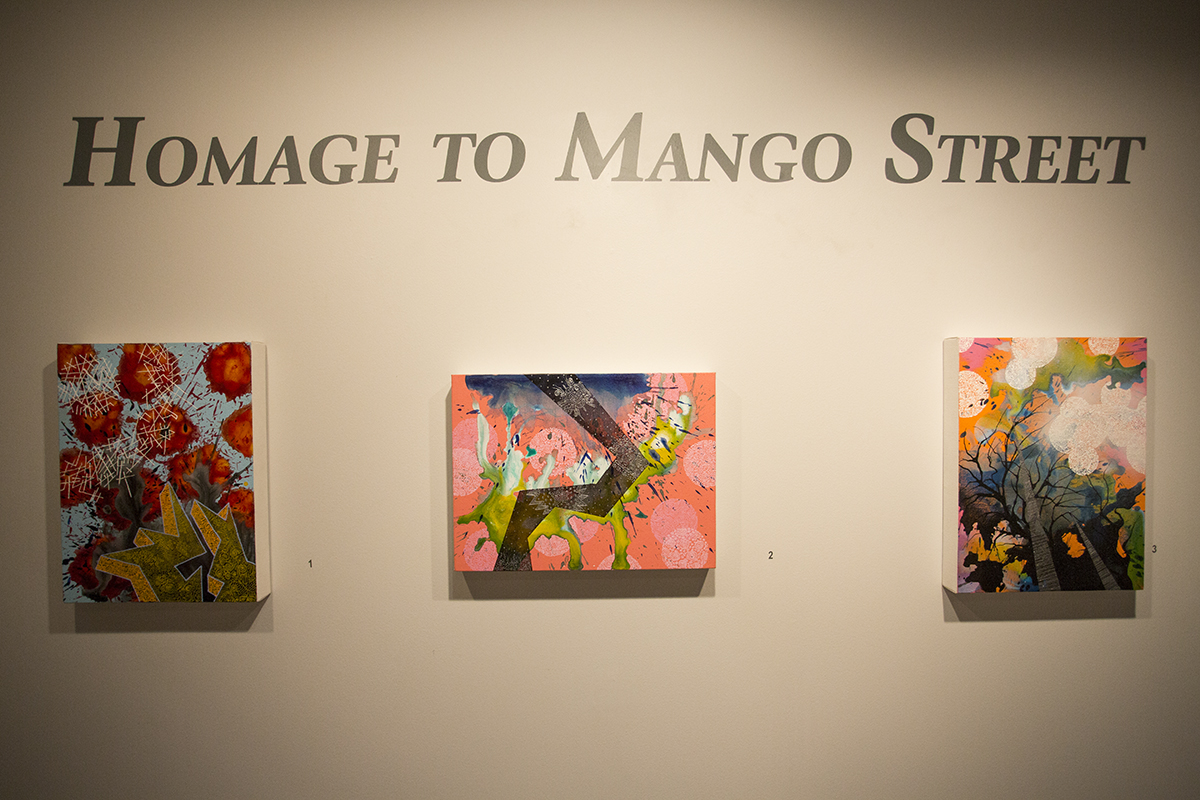 From left, “Particles Rising,” “Chain Reaction,” and “Mist” are part of “Homage to Mango Street.” This exhibition presents works by contemporary Latino artists and it opens at the Strohl Art Center on Sunday, June 25, 2017 through Monday, August 21, 2017. CAM BUKER/STAFF PHOTOGRAPHER

Art lovers interested in the process of organizing an exhibition can satisfy their curiosity at Tuesday’s Visual Arts at Chautauqua Institution lecture, which will feature the curators of the show “Homage to Mango Street.”

The curators, VACI Artistic Director Don Kimes and Denise Bibro, the director of Denise Bibro Fine Art in Chelsea, will speak at 7 p.m. Tuesday in the Hultquist Center about what makes the exhibition so timely.

“The way the country feels so divided right now, I think it’s — it’s sad,” Kimes said. “And so this is my little effort at building a bridge.”

“America is a very multicultural, diverse, rich place that has artists with all sorts of ideas,” Kimes said.

Since before the 2016 presidential election, Kimes had been thinking about the “walling off” of immigrants and their descendants during a time when immigration to the United States is a controversial issue, and attitudes toward Latinos often hostile. The show in Strohl Art Center will have its opening reception at 3 p.m. Wednesday and will run through Aug. 21 in order to overlap with a visit from Sandra Cisneros, a MacArthur Fellow and the author of The House on Mango Street. Cisneros will present her book, the story of a Latina teenager growing up in Chicago, on July 20 for the Chautauqua Literary and Scientific Circle.

Most of the VACI lecture will focus on the show, but Kimes expects that students in VACI’s School of Art will have questions for Bibro about professional art practices, like the process of getting artwork displayed in galleries.

Bibro thought the show itself would be instructive for art students.

“For young people who are trying to find their way through the arts, it’s very valuable to have all these influences,” said Bibro, who has been involved with VACI for about six years and in the past has juried VACI’s annual contemporary show and spoken in the VACI Lecture Series.

She said the lecture could also help those with less experience with the visual arts appreciate what they see.

“Sometimes I know audiences get a little intimidated by art because they feel they should know what it means,” she said.

Attending the talk, she said, could help people relax and open up to “experiencing the art just for what it is.”

“Ultimately we just want to go through this work because this work is beautiful,” Kimes said.