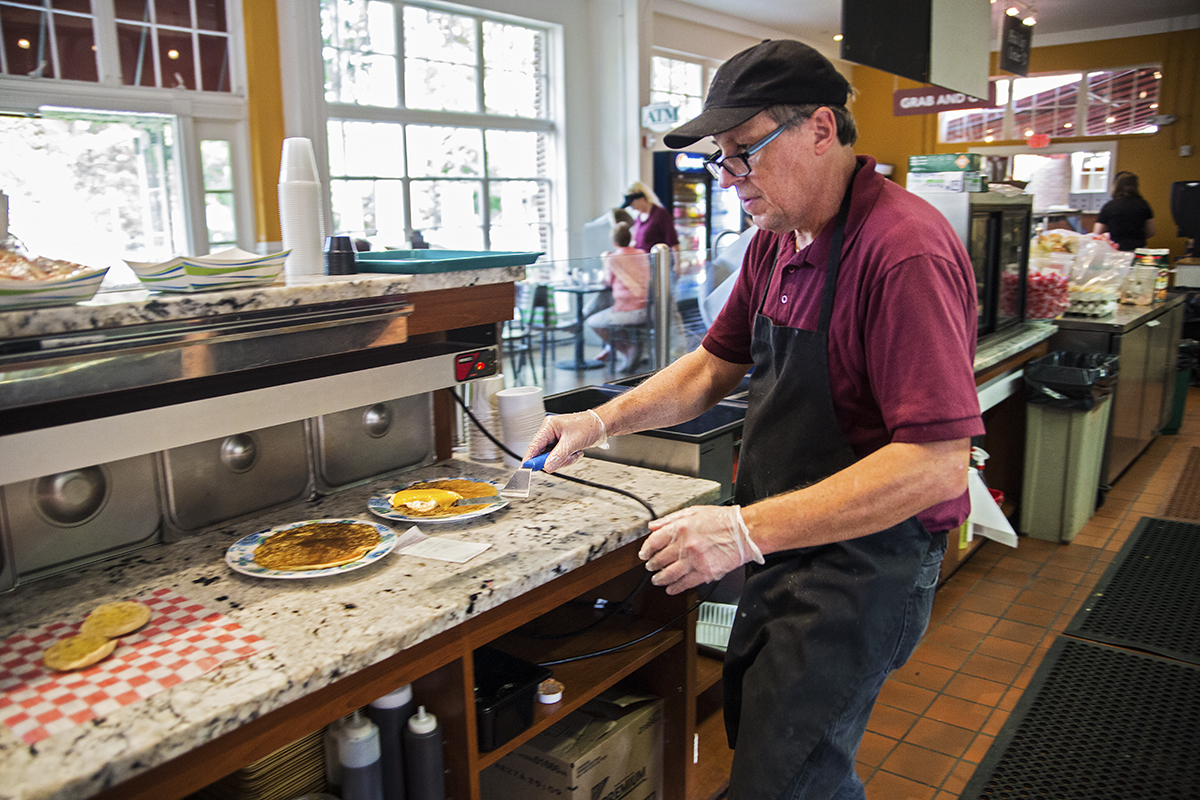 If posts on the Chautauqua Grapevine are any indication, Chautauquans are deeply disappointed by the “For Sale” sign in front of what used to be a local staple, the Tasty Acre Diner on Route 394 just outside the Main Gate.

Well, if you haven’t heard the news, you can relax. Tasty Acre owner and chef Paul Smith, server extraordinaire Donna Knopsnider and the Tasty Acre menu have migrated to a location even more convenient for most Chautauquans. Smith is now offering the same hospitality and quality eats at the Institution’s Brick Walk Cafe.

Smith, Knopsnider (not many knew her last name) and the full menu are available seven days a week from 7 to 10 a.m. in the cafe on Bestor Plaza.

The Brick Walk Cafe was not a major breakfast option prior to this season. The Gazebo there offered Starbucks coffee and some breakfast sandwiches, but if you wanted a full breakfast, well, the Tasty Acre was always an option. Now a full sit-down breakfast is available in the cafe.

“I decided to close the diner in February 2017,” Smith said. “The business model just wasn’t working, with being closed six months a year. I kept the utilities going to protect the building, just like Chautauquans do. And I was doing an awful lot of the work myself. I did the cooking, cleaning and all the paperwork except the taxes. When the diner was open, I was working seven days a week, often from 4 a.m. to do the baking until 8 p.m. when the last of the paperwork was finished. I didn’t want to keep up that schedule.”

At the Brick Walk Cafe, Smith opens the kitchen at 3 a.m. and has the place to himself for nearly two hours. He can make his cinnamon roll dough and other essentials and get them in the oven. By around 11 a.m., he has finished the clean-up and can enjoy the rest of the day.

Athenaeum Hotel General Manager Bruce Stanton and Director of Food and Beverage Services Paul Sass were pleased to add Smith and breakfast to the cafe.

“We consider ourselves lucky that Paul Smith was available and interested in joining us,” Stanton said.

Sass said one of the challenges in his first year on the job was to expand the meal options for Chautauquans and visitors.

“Adding Paul Smith is a great way to start,” he said.

Smith looks back at his 13 years at Tasty Acre with fondness.

“I had so many regular customers,” he said. “There were some people whose names I didn’t even know, but when they came in I just got busy with their regular order. Donna or someone would come in with the ticket, and I had most of their meal prepared already.”

It was like a big family, Smith said. But now, he estimates only about 30 percent of the Tasty Acre customers have discovered them at the Brick Walk Cafe.

“Cinnamon rolls and coffee cake, banana bread and handmade pies with fresh fruit were our best sellers,” he said. “And we always got a lot of orders for our one-eyed jacks. People liked the fact that we always served real local maple syrup with our pancakes and French toast. It’s all back here on the menu at the cafe.”

Smith said he was working at Peek’n Peak Resort last winter when Stanton, having heard about the closing of Tasty Acre, called to see how Smith was doing. If Smith were interested, Stanton said, there might be an opportunity at the Institution for him. Two weeks later, Smith decided he was interested, and here he is.

Smith said his tenure as Tasty Acre’s owner was hardly the longest for the restaurants in that building. When the restaurant first opened outside the Main Gate in 1946, the first owner sold after three years. But the next two owners ran the place for more than 25 years each. It’s anyone’s guess what will now happen to the building, but the location is still good.