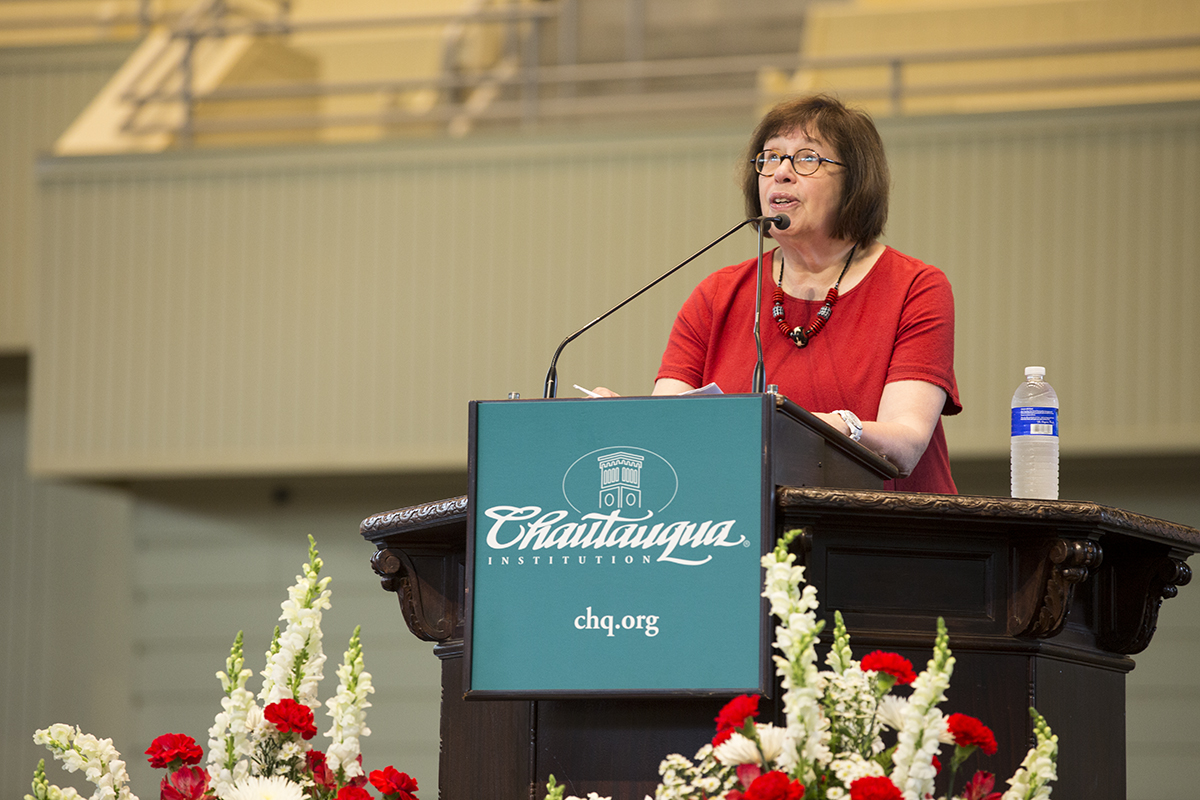 Linda Greenhouse might say some controversial things, but the title of her Monday morning Amphitheater lecture — “The Supreme Court In Troubled Times” — is not one of them.

“We are indeed in troubled times,” Greenhouse said. “But that itself is not so new.”

The Knight Distinguished Journalist in Residence at Yale Law School and a former Supreme Court reporter for The New York Times, Greenhouse opened Week Five’s theme “The Supreme Court: At a Tipping Point?” with that disclaimer.

Then, diving into a story of Guantanamo Bay prisoners and America’s post-9/11 political climate, she made good on her promise to wade into troubled waters.

“(Circa fall 2003) the makeshift prison at the U.S. Navy base at Guantanamo Bay, Cuba, was filling up as fast as the military could build cells to hold … (men) described by Donald Rumsfeld, the Secretary of Defense, as ‘the worst of the worst,’ ” Greenhouse said. “Housed on foreign soil, cut off from any kind of legal process, far from the reach of federal courts, regarded as unprivileged belligerents who were unprotected by prisoner-of-war status under the Geneva Conventions; these were the inhabitants of the legal black hole the Bush administration had established.”

With Guantanamo’s extrajudicial legal status rooted in World War II-era precedent, few people expected the Supreme Court to get involved; that was left to civil liberties lawyers working at the district court level.

But then Chief Justice William Rehnquist surprised the skeptics.

“The Supreme Court … agreed to hear the detainees’ appeal,” Greenhouse said. “The case was Rasul v. Bush. The court found that Guantanamo … was functionally part of U.S. territory, and that federal courts had jurisdiction over it through the habeas corpus statute.”

The court took up the Rasul case not only for the importance of its content with regard to rule of law and the separation of powers, but also for the symbolic significance it held, she added.

“I suspect that many of the justices, perhaps most, didn’t know how they would rule,” Greenhouse said. “But what they did know was that the ruling had to come from the Supreme Court; that whatever the answers to the profound questions at the heart of that case, the answers lay in law, and the Supreme Court was called … to deliver them.”

The Guantanamo petition was accompanied by an amicus curiae brief from Fred Korematsu, the eponymous petitioner in the 1944 Korematsu v. United States ruling that upheld America’s Japanese internment program as constitutional, Greenhouse said.

Sixty years later, Greenhouse said, Korematsu’s amicus brief was meant to send the justices a simple message: “You made a mistake in my case … and I’m begging you, don’t make that mistake again.”

“Fred Korematsu died in 2005,” Greenhouse said, “a year after the court vindicated him.”

This legal saga, of prisoners held outside the Constitution and a Supreme Court that took action to bring them back under its protection, exemplifies the central crisis at the heart of Greenhouse’s address.

“My question is this: What do we have the right to expect from our Supreme Court?” Greenhouse asked.

Her short answer? “Something very much like the Guantanamo decision.”

“The public could not have concluded that the Supreme Court was in the hands of any one party or any one president,” Greenhouse said. “Clearly the justices were not functioning as politicians in robes.”

In working to maintain the rule of law, she added, there are certain functions the Supreme Court must fulfill: explaining decisions in understandable terms; acting within the bounds of social precedent without perpetuating unfair systems; and treating the Constitution as what Justice Anthony Kennedy called a “covenant with the future.”

I suspect that many of the justices, perhaps most, didn’t know how they would rule,” Linda Greenhouse said. “But what they did know was that the ruling had to come from the Supreme Court; that whatever the answers to the profound questions at the heart of that case, the answers lay in law, and the Supreme Court was called … to deliver them.”

That last one stands in contrast to the legal theory of originalism, which interprets the Constitution in the historical context of its 18th-century creation.

“(This is) what Justice (Clarence) Thomas would call ‘first principles,’ while many of us, the rest of us, might call it simply ‘going backward,’ ” Greenhouse said.

So, too, do people have a right to expect from the court a dedication to democracy and coherence between the “basic commitments” of the justices and those of the larger populace.

This sort of integrity is so important because of the reverence with which the Supreme Court, as an institution, is regarded.

As evidence, Greenhouse pointed to a sociological experiment wherein subjects were shown the results of the Hazelwood School District v. Kuhlmeier ruling, with some told it was made by the court and others told it was made by a local school board. Those who attributed the decision to the court supported it far more than those who thought the same policy came from the school board.

“This legitimation function, as the social scientists call it, has been one of the court’s great strengths,” Greenhouse said.

Threatening this respectability, however, is public perception of the Supreme Court as being politically motivated. For instance, Chief Justice John Roberts’ upholding of the Affordable Care Act was perhaps “not to save Obamacare from its enemies, but to save the Supreme Court from its friends.”

“I think the court today is in a moment of real institutional peril … (because) what is historically unusual is how precisely the ideological polarization maps onto the party identification of the president who appointed each justice,” Greenhouse said.

Historically, presidents have appointed various justices who significantly diverged from them ideologically. Further, there tended to be several moderate justices on the bench at any time, which starkly contrasts with the current situation, which finds four justices on either side with Kennedy alone in the middle.

Though this isn’t a “legitimacy crisis,” at least not yet, there are “trend lines and warning signs.”

How, then, can legitimacy be maintained?

Pointing to legal scholar Richard Fallon’s distinction between legal legitimacy and sociological legitimacy, Greenhouse noted that the latter can be degraded even if the former is maintained.

“I think it’s possible to describe Citizens United (v. FEC) as a decision that possessed legal legitimacy … but where (it) failed was in the court’s obtuseness to the real-world consequences of unleashing unlimited corporate money into politics,” Greenhouse said. Which is to say, “Citizens United was a failure of sociological legitimacy.”

Implicit in that dichotomy is the recurring question of court politicization.

“I think the conservative justices who control the court today have been reckless when they need to be wary,” Greenhouse said. “They have to control their appetite for pushing change.”

That such an appetite exists is not a question for her. More important is how the right-wing political agenda, from abortion to school prayer to affirmative action, have thus far “remained elusive” despite more than three-quarters of appointments since the end of the Warren Court having been made by Republican presidents.

With Justice Neil Gorsuch on the rise and Kennedy rumored to be leaving the bench soon, that “grand project” may finally be within reach.

“The question (is) how eagerly to reach for it,” Greenhouse said.

Case in point: the “highjacking of the First Amendment as a tool of deregulation” with regard to right-to-work policies that neuter the “agency fees” used by unions to fund collective bargaining.

The Supreme Court was poised to rule on this issue, overturning the lower court’s decision and supporting right-to-work legislation, when Justice Antonin Scalia died. Without him, the court tied 4-4, therefore deferring to precedent and protecting the agency fees.

I think the court today is in a moment of real institutional peril … (because) what is historically unusual is how precisely the ideological polarization maps onto the party identification of the president who appointed each justice,” Greenhouse said.

There is now another right-to-work case set to be ruled on, and with the right-leaning Gorsuch now on the bench, “the eventual outcome … is not in doubt.”

“(This case) well illustrates the danger the court faces if it’s perceived as giving itself over to the particular political agenda,” Greenhouse said. And with states actively writing right-to-work policies into law, “a legislative route is available to accomplish this goal.”

The question, then, remains: What can Americans reasonably expect from the Supreme Court?

To answer, Greenhouse ended where she began: the legal fallout of Sept. 11, 2001.

The court heard a case last month, Ziglar v. Abbasi, concerning undocumented, mostly Arab immigrants detained in the wake of 9/11 despite no demonstrated affiliation with terrorism. Some of the detainees sought damages from the Department of Justice for violations of their constitutional rights, but the court’s majority decision rejected their claims.

“Never before had federal law enforcement agents rounded up hundreds of men based on their ethnicity and held them without charge for significant periods of time,” Greenhouse said. “It was, by definition, a new context.”

Yet the court deferred to precedent all the same, and rejected the claims to damages.

“So what should we expect from the Supreme Court?” Greenhouse asked. “Better, I would argue, than we got in this revelatory case.”

Though the Supreme Court has always existed “In Troubled Times” in some sense, she noted that it will be “tested severely” in the weeks and months ahead.

“I hope in future years … Abassi, the plaintiff in the Ziglar case, will not have the occasion to file a brief warning the court, as Fred Korematsu did, against making another historic error,” Greenhouse said. “But if that should come to pass, and Mr. Abassi does seek to send such a message to the justices, I hope we have, at that time, a Supreme Court that will listen.”