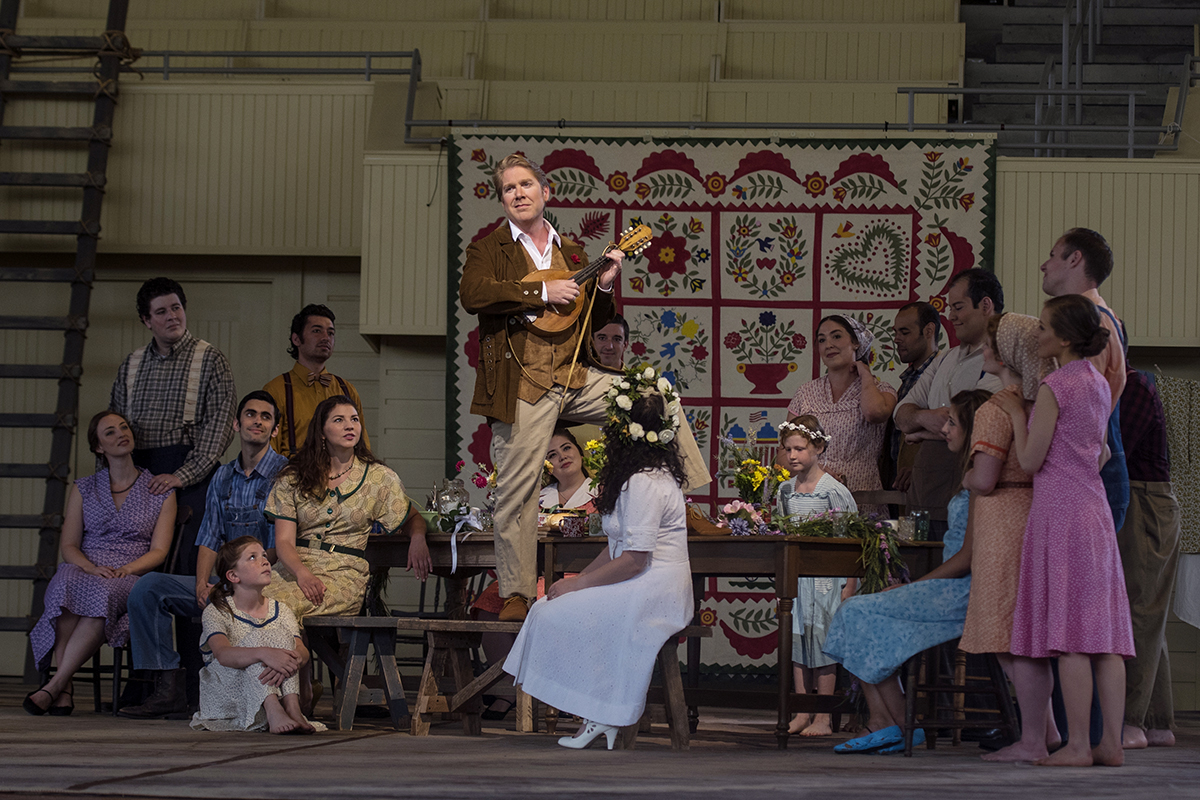 Daniel Belcher performs as Orpheus in the Amp on Thursday, July 6. L'Orfeo is a baroque opera by Claudio Monteverdi, based on the Greek legend of Orpheus. L'Orfeo will take place Saturday, July 8, in the Amp. OLIVIA SUN/STAFF PHOTOGRAPHER

The only thing that’s changed is everything.

At 8:15 p.m. Saturday in the Amphitheater, the Chautauqua Opera Company will present the U.S. stage premiere of Ottorino Respighi’s realization of Claudio Monteverdi’s seminal opera, L’Orfeo.

Belcher, who will play the role of Orfeo, was shocked when Chautauqua Opera’s General and Artistic Director Steven Osgood first sent him the opera’s score. He describes Respighi’s orchestration as “wild and big,” a “grand opera” that’s a departure from Monteverdi’s original 1607 Baroque score.

“Everything I thought I knew about it, I had to put on a mental shelf,” Belcher said.

He first played Monteverdi’s Orfeo in 1999, so having to start from scratch with a role he has lived with for such a long time has been both uncomfortable and exciting.

“At times (during rehearsal) I’ll feel like ‘There you are, old friend. I see you,’ ” Belcher said. “But most of the time, it feels like a completely new piece.”

“It’s interesting because we not only have the history of Monteverdi, but we also have the lens that Respighi put on top of it,” Stickann said.

Staging a show that has never been seen in the United States means there was no template for Stickann to follow, no institutional memory of how it should look. That blank canvas, along with Respighi’s lens on top of Monteverdi, allowed her to approach her directing with unfettered, unclouded eyes.

“Quite honestly, if (the performers) were in togas, I wouldn’t tell the tale any differently,” Stickann said. “The great thing about Greek myths, about Orpheus in particular, is they can be told at any time. We’re still telling this story. It’s about all of these themes — love, loss, faith — that we continue to struggle with on a daily basis.”

Stickann also saw her staging as a chance to bring a new character into the opera: the Amp itself. After spending time with the richness of Respighi’s score and learning the Amp was being rebuilt, she thought it only right to christen the space appropriately.

To do this, she has staged a production that utilizes the choir loft, the upper levels and the audience seating, in addition to the stage proper. Stickann has essentially turned the entire Amp into the stage. While it hasn’t been free from challenges, her decision actually received an assist from Respighi himself.

With his orchestration, Respighi has created a lot of space. Stickann describes the arrangement as “staid and slow … drawn out like taffy.” This means Stickann had to figure out a way to fill that space, to keep the emotional height of the storytelling ever present even as it’s being stretched over a longer period of time. As it happens, the massive scale of the Amp works in perfect concert with Respighi’s score.

“Using the vastness of the space in (those) moments when we have a vastness of musical expression has been a nice marriage,” Stickann said.

Mezzo-soprano Heather Johnson, who will play the parts of La Speranza, La Musica, and La Messaggera, believes that marriage has resulted in an opera production that is unlike anything those in attendance will have seen before. That includes those in the know.

Much like the building where it will be staged, the opera is exactly the same as it was before. The only thing that’s changed is everything.