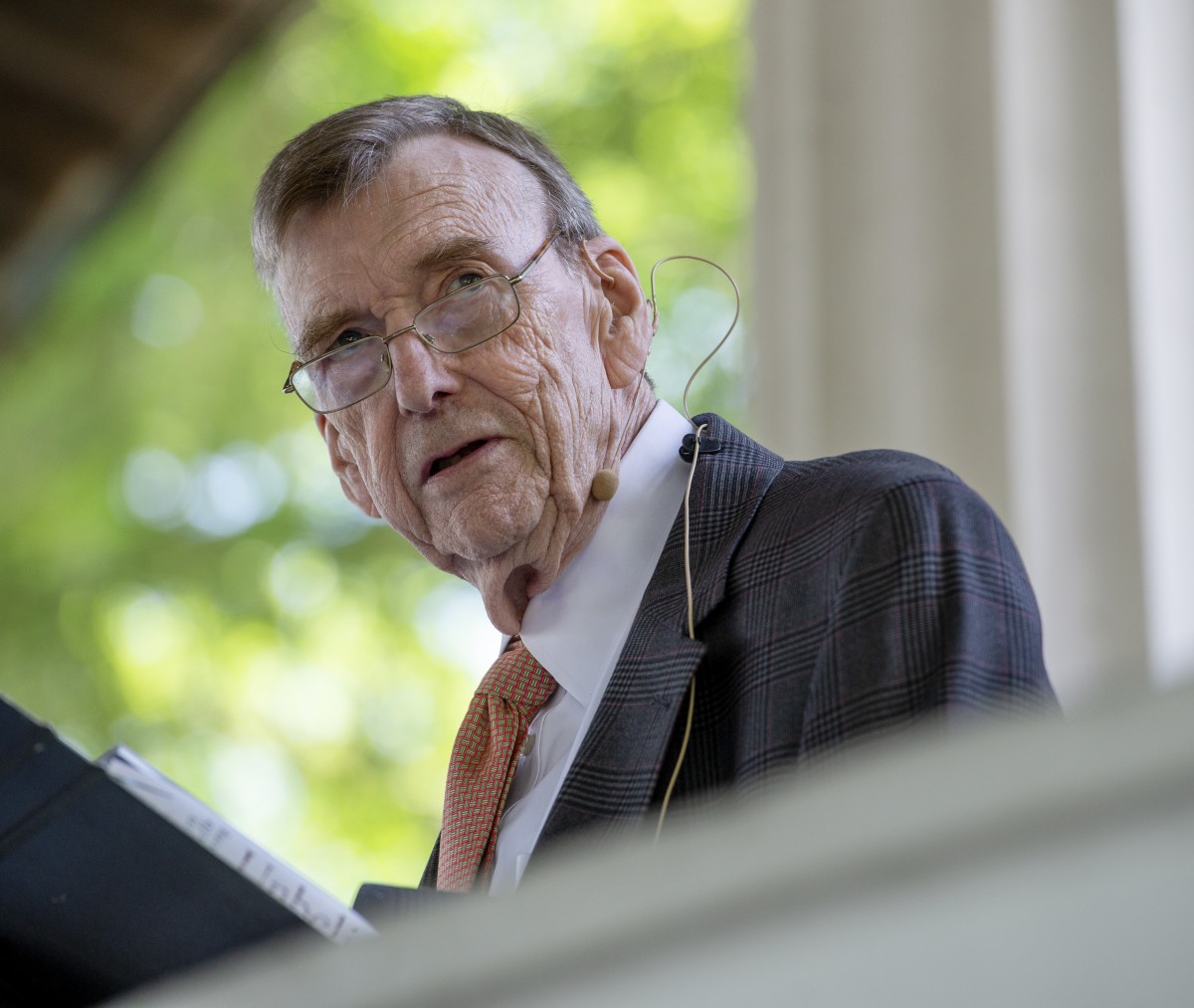 What do Charles Darwin and sex have in common?

John Shelby Spong’s answer is simple: nothing. Nothing other than the vast amount of time the Christian Church spends engrossed in these two subjects.

On Tuesday in the Hall of Philosophy, Spong explained how Darwinian and Christian values came to divide the Christian faith in his lecture titled, “The Assault of Charles Darwin and Why the Christian Church Retreated before Darwin.” Spong continued Week One’s interfaith theme, “Producing a Living Faith Today?”

To contextualize his argument, Spong began with a look back at topics that have seized space in newspapers for the past 1,500 years. Those included abortion, birth control, marriage, divorce and homosexuality, all concepts Spong said have a track record of “turning the church on.”

Spong spent a lot of time in the beginning of his career arguing that women can be priests. The opposition he heard shocked him. He was told women were not capable of being priests, were not created to be priests and could not represent the image of God.

Spong put forth a hypothetical experiment: Place a man and a woman in front of the podium and take away every biological similarity. There’s only one thing left, Spong said.

“You get down to that single organ that is supposed to distinguish men from women, and you say, ‘There’s where the image of God is?’ ” Spong said. “Truth does not lie at the end of majority expression. Truth challenges it.”

Truth challenged the differing stances on homosexuality, too. The church believed it to be an act of evil, using a verse from Leviticus that reads, “Thou shalt not lie with mankind, as with womankind: it is abomination,” to support the claim that the act was unnatural.

Spong believes an argument can be made only if homosexuality is in fact a personal choice, but science has already disproven that.

“There is not a scientist in the world who thinks that people choose their sexual orientation,” he said. “We cannot blindly follow tradition when everything we know … tells us that it is not so.”

One of the scientists who pushed the status quo was Charles Darwin, who Spong called the second “obsession of the church.”

Darwin began his work in 1831 when he got a job as a naturalist on a five-year survey voyage around the world on the HMS Beagle. It took him 25 years after the trip, but Darwin claimed his place in history when he released the Origin of Species.

The book sold out immediately and raised questions that had previously been debated, but were never analyzed from a perspective like Darwin’s. Christians did not welcome these findings with open arms, Spong said.

In an attempt to set the record straight, a debate took place in 1860 between Thomas Huxley, a biologist and an avid defender of Darwin’s, and Samuel Wilberforce, the bishop of Oxford and an advocate of biblical literalism. Wilberforce resorted to ridicule and at one point asked Huxley which side of his family was descended from apes. Wilberforce won the debate, but Spong said it was not enough to earn him a lasting legacy.

“Sam Wilberforce was hailed as a hero, but what’s interesting is that heroes don’t last forever,” he said. “He was very popular in his lifetime, but his reputation has faded.”

After the debate, Darwin’s theories made their way into the bloodstream of western civilization. At first, evolution was taught in small, private settings, but as it began to gain momentum in 1910, the Christian Church decided to tackle the issue head on.

A group of Presbyterian divines proposed a series of pamphlets on the fundamentals of the Christian faith. Once the project received funding, more than 500,000 were sent out each week. As time went on, the pamphlets became more popular, and by the 1920s, every church in the world was divided over being classified as fundamental or modernist.

“You can’t force truth into popularity,” Spong said. “Darwin seemed to have the truth, and after a while, these fundamentals of the Christian faith did not seem fundamentalistic after all.”

The Presbyterian leaders published five fundamentals all Christians were required to believe in order to identify as Christian. Among them were the ideas that the Scriptures are the infallible word of God and human beings are created perfect but fell into sin. Spong said those fundamentals were too similar to the myths of the religion to survive.

“They were so absurd, no one in the academic world would give them credibility,” he said.

The problem facing modernists, on the other hand, was that they knew too much to be fundamentalists, but did not know how to be Christian, Spong said.

“That is reflected in the world today,” he said. “The major mainline Christian churches are all in a frantic of political decline. The fundamentalistic churches are strong, but they are also declining. The world is catching up, and fundamentalism is not a viable option any longer.”

The fall of these ideals caused a rise in Darwin’s ideals. At that time in history, there was no longer a medical school in the western world without a foundation built upon Darwinian principles, and hardly a science department in the United States that was not embracing evolution. That was until the public school system implemented “creation science,” Spong said, designed to be a fair alternative to Darwinism. Although creation science is not taught in public schools anymore, Spong reminded the audience it was not that long ago that former President George W. Bush endorsed it.

“Bush wanted people to be fair, to have a chance to voice an opinion,” Spong said. “He thought you could decide by majority vote what truth is. It doesn’t work that way.”

“By virtue of its own strength and integrity, Darwin became stronger and stronger,” Spong said. “There is hardly an educated person in the western world who does not accept Darwin’s point of view as truth.”

Spong asked why Christians fought so hard when they knew they were wrong. The answer, once again, was Darwin.

“There was something about Darwin that challenged not just the Christian story, but the way in which we told that story,” he said. “Darwin said there was ‘no perfect creation,’ but the church said we were ‘created perfect and then all fell into sin.’ You can’t fall into sin if you are not perfect to start with.”

Spong acknowledged how difficult it can be to accept the similarities humans have with the apes, but in a time where millennials check “none” for their chosen denomination more than the rest of the other options combined, he believes the dialogue has to continue between Darwinism and Christianity in order for the faith to survive.