Andrew Krivák mastered the anatomy of a story by listening to his grandmother around the kitchen stove. 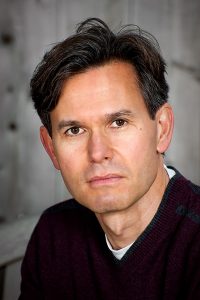 That, and a childhood of roaming, hiking, fishing, camping and fort-building fashioned Krivák’s imagination as a writer.

“When I was a kid, I used to wonder how it was I got to such a place, this rural town where I could do anything I wanted to out in the woods, and not be told I couldn’t,” Krivák said. “It wasn’t always great, but it shaped me, and it was all of America I knew for a long time.”

Krivák lived in the same house on the same street of the small town, Dallas, Pennsylvania, until he turned 18.

Those roots mirror those foraged in The Signal Flame, Krivák’s second novel and a 2018 Chautauqua Literary and Scientific Circle selection.

Krivák will discuss his work at 3:30 p.m. Thursday, June 28 in the Hall of Philosophy, as part of Week One: “The Life of the Written Word.” 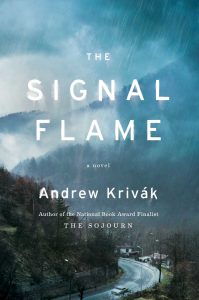 The Signal Flame is the only CLSC book Babcock chose before her retirement at the end of last summer. It was also a finalist for the 2018 Prize.

Krivák said being at Chautauqua for the inaugural Prize, among a community of “deeply committed readers and thinkers,” was an experience beyond his expectations.

“I don’t think anyone as a group has ever understood what I try to do in fiction as well as the people I’ve encountered at Chautauqua,” Krivák said. “So, I’m looking forward to talking to the same readers about another book from another time, one—I have to confess—I wrote with readers like them in mind.”

Set in the rural small town of Dardan, Pennsylvania, The Signal Flame braids the stories of three generations of the Vinich family: the patriarch, Jozef; his daughter, Hannah; and his grandson, Bo. The book takes place from Easter to Christmas, 1972, an interim in which Hannah and Bo mourn the loss of Jozef and sit uncomfortably in a place between waiting and grieving: Bo’s brother, Sam, is missing in action while serving in the Vietnam War.

During this trying time, the characters grapple with a long-standing feud now urgent for resolution. Past events have estranged the Vinich family from their neighbors, the Youngers. Now, Sam’s fiancee, Ruth Younger, is pregnant. Hannah and Bo must decide how to mend their frayed relationship with Ruth, despite the uncertainty of Sam’s future.

Throughout the book, the folks of Dardan experience the agonizing and the grievous.

The book’s timespan, from Easter to Christmas Eve, is an inversion, said Atom Atkinson, director of literary arts.

And this inverted structure “investigates” the Christian narrative.

In Catholicism, the period of time the book inverts is a season of waiting, according to Dave Griffith, vice president and Emily and Richard Smucker Chair for Education. Coupled with the uncertainty of Sam’s homecoming, Griffith said the book exemplifies the feeling of stagnancy, of staying at home, of waiting.

Yet in this stillness, comes a flood. A flood of hydraulic and metaphorical devastation.

“All around the characters is devastation, not just an ocean away (in Vietnam),” Griffith said. “This flooding … gives you a sense that what’s happening miles away is happening outside your window.”

But those moments of unforgettable tragedy reveal beautiful moments of human connection and endurance. The book embraces this delicate harmony of sorrow and joy, a harmony Krivák compares to the fragile balance of glassblowing. Intense heat is necessary to forge glass; there is a constant worry of breakage, but therein lies its beauty.

“For me, the craft of writing is about being able to shape and make clear those moments of beauty within the struggle. We are inheritors of loss but never loss without some redemption of it. If one lives fully, there is as much joy and beauty to that life as there is the inevitable moments of ‘the hard stuff’ we all have to face. You can’t seek one and avoid the other. You have to let both characters onto that stage.”

As in The Sojourn, the backdrop of The Signal Flame is the prickly decay of war.

“This is not actually something about which I’ve set out to write, but have, nevertheless, succeeded in doing with each novel,” Krivák said. “I think it’s because of the stories I heard as a boy about war.”

Both of Krivák’s grandfathers fought in World War I, one with the Austro-Hungarians and one with the Americans. His father was a veteran of World War II. And before the draft ended, Krivák’s older brothers “struggled with the question” of serving in the Vietnam War.

“When I was a nine-year-old boy in 1972, it seemed to me that every boy was raised by or around someone who served in a war, and that the boy would, too, become a man who went to war,” Krivák said. “It turns out, I’m not a warrior, but something about this generational theme has shaped my imagination, and I wonder if it’s not because I went from small town Pennsylvania to studying philosophy and literature as an undergraduate at St. John’s College, Annapolis.”

In the Iliad, the Greeks knew the struggle or the contest as the agon. When Krivák first read the Iliad, he realized the stories of struggle were not too different from stories he heard his grandmother telling about his grandfather’s experience during the first World War.

He realized the agon’s integral relationship to a compelling story.

“No drama or story will emerge without it,” Krivák said. “I encountered it first in the particular of stories around a kitchen stove, studied it next in the universal themes of the classics and now have tried to weave those particulars and universals of ‘struggle’ together into something resembling a novel.”

The agon Krivák understood through stories from his grandparents and Hellenic epics sparked a desire to leave his small town Pennsylvania; to leave his own Dardan.

“Ultimately, though, I had the itch to get out and see more of the world. I’ll blame that on the books I read, and my parents, who encouraged all of their kids to see as much of it as we could,” he said. “So, I took advantage of that support and never looked back. But I always knew, if I ever became a writer, I would write a Pennsylvania novel, set in 1972. And that became The Signal Flame.”

Through the unpredictability of war, of tragedy and of fate, The Signal Flame lives and breathes in this space between knowing and unknowing, Griffith said, even thriving on the raw unexpectedness of life. The novel’s ending is indicative of this dichotomy; Krivák said he believes, or at least hopes, that readers see the beauty amid the struggle.

The book’s illusory ending “is both a dream of what was and a hope for what may be,” Krivák said. “Bo is no seer, no mystic. He’s a good man who works hard and who knows how to get things done.”

In other words, he is human. And like all humans, Bo is unable to foresee his fate. According to Krivák, after war has taken its toll and after hearts have changed their minds, uncertainty still remains.

“Yet, in the course of the year, time has not stood still,” Krivák said. “And now, here it is, Christmas Eve, 1972, Bo is looking forward to what a New Year may bring, and in a moment of sleep — and exhaustion, really — he is caught in a still point of shame, uncertainty, and hope.”

Krivák offered an example of this hope in two characters central to the plot, Father Rovnávaha and the beloved Vinich family dog, Krasna. Krivák said that in Slovak, “Rovnávaha” means “the balance,” and “Krasna” means “beautiful.” Although not members of the Vinich or Younger families, the dog and priest advise, support, love and sustain the other characters. When Rovnávaha and Krasna are absent, their memory remains.

Through the agon, balance and beauty prevail — as permanent as glass.