Lisa Weiss was glad it rained in Chautauqua during Week Four.

It reminded her of the last time she was on the grounds — as a teenage piano prodigy studying at the School of Music. Almost every day, Weiss recalled, rain rolled in late in the afternoon, and she and her friends would run out into it barefoot.

“I always felt this constant state of being enriched (while at Chautauqua),” Weiss said. “Whether it was by music or by nature, or just the sense of independence.”

When she arrived on the grounds in the 1960s, Weiss had already played with the Boston Pops Orchestra as a piano soloist. She was 12 years old. For the first of four summers she would spend at Chautauqua, Weiss lived in a boarding house with minimal adult supervision.

Weiss and her friends — mostly piano students, but some singers and actors, too — frequented the Hall of Philosophy at night, where they would write and stage their own plays. One teenage piano student introduced her to 19th-century Russian literature, starting with Fyodor Dostoyevsky’s Crime and Punishment.

More importantly, the 16-year-old and one of his friends introduced Weiss to new music. In the mid- 1960s, the piano practice rooms weren’t soundproof, and according to Weiss, they weren’t locked, either.

“I think I learned as much from being around all these pianists as I did from the actual teacher,” Weiss said.

When she was 13 years old, someone pulled her aside in front of Norton Hall and asked her to be an extra in the final scene of Samson and Delilah. Weiss was ushered backstage, given a sari to wear and instructed to hold Delilah’s train, then fall to the ground and act as if she were dying with the rest of the extras.

While Weiss admitted she was “a little young for real romance” during her time on the grounds, she said she’s still always found the area “romantic.”

“The artist’s life is highly disciplined,” Weiss said. “It’s your duty to be ethical and to be very true to your art. Everybody was having fun here, but it was also very serious, and I learned how to be confident but humble.”

This season, Weiss returned to Chautauqua with her husband, artist Howie Lee Weiss, who taught classes at the School of Art during Weeks Three and Four.

One thing on the grounds Weiss didn’t explore until this summer was the Athenaeum Hotel. She would stand in front of it, debating whether to go inside, but never got past the front porch. As a young student, Weiss said, she found the building too intimidating.

Being younger than her peers, Weiss said that most students were welcoming and also challenged her.

“I began to raise my own bar. … When I first got here, I was probably a little conceited and that stopped very fast,” Weiss said.

One conversation with another piano student has stuck with Weiss. The student was older than her and complaining of stage fright when Weiss told her she had nothing to worry about. The student took Weiss’ well-intentioned comment as a snide one and asked her what did she know, since she was just a child prodigy?

“She really raked me over the coals,” Weiss said.

At the School of Music, Weiss didn’t feel superior to her peers.

“I felt surrounded by really talented, slightly older people who inspired me a lot,” Weiss said.

At Chautauqua, those people taught her “how to talk about music” in addition to playing it, Weiss said. She’s kept journals for most of her life, and in 2015, earned a master’s degree in creative writing from Lesley University.

Weiss sees a connection between her piano-playing and her writing and likened musical structures to story structures. Both, she said, are now “innate” to her.

After her time at Chautauqua, Weiss went on to study music at Harvard, then obtain a master’s in performance from Yale and a doctorate from the Peabody Conservatory, completing her dissertation about the work of pianist Robert Schumann. Weiss has been at Goucher College since 1986, and is now a music professor there teaching performance of opera, musical theater, chamber music and solo piano.

As a student, Weiss has attended piano master classes at Sherwood-Marsh Studios, in rooms she used to practice in with one of the building’s namesakes, Ozan Marsh.

“It’s good to know that the piano program is still as vibrant and important as it was 50 years ago,” Weiss said.

In Open Recital, School of Music Students to Present Broad Range of Works 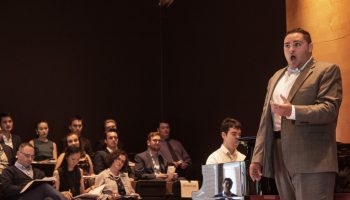