The first question a Pounders team member asked after winning the championship game was, “You got beer?”

The Pounders took on the Slugs in the championship game Wed., Aug. 8, at Sharpe Field. The team has been in the league for four

years. This game was nine innings, with no mercy rule in effect.

“It’s been a long time coming,” said Erik Tarr, the Pounders pitcher. “It was a hard-earned battle. (The Slugs) always play us tough.”

The Pounders won with a final score of 9-8, defeating the Slugs.

To start the game off, the Slugs got their first run off a sacrifice fly and an in-the-park homerun to score three runs. The Pounders didn’t score in the first inning.

In the second inning, the Slugs scored one run and the Pounders scored two runs. Jeff Miller, pitcher for the Slugs, threw two strikeouts in a row to close the inning.

In back-to-back innings. the Slugs couldn’t score a run, and the Pounders ended up taking the lead in the fifth inning by scoring three runs. The score was 6-5 going to the sixth inning.

The Slugs didn’t stay down for long. They got out of their drought and scored three runs. The Pounders didn’t get a runner on base in the bottom of the sixth, keeping the score at 8-5.

The Slugs didn’t score any runs for the rest of the game, but the Pounders scored four runs in the seventh inning and took the lead for the final time, going on to win the championship game 9-8.

“(We have wanted) to win for four years, so this feels great,” said Dylan Graziano, Pounders team member. “We love playing every year. This is a great league to play in.” 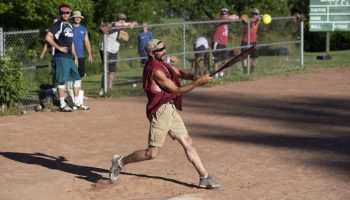 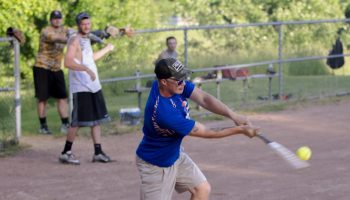