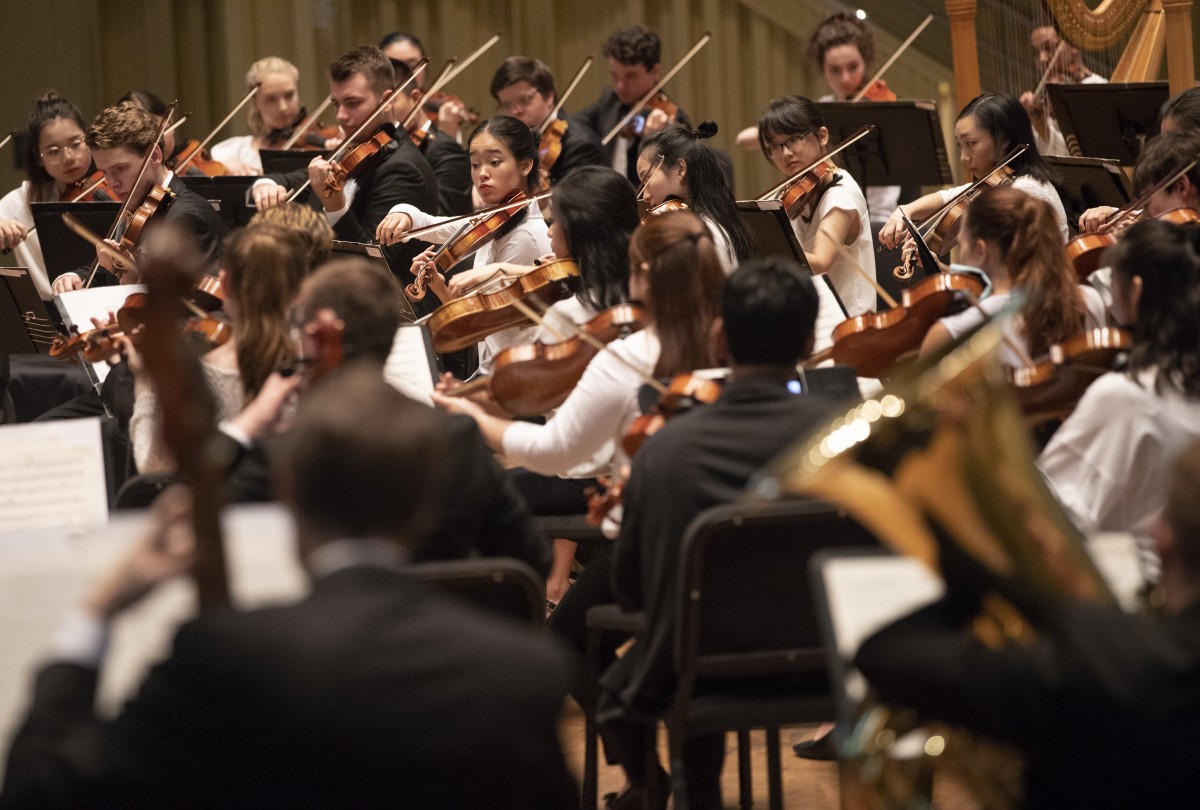 The Music School Festival Orchestra performs Monday, July 2, 2018 in the Amphitheater under the baton of Timothy Muffitt, the school's artistic and music director. RILEY ROBINSON/STAFF PHOTOGRAPHER

Monday, Aug. 13, is the last chance of the season to hear instrumental students from the Music School Festival Orchestra perform all together in the Amphitheater.

Timothy Muffitt, music director and conductor of the MSFO, said he has “mixed feelings” about the last concert after spending a great summer making music with this year’s MSFO students.

“It’s exciting to see (the last concert) as a combination of our work and to hear the extraordinary growth of these young musicians as an orchestra, as they’ve come together,” Muffitt said. “And for me, personally, just to be a part of that is very exciting and powerful.”

It also means, Muffitt said, that he will “be sorry to see them all leave.”

“We’ve been working very hard for seven weeks,” Muffitt said. “ … It would be sad to have these opportunities come to an end for the year.”

The concert at 8:15 p.m. Monday, Aug. 13, in the Amp will present music written by three Russian composers.

“Russian music is good for the MSFO because it involves the whole orchestra in a very significant way,” Muffitt said, “including harp and percussion and brass and woodwind sections. So it’s a very significant level of involvement for every (MSFO member).”

The MSFO will play Rimsky-Korsakov’s Russian Easter Overture, op. 36, under the baton of Yue Bao, the 2018 David Effron Conducting Fellow. A performance of Cello Concerto No. 1 in E- flat major, op. 107, by Shostakovich, featuring cello student Daniel Kaler as soloist, and Prokofiev’s Symphony No. 5 op. 100, B- flat major will both be performed under Muffitt’s baton.

Trombone student Stephen Whimple will be playing a second trombone solo, featured in Russian Easter Overture. Whimple said the trombones rarely hold melodies or are in the forefront in the orchestra, which is “usually the job of the woodwinds, or the trumpet or any of the strings.”

“What the trombones usually do in the orchestra is provide some sort of support consistently,” Whimple said.

But Rimsky-Korsakov wrote prominent solos in the second trombone parts in a few of his works, Whimple said.

“It’s very enjoyable for people that do end up playing his music,” Whimple said. “Because then, it is a nice surprise for somebody who is in one of the smaller roles (to be) given an opportunity to step forward and present an actual melodic passage … whereas I’m usually part of larger group and a larger effort to grab attention.”

Whimple will not be the only soloist at tonight’s concert. Cellist Kaler, who has been a member of the MSFO for two consecutive years now, will be performing as a solo cellist for the entire four movements of Shostakovich’s Cello Concerto. The solo is part of Kaler’s prize for winning the 2017 Sigma Alpha Iota Competition.

The SAI Competition rotates annually among the Instrumental Program, the Voice Program and the Piano Program. Kaler said the SAI Competition is an amazing opportunity that “we have right here in the Institution.”

Although this is Kaler’s second year in the School of Music, his mother, Olga Dubossarskaya Kaler, has been playing in the Chautauqua Symphony Orchestra for 24 years now. Kaler has visited the Institution every summer since he was 7 or 8.

“It’s a very special place for us,” Kaler said. “It’s real treasure to get to come here every summer.”

For Kaler, to be able to play as a soloist on the Amphitheater stage is particularly special.

“It’s so special because I get to play on that same stage where I watched pretty much every concert since I rst started going to concerts,” Kaler said. “That same stage.”

Kaler said the Cello Concerto is “a very grotesque piece, in a way,” written in 1959, six years after Joseph Stalin passed away.

“I think it very much reflects the struggles and the darkness that presided in Russia in those days,” Kaler said.

He hopes the audience will take away an understanding of “how difficult life was in the Soviet Union in the 20th century.

“It was probably the darkest century, for Soviet Russia particularly,” Kaler said. “Not just Soviet Russia, but it was certainly dark there. And my dad is actually from there.”

Tonight’s program will end with Prokofiev’s Symphony No. 5.

Tuba student Jacob Moore, who has a solo in this piece, said Prokofiev’s symphony “is actually like a little concerto for tuba.”

“Every note played is important,” Moore said. “This piece is asked on every orchestral audition, so it is a staple in the repertoire.”

Muffitt wants the Prokofiev to be the last work the MSFO performs this summer, not only because it is a piece that can get every member significantly involved, but also because it is the “most extraordinary symphony of the 20th century.”

“It really is unique in its expressive content,” Muffitt said. “I don’t know another work like it. (It is) one of the masterpieces of the 20th century.”

Muffitt said it is hard to know anything specific Prokofiev said about this work, but Muffitt said “(this symphony) does seem to capture a zeitgeist of optimism, (which) would come at the end of such a tragic time of the world.”

According to Muffitt’s personal understanding of the Prokofiev symphony, the piece not only expresses optimism, but also explores “a broad range of human emotion in an extraordinary depth.”

“Part of its extraordinary quality is that there is a sense of optimism as a symphony as a whole, but it also explores tragedy, grief, the unknown,” Muffitt said. “ … We have to realize that this is, I think, a combination of his reaction to what the world has just been through, and also perhaps his hope for the future.”