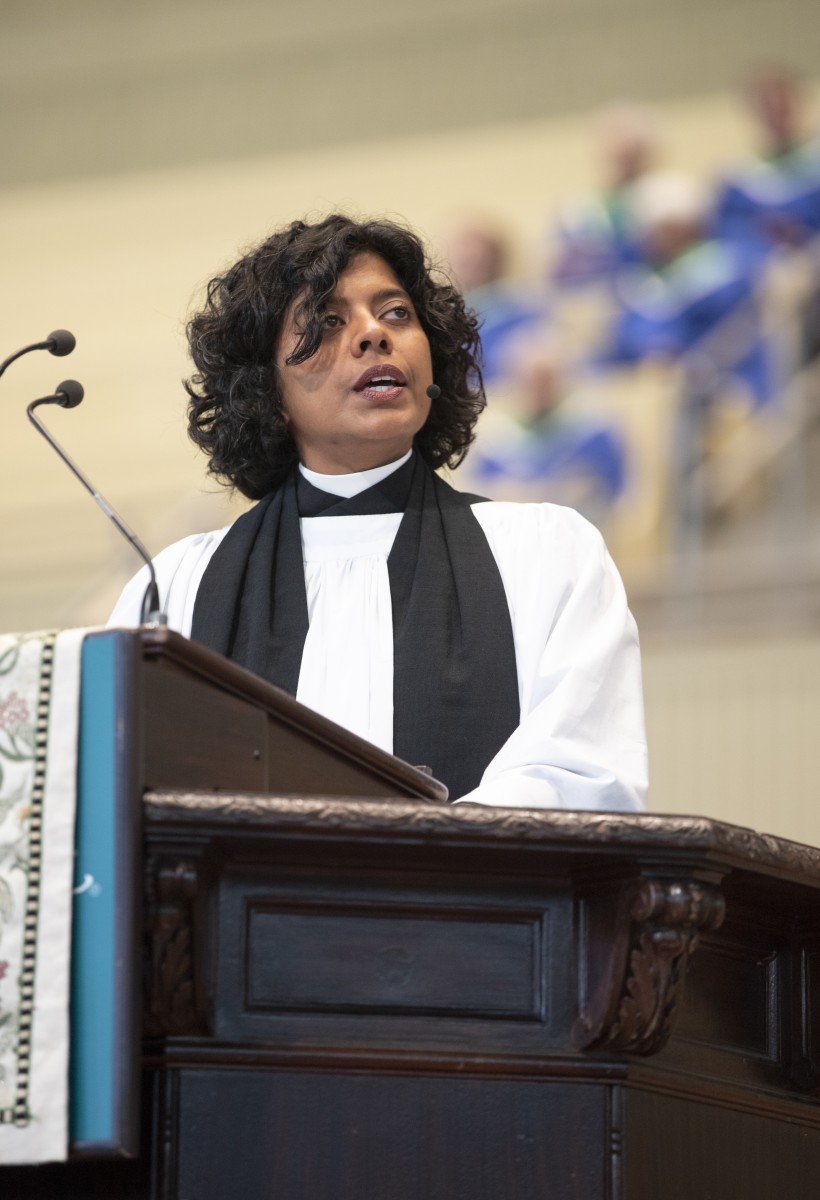 The Rev. Winnie Varghese chose Luke 2:15-20 for the Scripture reading at the 9:15 a.m. Wed., Aug. 22, morning worship service in the Amphitheater for a reason.

“You noticed that Mary does not speak,” Varghese said. “And the words of the angels are redundant. So I selected this text, ‘Mary treasured all these words and pondered them in her heart.’ ”

Her sermon title was “I Believe.”

Varghese noted that a lot had happened in Luke, Chapters 1 and 2, from the angel Gabriel announcing the pregnancy to Mary, to the angels singing to the shepherds, to the shepherds’ visit to the newborn Jesus.

When Varghese first started at St. Mark’s Church-In-The-Bowery in 2009, they had a pick-up Christmas pageant.

The church did not have enough children to plan a pageant, but they knew there would be many children visiting with family who would come to the Christmas service.

“We decided to invite the kids to come in costume, and we would make clear when in the service they should take their place or do whatever their character would do,” she said. “What could possibly go wrong?”

Varghese said the church musician showed up with her Shih Tzu, dressed in costume and ready to dance. Varghese went to the local costume shop and bought a bag of Christian pageant clothes.

“Who knew you could buy a bag of pageant clothes?” she said.

She also brought in some of her clothes from India and the requisite bathrobes — without which no Christmas pageant is complete.

During the service, Varghese would make eye contact with the children in costume to invite them to become part of the tableau.

In addition to the dog, there was a boy in a Spiderman costume with a shepherd’s staff, and his father came with him to the front wearing a towel on his head and carrying a staff.

Then Varghese noticed a child dressed as a Roman soldier. The boy had found the costume in the Christian pageant bag. She also called him up to the front.

“It was just perfect. We need to treasure and ponder this shadow (of the Roman soldier) over all the Christmas story,” she said. “If theologian Walter Wink had written a Christmas pageant, the soldier would be in it.”

Resistance, she said, lives in us.

The Christians in Kerala, India, where Varghese’s family is from, sent spices, rice and silk to the West. The Christians believe that the Apostle Thomas came to India in the first century and founded the church.

“I choose to believe that Thomas came,” she said.

There was a Jewish community in first-century Kerala that remained until the state of Israel was formed.

“They would have been colleagues of Thomas,” Varghese said. “They are our ancestors in the faith, and Thomas converted them. I choose to believe that happened.”

For centuries, the church in Kerala was under the Syrian Orthodox Church. Their liturgy was in Old Syriac, she said, very close to Aramaic.

In 1498, Vasco da Gama arrived from Portugal and brought Jesuit missionaries and the Inquisition with him to India.

“(The Portuguese) were horrified that the Christians (in India) were not using the Western Roman rite for liturgy,” Varghese said. “They collected the old, etched, decorated palm leaf liturgies and burned them.”

They also burned all the churches and built Western-style buildings with high towers.

“Our old buildings would have been low to the ground, designed to withstand rain like we have this morning,” she said.

The men with da Gama were dressed like Roman soldiers, and they were not the friends of the people of Kerala.

When she was young, Varghese wore a cross on a small gold chain, given to her by her father’s mother. She never took it off. The cross appeared to be made of two little sticks, and the top was bent. She spent time trying to fix it, thinking that she had somehow damaged it.

“It was bent as part of the design,” she said. “It is a sign of the Malankara Orthodox Syrian Church in India. It is called the Coonan cross.”

As the Malankara church was being persecuted, its members met in 1653 at Mattancherry, where Coonan beach is located on the Kerala coast, near the town of Kochi.

There were crosses on the beach, she said, and because there were so many people who wanted to take the oath, the leaders tied ropes to the cross so that everyone would be attached to the cross in some way.

“The force of the people who took the oath bent the top,” she said.

The church went underground as the Portuguese killed the Malankara priests. It was not until the Dutch East India Company came that the Malankaran church was able to reconnect with the Syrian Patriarchate.

“They pondered in resistance and remained firm in their belief. It was a radical disruption like death,” Varghese said.

It is not the nature of liturgy that is the affront to empire, she said, it is the human dignity that calls forth treasures from every person.

“My ancestors must have seemed obstinate, foolish and on a march to oblivion,” she said. “Like Mary, who cradled the Mighty Counselor close to her heart, we persisted in the face of danger. If we stand together, I believe that we will rise again.”

The Rev. Virginia Carr presided. Paul Burkhardt, a member of the Motet and Chautauqua Choirs for over 40 years and former commodore of the Chautauqua Yacht Club, read the Scripture. The Motet Choir sang “Love Consecrates the Humblest Act” by Lim Swee Hong. The choir was accompanied by Barbara Hois on the flute and Jared Jacobsen, organist and coordinator of worship and sacred music, on the piano. The Mr. and Mrs. William Uhler Follansbee Memorial Chaplaincy and the Daney-Holden Memorial Fund provide support for this week’s services.