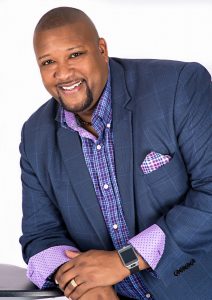 The Rev. David Anderson believes that “gracism is the solution to racism.”

“Gracism is the extension of grace and positive favor towards others, regardless of — and sometimes because of — color, class or culture,” said Anderson, who is senior pastor at Bridgeway Community Church in Columbia, Maryland. “The ‘G’ added to racism represents God. You can solve any problem when you put God in front of it.”

Anderson will be the chaplain-in-residence for Week Three. He will preach at the Service of Worship and Sermon at 10:45 a.m. Sunday in the Amphitheater. His sermon title is “The Powerful Art of Inclusion.” He will share his faith journey at Vespers at 5 p.m. Sunday in the Hall of Philosophy.

“We believe gracism is the solution to racism,” Anderson said. “We talk about it, we live it out, and we try to inspire others to become gracists, as well.”

Anderson is the founder and president of the BridgeLeader Network. As the founder and senior pastor of Bridgeway Community Church, Anderson serves a congregation of over 5,000 weekly attendees from more than 52 different nations.

He is one of the world’s leading authorities on building bridges across the divides of race, faith, culture and wealth. His global work has brought hope and healing to communities and families, and to people in Africa, Asia, Europe, the Middle East and North America — including work in Ferguson, Missouri, and Baltimore. Wherever there is a divide, Anderson seeks to build a bridge through relevant and intelligent conversation.

He earned his Ph.D. in 2001 from Oxford Graduate School’s American Centre for Religion and Society Studies, while studying and defending his essays at Oxford University in England. Anderson currently serves as the Chancellor of Omega Graduate School.

He is the author of Letters Across the Divide, Multicultural Ministry, Gracism: The Art of Inclusion, I Forgrace You: Doing Good to Those Who Have Hurt You and most recently, How to Think like a Gracist. He is editor and co-author of the Multicultural Ministry Handbook: Connecting Creatively to a Diverse World.