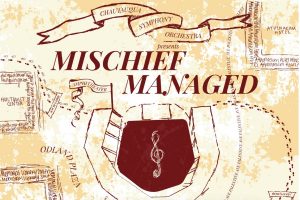 If the Institution grounds appeared on the Marauder’s Map, thousands of footprints would be appearing Saturday around the Amphitheater.

Chautauqua Symphony Orchestra will perform “Harry Potter and the Prisoner of Azkaban in Concert” at 8:15 p.m. Saturday, July 6 in the Amphitheater. Conducted by internationally recognized conductor and film composer John Beal, the CSO will perform the film’s score live while the film plays overhead.

Beal, who first visited the Institution last year as the guest conductor for “Harry Potter and the Chamber of Secrets in Concert,” said there is no better way to experience a film’s score than with a live orchestra — and these scores will become the next classic compositions.

“I am a strong believer that there is nowhere else but on the concert stage one can experience the emotional impact of a film score properly presented with a living, breathing group of master musicians,” Beal said. “This is the new ‘classical’ music of our era, and our major film composers are right up there, in my estimation, with the greatest composers of history.”

Many concert attendees may be unfamiliar with symphony music, Beal said — but the performances are an opportunity to experience the music beneath the movie.

“For some people, this is the first time they have ever heard a full symphony orchestra perform,” Beal said. “Some have no idea that this is what is happening underneath the dialogue and action in a movie. I hope these experiences will bring more and more people into the symphony hall to hear everything they possibly can from our musical heritage.”

Beal said the score of “Harry Potter and the Prisoner of Azkaban” is his favorite of film composer John Williams’ works because of the music’s versatility and complexity.

“This particular score of John’s is quite interesting, in that it pays tribute to an extremely wide range of musical history, from early Renaissance to jazz to traditional John Williams,” Beal said. “The colors are fascinating, and the challenges of performing these incredibly varying tempos and styles while staying in perfect synchronization with the movie are psychologically and emotionally exciting, for both the orchestra and the audience.”

“Every show is packed with fans of all ages wearing Harry Potter clothing,” Beal said. “I went to a concert at the Hollywood Bowl last weekend and there were 16,000 people — many of whom were quite middle-aged adults — in all sorts of Harry Potter looks.”

To Beal, audience excitement and involvement is an integral part of these concerts.

“One of my favorite things about conducting these great shows is being able to hear the audience responding — and we definitely encourage that,” Beal said. “We hear delighted children, we hear the cheers and boos from teens and adults. It makes the incredibly difficult challenge of intense preparation and performing worthwhile.”

Deborah Sunya Moore, vice president of performing and visual arts, said that every season, Chautauquans turn up in the thousands for the Harry Potter events.

That audience, Moore said, is made up of all ages — especially young people, who can experience the films they grew up with in a brand new way.

“Seeing every seat filled and seeing such an intergenerational audience is particularly thrilling for us, to see so many young people seeing a live orchestra performing something that is meaningful and magical for them,” Moore said.