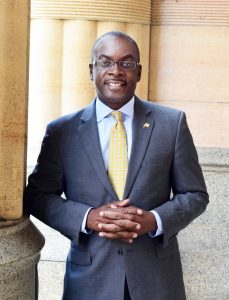 Although Buffalo Day at Chautauqua has come and gone, this weekend the Chautauqua Women’s Club is sponsoring a second day in recognition and appreciation of the transformation of New York’s second-largest city. Situated within Erie County and along Lake Erie’s southeastern shore, this border city forms part of the Canada-United States Buffalo Niagara Region.

A “Celebrate Buffalo Arts” sale featuring pieces from 15 select Buffalo artists will be held from 9 a.m. to 5 p.m. Saturday, July 6 under the tent on the lawn in front of the CWC House.

And at 2 p.m. in the Hall of Philosophy, Buffalo Mayor Byron W. Brown II will give a talk titled, “Inclusion Infusion: How embracing diversity and inclusion is bettering the City of Buffalo in government and beyond,” for the Contemporary Issues Forum.

“From graduation and going forward, I was feeling Buffalo was a very segregated city,” Brown said. “There was a divide. Even though Buffalo was considered a City of Good Neighbors, the neighbors didn’t live together. There was a decline in certain neighborhoods and an income decline.”

Brown, who was elected in November 2017 to his fourth four-year term leading Western New York’s largest city, grew up in Queens. A first-generation college graduate, he ventured west to earn a dual Bachelor of Arts degree in political science and journalism at the State University College at Buffalo, also known as Buffalo State College.

“I had an interest in how politics helps shape our world, our nation and our communities,” Brown said. “I wanted to work in public communications in a political environment, which I did.”

Although he started out as a regional sales representative for Bristol-Myers Squibb after college, Brown was soon hired as the chief of staff to the president of the Buffalo Common Council, the city’s representative assembly and legislative branch. He then served for two years as an aide to an Erie County legislator, and another two years as an aide to the deputy speaker of the New York State Assembly.

“From those positions, having done extensive work in the community, I made the decision that I could have a greater impact on the community than by being a staffer,” Brown said. “I was interested in community development and improving the landscape of the community.”

In 1989, Ebony magazine recognized Brown as one of “30 Leaders of the Future,” citing his leadership skills in particular. Two years later, the Southern Christian Leadership Conference’s Buffalo Chapter bestowed on him the Martin Luther King Jr. Award for community service.

Brown said that economic development — “creating jobs and opportunities for other residents” — was very much of interest to him, as was “getting average, everyday residents more involved so they’d have a larger voice in the community.”

After Erie County’s executive appointed him director of the county division of the Equal Employment Opportunity Commission, Brown served in the position for eight years. In July 1993, he resigned to run for public office.

The same year, Buffalo Business First included him on its “40 Under 40 Honorees.”

Brown’s first publicly elected office was the seat for the Buffalo Common Council’s Masten District, which he won in September 1995, after defeating the incumbent, who had held it for 18 years. Brown was reelected twice to this seat.

“There were many people who told me, ‘Don’t do it or you’ll lose,’ ” he said. “I had a vision that I could … bring people together, and through diversity, equity and inclusion make Buffalo more vibrant. … Now in 2019, being in my fourth term, we’ve seen well over $7 billion of economic development in the city.”

When he first became mayor in 2006, Brown said he “wanted to get people to believe in themselves and each other more.”

Enhancing the quality of public education is one of many ways in which he has been trying to raise individual and community self-esteem.

Although New York’s education law does not provide mayors with the authority to manage the city’s public schools, Brown said that his efforts to support public education include increasing municipal aid and instituting reading and higher education programs.

“I have a literacy program that I started in the New York state legislature,” Brown said. “ ‘Reading Rules’ is the mayor’s summer reading call. Last year, more than 2,000 children completed the summer reading challenge.”

According to Brown, this year the city will be employing more than 1,700 young people. Among other things, program participants learn job and life skills that better prepare them for continuing education and future success.

In 2011, under Brown’s leadership, Buffalo became the second city in the nation to partner with the nonprofit Say Yes to Education. The city contributes to a Say Yes fund that pays for support services for at-risk, economically disadvantaged youth and their families. It also provides full scholarships to impoverished children for college or vocational training.

Buffalo’s finances present a challenge that is central to Brown’s mayoral responsibilities.

“The management systems we have put in place enabled us to increase the city’s credit rating and reduce its tax burden,” he said. “In 2019, people are paying less in residential and commercial taxes than they were in 2005. That has stimulated more investment residentially and commercially.”

The prime lending rate in the City of Buffalo has also been reduced.

During the past several years, Buffalo has been receiving national and international attention for its booming waterfront redevelopment, Buffalo Niagara Medical Campus, expanding fine and performing arts, in addition to new and historic architecture.

According to Brown, economic development has increased in all directions. In the city’s previously neglected East Side neighborhood, he said there are currently more than $300 million worth of redevelopment projects.

Job creation is another accomplishment of which Brown is proud.

“Just last week M&T Bank made the decision to bring its tech hub, with 1,000 jobs, to Buffalo, and to locate it in One Seneca Tower, the tallest building in Buffalo,” Brown said. “There’s a much greater sense of optimism.”