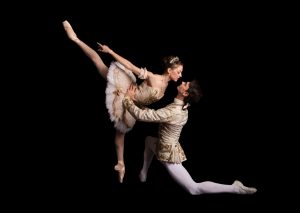 Returning to Chautauqua Institution for the first time since its debut in 2017, PBT will present two beloved ballets — George Balanchine’s “Rubies,” and an abridged Sleeping Beauty — at 8:15 p.m. Saturday, July 13 in the Amphitheater.

“This is a Sleeping Beauty … of a different sort,” said Orr, who announced he will retire in June 2020. “I’m not really telling the story; I’m just going through and doing the divertissement, the different dances that go on.”

Orr’s Sleeping Beauty, accompanied by the CSO, will open with the christening of Princess Aurora and six fairy variations. Act I will include, in Orr’s words, the ballet’s “key scene” — the Rose Adagio, a pas de deux between Aurora and four suitors.

The CSO’s rendition of Pyotr Ilyich Tchaikovsky’s musical score, under the direction of CSO Music Director and Conductor Rossen Milanov, will be the second of three performances in its inaugural “Russian Festival.”

“Tchaikovsky’s Sleeping Beauty is one of the three big ballets, alongside Swan Lake and The Nutcracker, that really made him one of the most important composers in the ballet world,” Milanov said.

Milanov said Sleeping Beauty focuses on the visual and auditory aspects of the performance, rather than dramatic elements.

“Sleeping Beauty is a little more decorative in nature; it’s more about the ballet itself than having some big, dramatic, controversial, romantic story like Swan Lake,” Milanov said. “This one is mostly for the eyes, and of course the ears; Tchaikovsky was one of the most colorful orchestrators and masters of the short formats. … He had the gift to find the perfect music to match the dance variations that occur throughout the ballet.”

“This particular piece belongs to the period (of Stravinsky’s work) in which we could hear very strong influences of Russian folk music,” Milanov said. “It’s not as abstract as some of his later works, but it has this incredible ingenuity — the way he works with musical material and combines them together. There is always a fascination of how these collages of sound could function together.”

“This is going to be great fun,” Orr said. “It’s an honor to be part of such an incredible institution.”