Picture this: There’s a house in sun-baked Riverside, California, with a porch and two brown wicker chairs out front. It’s 90 degrees out. Maybe there’s a breeze. 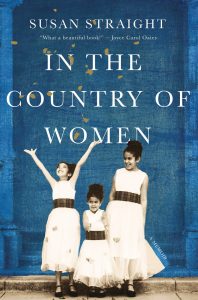 In one of the chairs sits Susan Straight, acclaimed author, National Book Award finalist, co-founder of the creative writing MFA program at the University of California, Riverside, and in the other — you.

Though few of her readers will get the chance to experience it, Straight’s Riverside porch is real. It acts as a kind of gathering place for her neighborhood, a place where informal storytelling is done by the friends, family and neighbors she’s known all her life.

“I live in the kind of neighborhood where everyone walks by, and everyone sees me on the porch,” Straight said. “I’m trying to write an essay right now about all of the people who have come to sit on this porch to tell stories, six feet apart.”

Straight’s fascination with storytelling is particularly prevalent in her meticulously researched memoir, In the Country of Women, in which she charts the lives of her extended family going back as far as the mid-19th century.

At 3:30 p.m. EDT Thursday, July 30, Straight will present In the Country of Women to a virtual audience on the CHQ Assembly Video Platform. Straight’s memoir, originally published in August 2019, is the Chautauqua Literary and Scientific Circle’s Week Five selection.

Though a glowing screen may not seem like the ideal medium for a book presentation, Straight said she’s excited about the potential of CHQ Assembly to bring her story — and her family’s stories — to a wider, more diverse audience.

“A lot of young people might be able to watch, and might be able to think about how many stories, especially told by women and marginalized peoples, are told orally,” she said. “My memoir is really this collection of stories about six generations of women, all the way from the first women we knew about — one was enslaved, and one was a pioneer who was crossing the country.”

According to Sony Ton-Aime, Chautauqua’s director of literary arts, the fact that these women’s names won’t be found in any history book doesn’t diminish their importance: It enhances it.

“Straight’s book is the story of America, or at least the one we wish it to be; people, most specifically poor women of color and immigrants, facing and surmounting the barriers put in their way,” he said. “In the Country of Women is a great addition to this week as we celebrate the women’s vote centennial, because it shows the work we have yet to do and the importance of community in this work.”

This program is made possible by The Caroline Roberts Barnum and Julianne Barnum Follansbee Fund.