Systemic racism has existed in the United States since the country’s founding, and yet, just five years ago, Tricia Rose found that the term was barely used.

“I would find over and over again people who are generally quite well educated, even on issues of race or African-American culture and history would earnestly ask me, ‘So, what is this structural or systemic racism? What are you talking about?’” Rose said. “Like it was just beyond the grasp of their imagination.”

Systemic racism is a process by which practices and policies — past and present — generate and reinforce racial inequalities in every area of society, such as health, housing and criminal justice. Rose said that when she explained systemic racism to people, “particularly white people, but not limited to white people,” she was consistently told that racism in society ended decades ago because of the Civil Rights Movement.

Data also supported that many people thought little about systemic racism; a survey around seven years ago found that 80% of white Americans believed the U.S. was at a point of racial equality, or close to it.

“The consistency of this story became just shocking and fascinating to me,” Rose said, “because it wasn’t as if people had vastly different conceptions and they’re coming up with stuff. It was like this was the story.”

Rose is the director of the Center for the Study of Race and Ethnicity in America, Chancellor’s Professor of Africana Studies and associate dean of the Faculty for Special Initiatives at Brown University. Rose talked on Wednesday, July 15, on the CHQ Assembly Video Platform, with Vice President and Emily and Richard Smucker Chair for Education Matt Ewalt. The conversation, titled “Artistic Solutions,” discussed how society uses storytelling and metaphors to understand systemic racism. She is working on a project titled How Structural Racism Works, a public information academic project which shows how systemic racism happens in theory and in daily life.

In the past few months, Rose said more people have been talking about systemic racism.

“I’m really pleased that it’s got more traction, but I’m concerned that a lack of understanding about what it is might also have its own perils,” Rose said.

Rose said that leaders of the Civil Rights Movement understood more work had to be done.

“Martin Luther King Jr. and everyone else involved knew, … certainly at the legal level, that there were tremendous compromises made in order to get things passed, and that those were just baseline starting points,” Rose said. “There were many, many things Lyndon Johnson and others knew, the Kerner Commision Report knew, that those laws did not necessarily result, automatically, in anything approximating racial equality or equal access.”

“And if you see yourself as agreeing with racial equality and believing that society as a whole has eradicated (racism), then what explanations are you left with to explain this disparity?” Rose asked. “What you end up being left with are behavioral examples, and behavioral-based evidence.”

These examples include believing that certain cultures are lazy, and Rose said “you get this at the high political level, and you get this in everyday storytelling.”

“A systemic analysis is asking us to look at the way all of those factors play a role together, you see? And once you’re looking for it, you find it everywhere,” Rose said. “It’s amazing how much you realize others have been overlooking when you really start looking.”

Rose stressed the importance of metaphors in order to understand systemic racism. A birdcage is commonly associated with systemic racism; Iris Marian Young, a political theorist, said that if a person tried to understand racism by looking at one wire of the cage, it is hard to understand why the bird is trapped. Young said only a large number of wires connected in a certain way will make sure the bird can’t escape.

Rose believes that there are a few aspects of racism the birdcage image misses, or is sometimes confusing — for example, does the cage have a door?

“If there’s no door, how do people get into this cage? And then if there is a door, does it open out? Does it open in? Who’s opening the door?” Rose said. “Who has the key? Is there only one exit? Is it through the door? Are there other exits? Is it really just a one-area problem? So you see, the birdcage gets us going, but it also raises questions.”

Rose said that as people understand systemic racism more, they are able to say why a certain metaphor does not work, as the topic is very complex. Another metaphor for systemic racism, which Rose said is more successful than the birdcage in some ways and less in others, is a web. She said that webs can be everywhere in society, like in transportation and housing.

“If you think from a Spider-Man perspective, web covers everything. Or … think about a web that an actual spider produces, these fine and stretchy networks of fibers that people get caught in,” Rose said. “You can push and you can stretch and you’re still in the web.”

A web is also flexible, but stuck in a certain spot.

“It’s very difficult to decide where you would want to draw and put some energy because, well, what’s the difference between the top right corner and the bottom left corner?” Rose said. “How do they relate to one another?

The third metaphor Rose developed for the  How Structural Racism Works project is a series of gears. Each gear is a major institution in American society, like housing and education, and each cog is a policy that interacts with other policies on another cog to push systemic racism. Rose likes this metaphor for a few reasons, including that gears work together to keep moving.

“I love it because I believe in the monkey wrench. I believe that you can put a monkey wrench in education and housing discrimination … and have a big impact,” Rose said.

Ewalt then asked where, such as in schools, news or popular culture, should these metaphors and ways of storytelling be taught.

Rose said that she is writing a handbook that will be concise and accessible. She said that when she travels on airplanes, her job comes up in conversation with other passengers.

“You don’t want to be trapped going cross country in the seat with some first-class guy drinking way too many whiskies and having an argument about race,” Rose said.

Rose thought that if she had a handbook, she could give it to people who ask about her work and they could read and educate themselves on their own time.

She also said brief educational YouTube videos could explain certain areas, like criminal justice, and stressed the importance of retelling stories that show how systemic racism works person to person. The story of Trayvon Martin’s death, for example, is often conveyed as one of a chance encounter with a racist, Rose said, but “when you look at it from a systemic standpoint, there are all of these factors that colluded to bring him there.”

Martin was in Florida because he was suspended from school, for infractions that should not have resulted in suspension, and he was visiting his father. Rose said that Black students are “hyper-punished, a criminal justice phenomenon that has been fed into the school system for infractions that would otherwise go unnoticed.”

Another factor Rose said led to Martin’s death is that when neighborhoods have a population of 10 to 15% Black people, white people get “very anxious.”

“They call the police more, they feel worried and they start to move. And when they start to move, that tipping point turns it into a Black neighborhood and brings with it the economic discrimination that, of course, follows people around,” Rose said. “So people are very panicky in protecting neighborhoods.”

Martin’s father lived in a neighborhood that was at this tipping point, and George Zimmerman, who killed Martin, was involved in the real estate business. Rose said Zimmerman was likely aware of the transition in the neighborhood

“When you put Zimmerman in context in the town and the racial culture of segregation that drives property values,” Rose said, “and when you put it in the context of systemic school discrimination based on hyper-punishment of young Black people, especially boys … it’s not the story of a chance encounter between George Zimmerman and Trayvon Martin.”

Ewalt’s final question for Rose: What are the first steps in understanding and combating systemic racism?

“There has to be a process of sort of depersonalization, because I think what gets activated for people is a blame narrative about racism. ‘Am I a bigot?’ ‘Am I a racist?’ It becomes a personal attack to have the conversation. And I just don’t think that’s a very productive way to start a conversation about anything volatile.”

“They shouldn’t come up without (being educated about systemic racism) and then be shocked, disillusioned and depressed about what the world is really about when it’s at its worst,” Rose said. 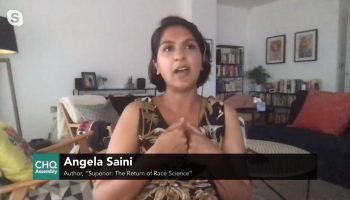 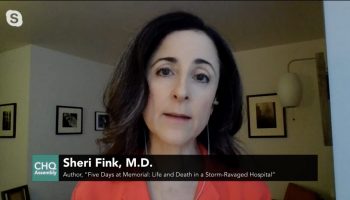