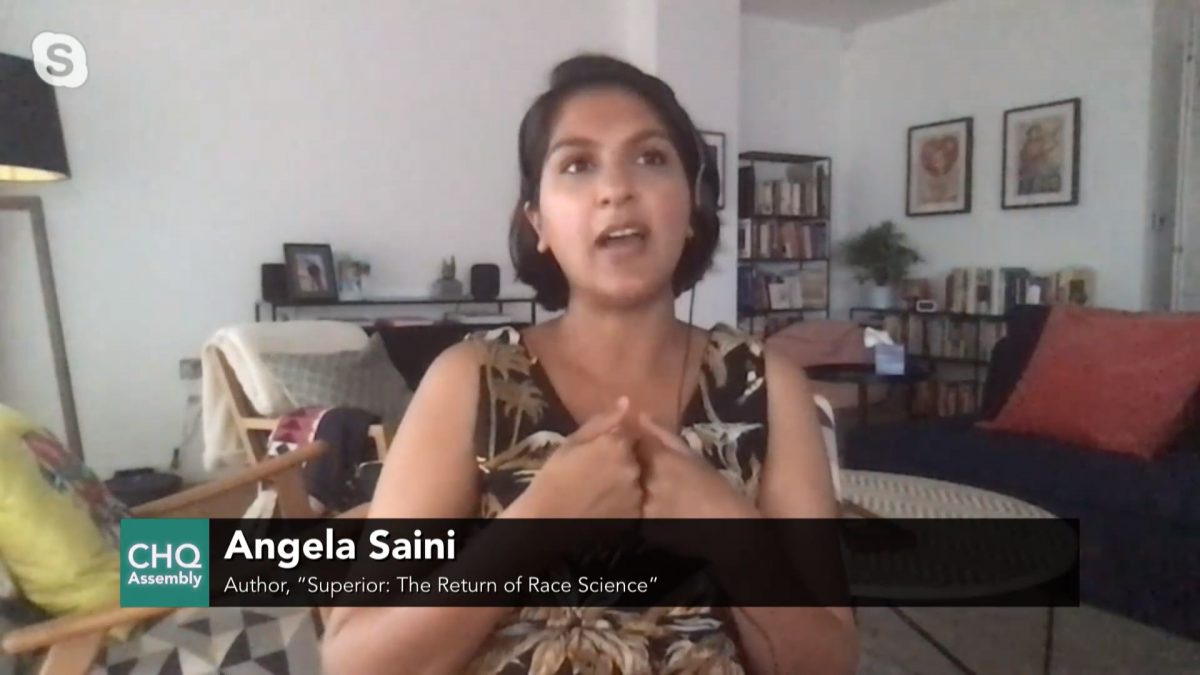 Some people think of race, as science journalist Angela Saini said, “as a biological entity, something that resides within your body.” But this idea could not be further from the truth, and racial categories that people use now were created during the time of the European Enlightenment. Philosophers and naturalists of this era were categorizing the natural world, so Saini said they did the same with humans.

“They were doing this with a huge absence of knowledge, because of course many of these people had not traveled the world,” Saini said. “They didn’t understand, for example, how to separate culture and language from biology or genetics.”

Saini said that these categories were almost-randomly created, with some people believing that there were a few races, and others that there were thousands. Before the Enlightenment, she said that the word “race” was used in reference to small tribes or families. Race now commonly refers to continents of people “united under one biological banner.”

“We try and read by race using genetics, and we always fail,” Saini said.

As well as being a journalist, Saini is the author of Superior: The Return of Race Science, which traces the history of long-held beliefs of biological racial differences in the world of science. At 10:45 a.m. EDT Thursday, Aug. 13, 2020, on the CHQ Assembly Video Platform, Saini was in conversation with Vice President and Emily and Richard Smucker Chair for Education Matt Ewalt on the topic “The Return of Race Science.” Their conversation was part of Week Seven of the Chautauqua Lecture Series, themed “The Science of Us.” Saini discussed the origins of the social construct of race, the history of racial science and its lingering threads in science and politics.

Saini said that the difference between humans is not random, and people are more genetically related to their family. The more extended the relationship between family members, she said, the weaker the genetic relationship.

When people live for generations in the same area or village, Saini said people could tell which village an individual was from slight, physical traits. As people looked at bigger areas, such as states and countries, these genetic similarities went away quickly.

“When you get to the continental level, which is the level at which we’re talking about racial differences, then it’s almost meaningless,” Saini said. “It has almost no statistical power whatsoever.”

Saini said that racial differences are often brought up in health, such as the sickle cell trait. Black Americans have higher rates of the trait than white Americans, so she said many people assumed that it was a result of race. Saini said that the sickle cell trait is not unique to Black people; the trait is traced to areas of the world where malaria is common, because it provides a resistance to the virus.

Ewalt asked Saini to discuss the origins of race science.

“It is made real by politics. That is how race works,” Saini said.

Saini said scientists sometimes treat social constructs, like gender, as biological instead of cultural. Naturalist Charles Darwin, for example, noticed that women had different jobs than men, so he concluded that women were less evolved and naturally less intelligent than men.

When you have, for hundreds of years, used the premise of race as the basis for studying human difference, you can’t abandon that overnight,” Saini said. “Even though you may be committed to this idea of anti-racism, even though you may not be a eugenicist anymore, you don’t shed that baggage overnight. It lingers in the way that you think about people.”

“Of course, there is no scientific connection there,” Saini said, “just an observation he’s made culturally, and then drawn a kind of scientific conclusion out of it.”

Saini said that many 19th-century race scientists had ungrounded ideas around race — for example, the idea that Black people who escaped from their enslavers were ill, as it was assumed at the time that “to be enslaved was a kind of natural condition of Black people.”

She said that after the Holocaust showed what happens when eugenics is “taken to its horrific logical conclusion, which is such a race is inferior, how do we eliminate them,” the global scientific community moved race out of biology and into social sciences.

“When you have, for hundreds of years, used the premise of race as the basis for studying human difference, you can’t abandon that overnight,” Saini said. “Even though you may be committed to this idea of anti-racism, even though you may not be a eugenicist anymore, you don’t shed that baggage overnight. It lingers in the way that you think about people.”

Saini said one such anti-racist scientist was Luka Cavalli Swartz, one of the founders of the field of population genetics. When Saini talked to Swartz before his death in 2018, she said he referred to mixed-raced people as “hybrids,” which she said is “completely the inappropriate language because, of course, we are not different breeds.”

“I still see that phrase being used in far-right circles and by scientific racists today, and yet here was this anti-racist scientist using that kind of language,” Saini said. “That is the problem that we have, but even in very well-intentioned people within the sciences, there is that lingering remnant of thinking about people in this kind of racialized way.”

Ewalt asked how else race science can be seen in 2020.

Saini said the use of racial categories as biological ones can be seen within the COVID-19 pandemic. With differences in deaths and critical infections between racial categories in the U.S. and United Kingdom, she said prominent geneticists and medical researchers are publicly speculating that there might be a genetic reason for the difference.

Saini said that Black Americans have always experienced racial disparities in health, including dying of “almost everything at greater rates than white Americans.” She also said that “many, if not most” people socially defined as Black in the U.S. have mixed ancestry.

“How plausible is it to say that this very diverse group of people, socially defined as Black, are so genetically disadvantaged that they will die of everything at greater rates than everybody else? That just doesn’t make any logical sense,” Saini said. “You don’t even need to be an epidemiologist to know that that doesn’t make logical sense.”

Ewalt then asked Saini about her interactions with scientists who believe they are truly objective, and do not acknowledge their bias.

Saini said that she has met many scientists who readily admit that science in the past was biased, and that race science and eugenics are pseudosciences. But those same people are not able to admit that current scientists might have bias and are affected by politics.

“So many scientists still behave as though they sit above culture, not like any other human being,” Saini said, “almost like an ethereal, deity-like creature that isn’t affected by what’s going on in the rest of the world.”

As a journalist, she is alarmed when a person tells her they are perfectly objective.

“When somebody says that to me, I know that I have to be careful, because that means they’re not examining their own biases; that means they’re not taking them into account, and they’re much more likely to make mistakes,” Saini said. “It is possible, theoretically possible at least, to achieve objectivity, but only by examining your own biases and taking them into account.”

Saini then talked about her own biases. While she was working on Superior, she expected scientists to tell her that there were loose ties between the color of someone’s skin and their health. Instead scientists told her, “‘This is just nonsense, racist nonsense.’ High-level geneticists telling me again and again that there is absolutely no tangibility to this idea.”