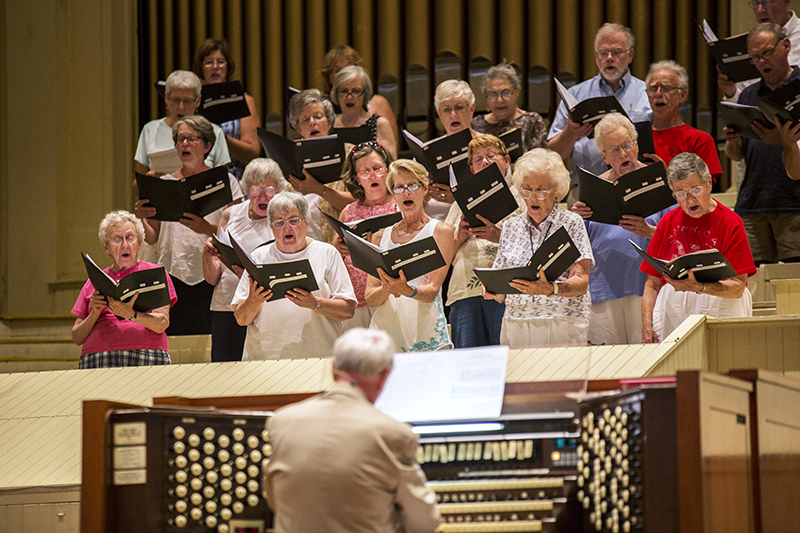 As a kid, Jared Jacobsen spent his summers sneaking out of his children’s activities at Hurlbut Memorial Community United Methodist Church and racing over to hear the last flashy organ piece of that Sunday’s Sacred Song Service. Something about the Massy Memorial Organ’s magical sound always sparked Jacobsen’s imagination, and he would let the Amphitheater’s grand acoustics envelop him for a few transfixing minutes before dashing back to Hurlbut Church just before his parents arrived to pick him up.

Jacobsen began studying piano at Chautauqua Institution at age 5, when that childhood tradition began, but would later go on to both coordinate and play organ during those services. This week marks the start of his 66th consecutive summer at Chautauqua institution: the place that first inspired his fascination with piano and organ performance.

This summer, Jacobsen, Chautauqua’s organist and coordinator of worship and sacred music, will lead weekly Sunday evening Sacred Song Services in the Amphitheater at 8 p.m. The performances are a hymn festival with varying weekly themes, offering an experience unique from traditional church services. Sunday’s theme is “I Sing Because I’m Happy,” which is also the title of its opener: a gospel hymn by Rollo Dilworth. Jacobsen said the theme reflects Chautauquans’ desire to celebrate their summer return with song.

“A lot of people do [sacred song services] in other small churches because they want to sing with a big group in a wonderful space,” Jacobsen said. “Then there are people in very large congregations who come just because [they] know singing in Chautauqua is unlike singing anywhere else in the world.”

Although this summer is his 11th year as Chautauqua’s coordinator of worship and sacred music, for 10 previous years Jacobsen was “happy as a clam” just being Chautauqua’s organist. But after he was convinced to work with the choir that first year, Jacobsen said he’s “had a ball” ever since.

“I’m doing what I love to do in the place I’ve always wanted to do it, and it’s kind of a love affair between me and the choir singers here,” Jacobsen said.

Taking on the coordinator role seemed natural for Jacobsen, because he was already familiar with the Sacred Song Service’s traditions.

The hymn “Day is Dying in the West” was written entirely and exclusively for Chautauqua in 1877, only three years after the Institution was founded. The 1865 hymn “Now The Day Is Over” had its lyrics written for Chautauqua, and both songs are long-lasting traditions that play during every Sacred Song Service.

But the pinnacle of every service since 1907 has been its closing song: “Largo” from George Frederick Handel’s opera Xerxes. Jacobsen refers to “Largo” as the closest thing Chautauqua has to a holy relic, and he said it’s almost always played in a loud triumph, letting the organ go full tilt.

Even early last July when technical difficulties left the Massey Organ out of commission, Jacobsen still needed to close with “Largo.” Although unconventional, he ended up playing the piece on a piano.

“It wasn’t as scary as it could have been, although ‘Largo’ is such a big deal here that you’re really mindful of not blowing it,” Jacobsen said. “If people don’t get ‘Holy, Holy, Holy’ in the morning on Sunday, and they don’t get ‘Largo’ on Sunday night, then they feel cheated with their Chautauqua experience, because those are really the landing lights.”