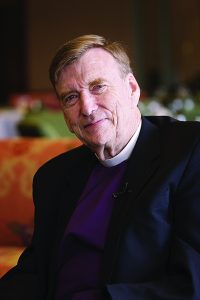 The now-retired Episcopal bishop of Newark was living in a small, racially segregated town in North Carolina when he boldly supported the civil rights movement, leaving him unpopular with his white congregation.

Despite backlash, Spong said he viewed this label as a “great honor,” and continued to challenge norms of the Episcopalian faith throughout his life, advocating for various forms of social justice and a
less literal interpretation of the Bible.

This week Spong will give five lectures, each at 2 p.m. in the Hall of Philosophy. The lecture series is titled “Biblical Literalism: A Gentile Heresy,” and is based on Spong’s most recent book, which features the same title. The book argues that Jews, rather than Christians, wrote the Gospel of Matthew, and the text should be interpreted from a Jewish, and very non-literal, perspective.

Each of Spong’s lectures will focus on an episode from his book, and today’s is titled “Matthew introduces the Virgin Birth,” which focuses on the gospel’s depiction of the virgin birth and oppressed women.

Despite his viewpoints today, Spong grew up practicing in an evangelical Episcopal church in North Carolina that taught strict fundamentalism, or literal interpretation of Scripture. Spong said he was taught that prejudices against women, Jews and homosexuality were supported by the Bible, and he spent his life growing out from under that mindset.

“A lot of people, when they get in that sort of rebellion, decide to bag the whole religious enterprise. But for reasons I don’t fully understand, I never could do that,” Spong said. “What I decided what’d I’d do is to go so deeply into it that I could escape the boundaries of this prejudiced intolerance, and find something different and more profound that might actually last in the 21st century.”

Advocating against segregation and racism initially made Spong an enemy of both the Ku Klux Klan and his congregation, but eventually the local Chamber of Commerce named him “Man of the Year” for his contributions. However, the adversity did not end there.

Spong ordained the first openly gay male living with a partner to the priesthood in the Episcopal Church in 1989, just months before marrying his wife, Christine. During their first year of marriage, Spong said they received close to 5,000 letters of hate mail. Spong also received 16 death threats throughout his life.

But despite such backlash, Spong decided to follow the example of his mentor, Bishop John E. Hines, and hold steady in his beliefs.

“Once [the bishop] thought he was doing what was right he did not waver, he did not politicize, he didn’t bend to accommodate anybody,” Spong said. “I thought that was the best way to do it. If you’re gonna stand, you don’t wobble — you stand.”

But Spong’s radical viewpoints were not automatic. He gained them by approaching unfamiliar perspectives with humility, lots of questions and an open mind. It was while living in Hoboken, New Jersey, that Spong first asked a doctor to educate him on issues of sexual orientation, admitting his own ignorance to a group of medical professionals.

After long conversations with medical faculty about their research, Spong maintains the opinion that people do not choose their sexual orientation; it is something they are “awakened to.” But it was his three daughters who first awakened Spong to the idea of feminism and criticized him for initially overlooking the issue of gender inequality. Spong now identifies as a feminist to anyone who will listen.

In today’s lecture, Spong will analyze the Gospel of Matthew’s depiction of females. Spong said its stories feature several women who are judged and sexually compromised due to societal standards. But rather than claiming those stories support female inferiority, Spong argues they show how “God can raise up holiness out of any human distortion.”

The lecture will analyze the gospel from its written origin, which Spong argues is entirely Jewish. He claims the text was written by Jews and later interpreted incorrectly by Christians. As the first section of the Bible to reference the virgin birth of Jesus, Spong argues a Jewish, and non-literal, perspective will greatly change the way people interpret the event.

As a previous lecturer, Spong is excited his next week in Chautauqua Institution has begun. Outside of his lectures, he looks
forward to attending Sunday worship services, daily lectures and engaging with the community.

“It’s the most intellectually stimulating experience I ever have,” Spong said. “What you do at Chautauqua is you integrate a lot of things from a lot of different perspectives, and it’s really fascinating.”