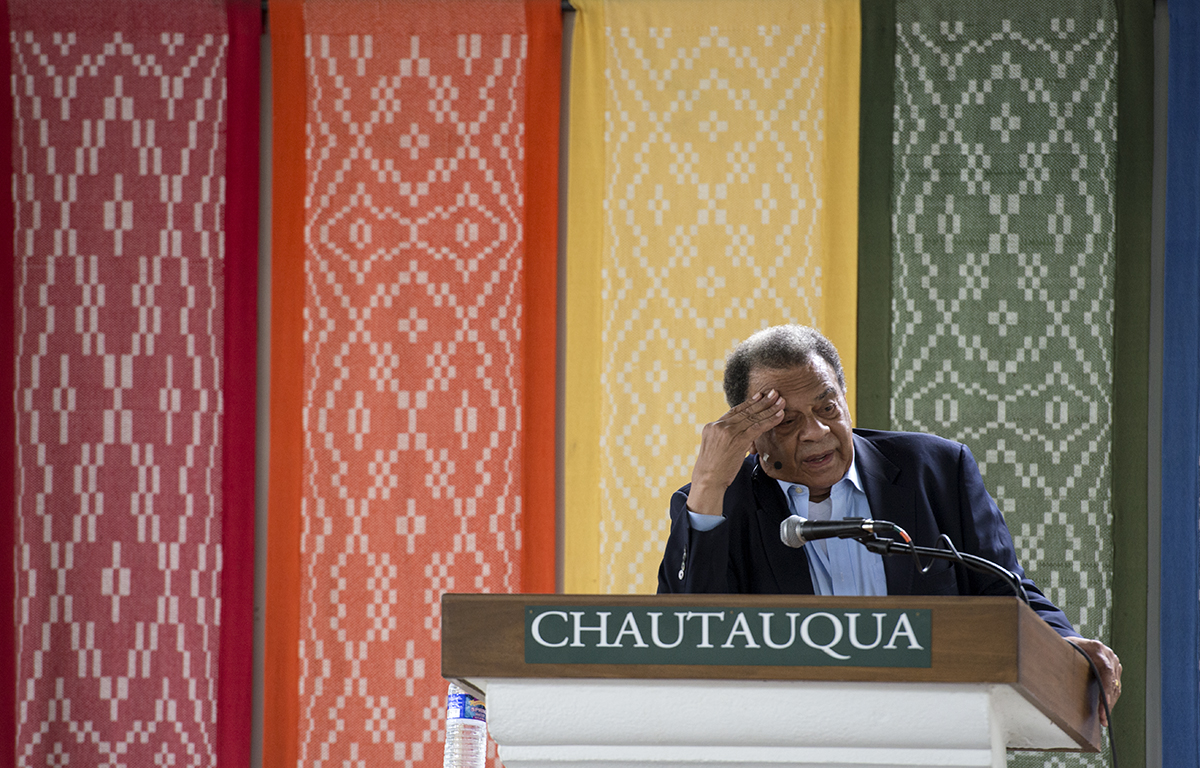 The answer to the Black Lives Matter movement, civil rights icon Andrew Young believes, is for black people to move back to the South.

A day before coming to Chautauqua Institution, as Atlantans took the streets for the fifth straight day to protests the deaths of two black men, Alton Sterling and Philando Castile, at the hands of white cops, Young told Atlanta police the protesters were “unlovable little brats.”

At the Interfaith Lecture in the Hall of Philosophy Monday afternoon, Young continued his criticism of Black Lives Matter movement, calling its members emotional, misguided and doomed to fail, their grievances exacerbated by ratings-happy journalists and the 24-hour news cycle.

A former ambassador to the United Nations and mayor of Atlanta, he warned of a world sinking into economic chaos and offered a broad range of solutions, from employing Israeli- and Cuban-style aquaponics in the American South to help feed a rapidly growing India, to creating an enterprise zone in the Mississippi Valley that will attract private money from offshore accounts and rebuild the infrastructure of the nation’s geographic capital.

“I just don’t think you can solve [BLM’s grievances] in the big cities in the North,” Young said. “So I want people to come back south. Not that we shouldn’t work on the North, but as there begins to be some relief to the pressure, that’ll take place.”

Some of Young’s grievances with the movement rested in their tactics. In Atlanta, protesters blocked a highway and Young said he feared a truck would be unable to stop and kill them. Protesters also blocked major roadways in Baton Rouge and Dallas over the weekend, and before that, in San Francisco and Los Angeles, among other major cities. No casualties have yet been reported, although last January emergency services in Boston said protesters obstructing a highway endangered lives by blocking ambulances.

“It looks like we’re depriving them of the opportunity to be militant,” Young said. “But the truth is that there are certain rules of order that we have to abide by to survive.”

Young, a friend and colleague of Martin Luther King Jr., is not the first 1960s racial justice leader to oppose what others have called the modern civil rights movement. Last August, Barbara Reynolds published an op-ed in The Washington Post applauding the movement’s cause but deploring their tactics and exclusive focus on black people. Others, such as Rep. John Lewis, D-Ga. have praised the movement.

Young said his skepticism of BLM — and all militant movements — grew out of the unique role King assigned him in the civil rights movement. He recalled King sitting him down after a group argument and telling Young that he has to take a position far enough on the right so that King can sound like the rational voice between Young and the more radical members of the movement.

“I said, ‘You’re making me the institutional Uncle Tom,’ ” Young said. “And [King] said ‘Exactly, and I’d rather you do that than me get killed for nothing.’ … From that time on, I have my instructions to be as cold and critical and calculating and insensitive as I need to be to make things rational.”

Young’s conviction that blacks should move back to the South arose both out of his frustrations with the movement and with the world economy. Young split the last seven centuries into two periods. From 1440, when the printing press was invented, until 1944, when Allied leaders set up the Bretton Woods financial system, the world was incredibly chaotic.

That system brought an equilibrium with it, but President Richard Nixon destabilized it again when he took the U.S. off the gold standard in 1971, and rapidly evolving technology will only make things worse.

“There is a going to be a serious confusion in our lifetime,” Young said. “A place like Chautauqua is important because it will remind us we may not know what the future may hold, we’re here because we know who holds the future — God.”

The precise idea to move south came after his trip back to Selma for the 50th anniversary of the Montgomery to Selma marches, Young said. He said although the children and grandchildren of his generation benefitted from desegregation, many of his generation who sacrificed for the Voting Rights Act remained in the rural South, old and impoverished.

Young said black people should come south and rebuild those small towns. Recalling days sitting on his grandmother’s porch, he said such a move would help rebuild the family structures that he argued have been lost in the North. Whereas unemployed youth in Ferguson, Missouri, and other northern cities confront law enforcement, Young said, in the South, many of those 1960s racial justice protesters are now councilmembers or police chiefs.

“There is a level of comfort and integration and stability in the small towns of the South, particularly, I think we desperately need,” Young said.

Evidence of segregation levels in small-towns is mixed. Although in May a judge ordered a Mississippi town of 12,000 to desegregate and a 2007 study found small towns nationwide are about equally as segregated as cities, a 2008 report from The Civil Rights Project found small southern towns are leading nation in desegregation.

In the South, Young said, those new farmers could use aquaponics — essentially growing fish and plants together in a high-tech and efficient aquatic environment — to grow protein-rich duckweed and other crops to revive southern agriculture.

The technology can allow crops to be planted vertically, exponentially increasing yield per square acre. Milwaukee, parts of Texas and Young’s own Atlanta, among other areas, have embraced the method as an economic boon and a method of feeding a rapidly growing world.

Young specifically named India as one of the main markets for a potential American aquaponics system. India is projected to surpass China in population in 2022, but two years of drought have left the country with a severe shortage of protein-rich legumes.

Protein-rich plants are important in India, Young said, because so many Indians are vegetarian (a 2007 UN FAO report found India consumed the fewest kilograms of meat per capita of any count). With fewer legumes and more people, they will need the protein-rich duckweed American aquaponic systems can produce.

Drawing from his time as mayor of Atlanta, when he drew $70 billion in private investment, attracted 1,100 businesses, created 1 million new jobs and, he said, attracted 2,200 German businesses to the small city from 1982 to 1990, Young urged the United States to follow his lead and build enterprise zones — districts where the government offers tax exemptions or other incentives to encourage business growth — in the Mississippi Valley.

The area has been neglected, Young said, and with the good ideas and forward-thinking youth of today, the valley can be transformed.

“All we need is leadership and an agreement to come together for the future of [the] U.S.,” Young said. “It will then be a matter of all lives matter because all lives are eating.”