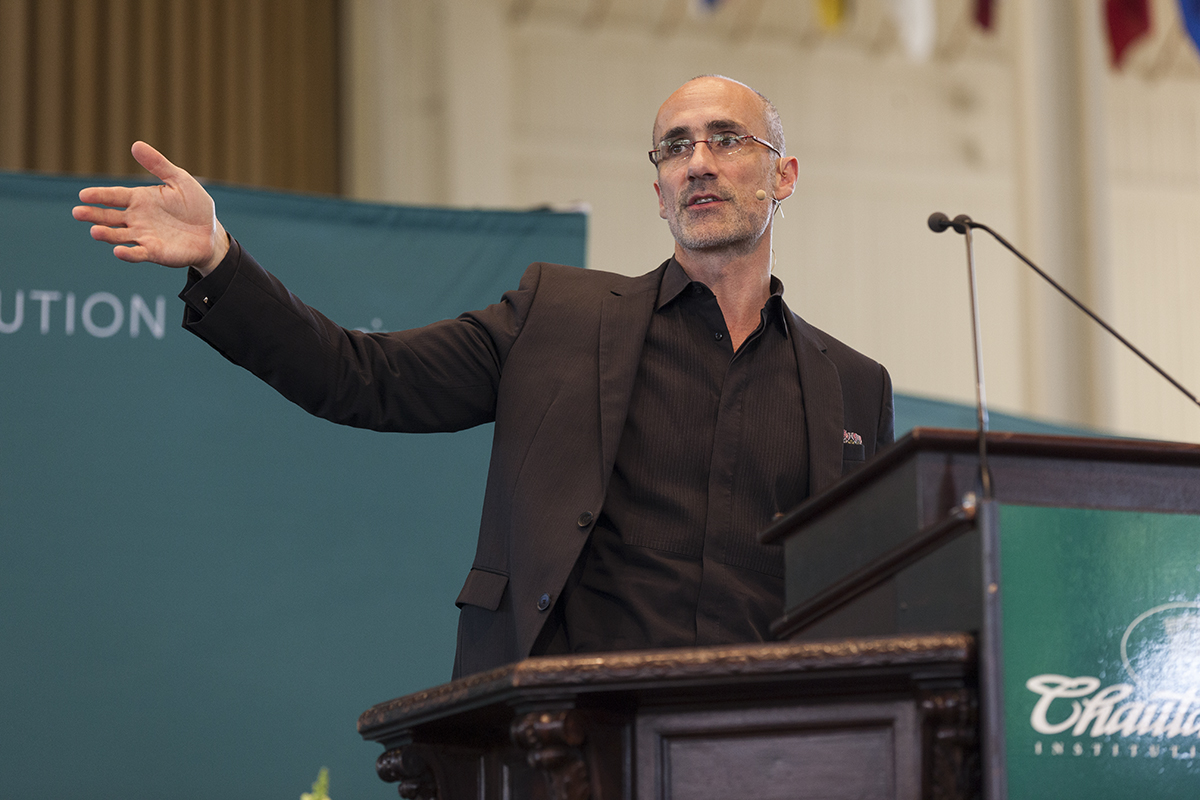 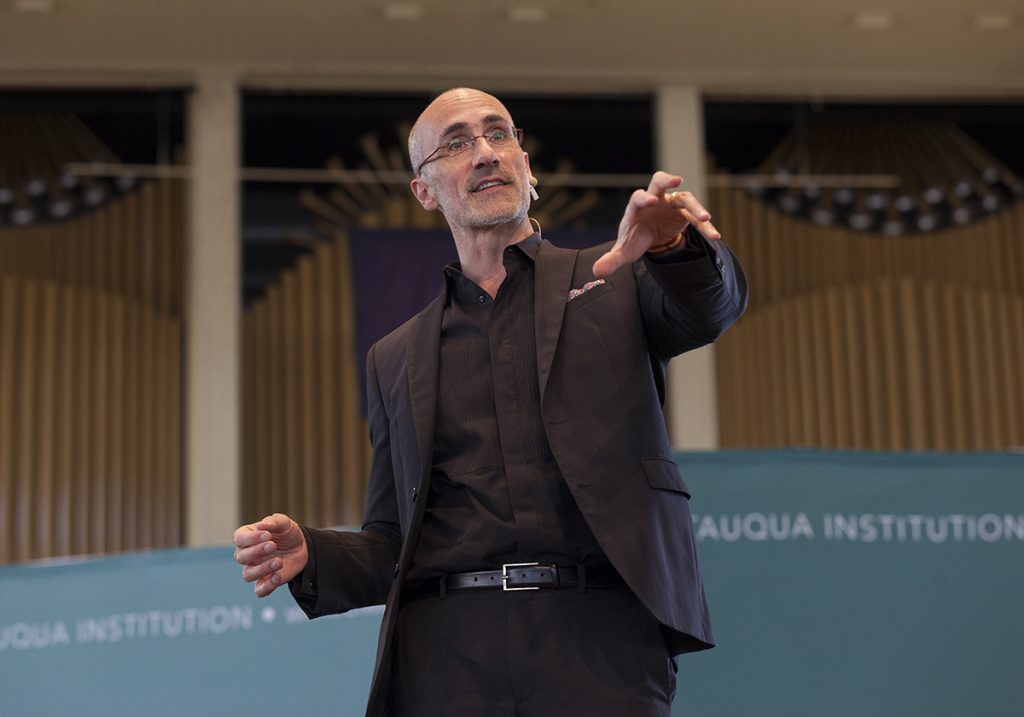 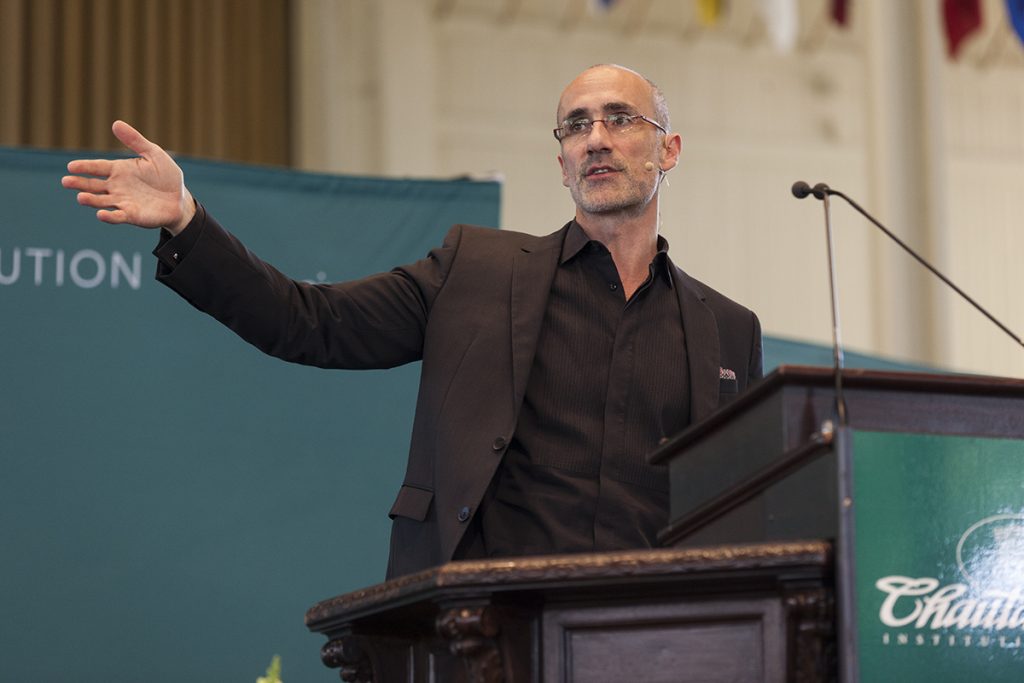 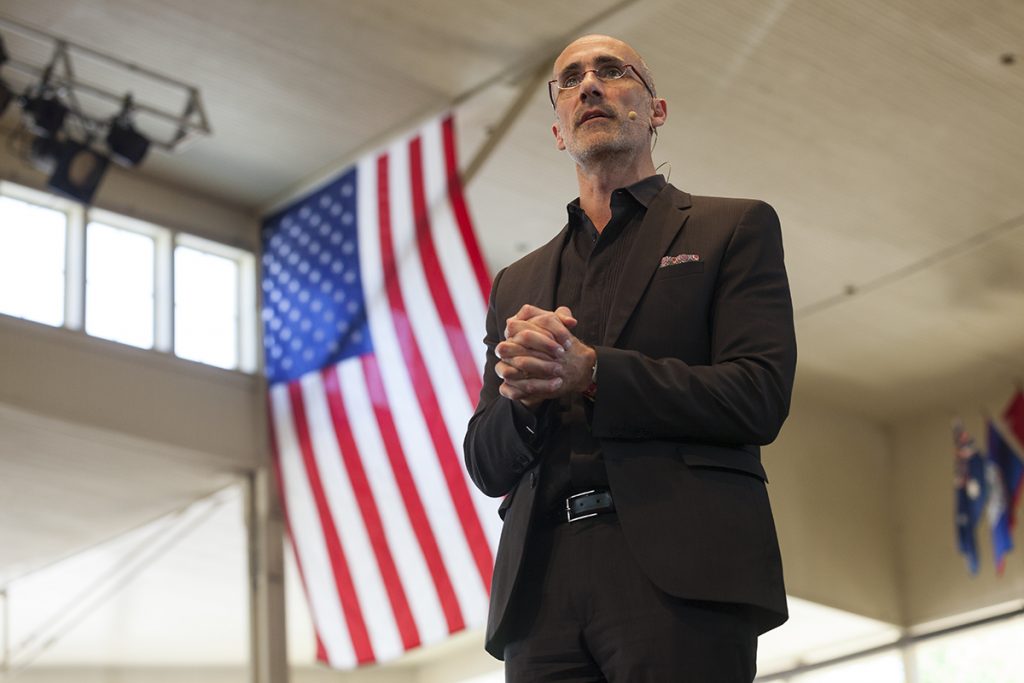 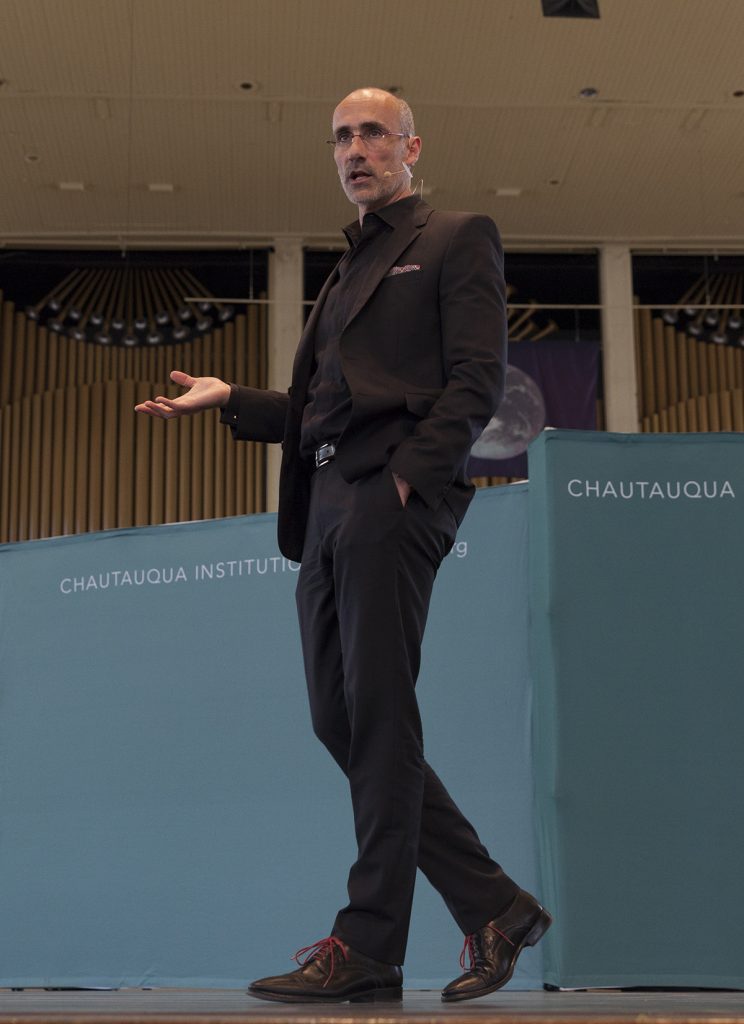 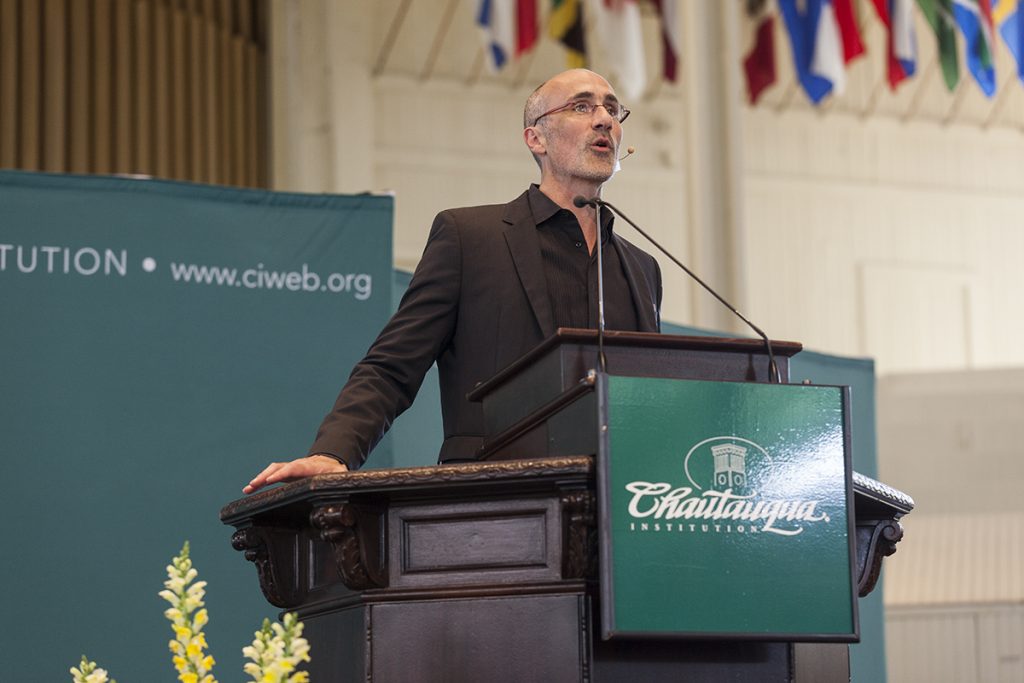 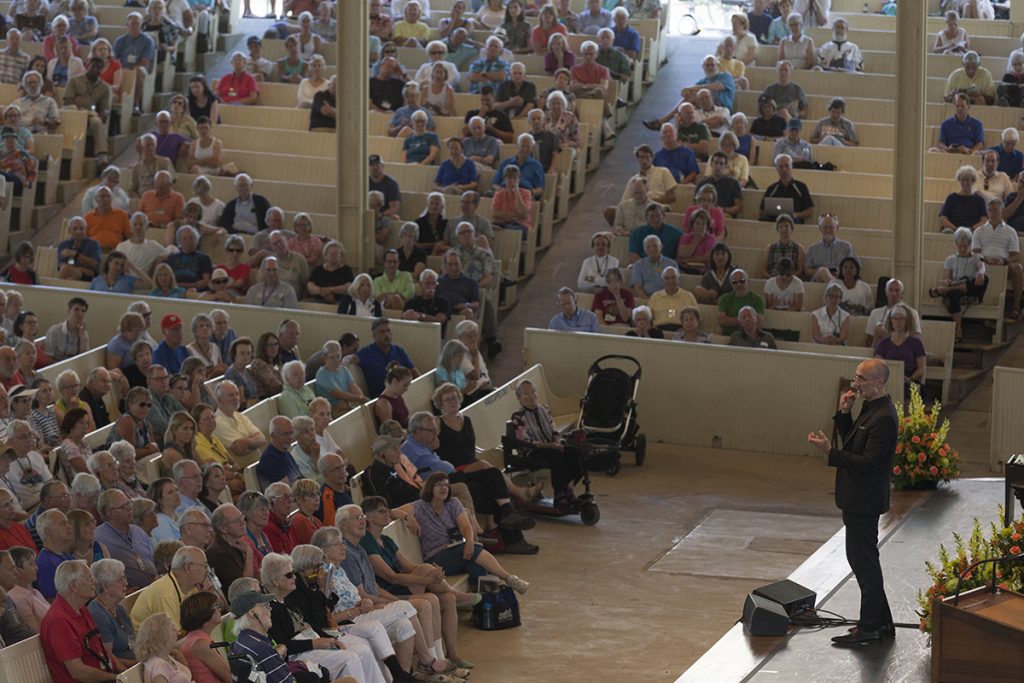 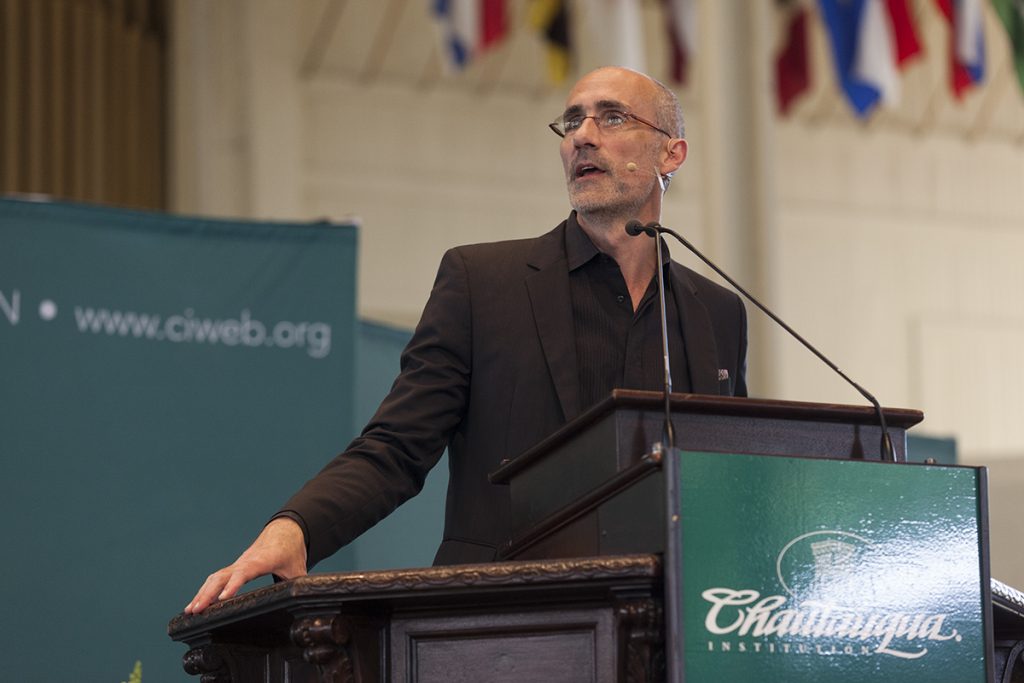 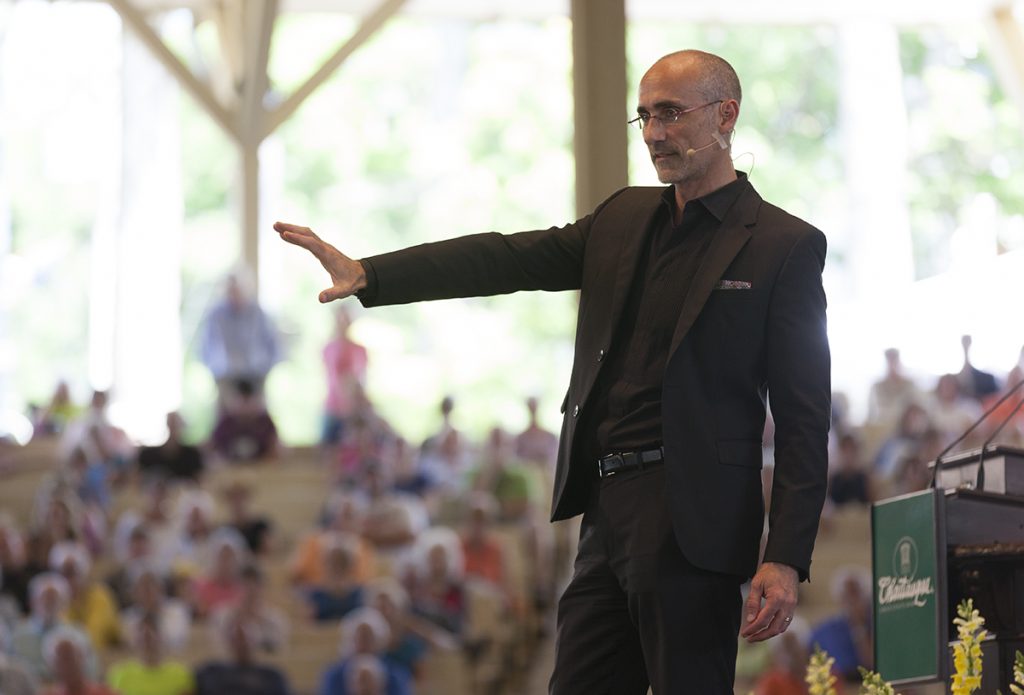 America’s free enterprise system is great for the poor and dangerous for everyone else, according to Arthur C. Brooks, president of the American Enterprise Institute.

Brooks discussed how he entered the world of economics, the disadvantages of capitalism and the key to living a happy life during the Tuesday morning lecture in the Amphitheater during a week on “Moral Leadership in Action.”

Brooks discovered he wanted to learn more about economics after traveling around the world as a professional French hornist playing for the City Orchestra of Barcelona, Spain. Brooks ran across a Johann Sebastian Bach biography; in it, the writer asked Bach why he composed music.

Bach responded he composed for the “glorification of God and the enjoyment of man,” Brooks said. In that moment, Brooks realized his answer could not match Bach’s.

When Brooks dropped out of college at 19, he had no intention of returning to school, but as he searched to find a career where he could answer the “why” to his choice, he found himself taking night classes and teaching music during the day.

Brooks said he found his answer through studying the “dismal science” of economics. At a young age Brooks wondered how people could stop being poor. That question entered his mind after seeing a picture of a young boy in east Africa. The boy had flies on his face and a protruding belly from malnutrition.

“He was going to die, and there was nothing we could do about it,” Brooks said. “The world wasn’t right, and it had a big influence on me.”

Years later, Brooks would think of the boy again and wonder what happened to him and his family. When Brooks began studying economics, he said he found an answer: Throughout Brooks’ life, the percentage of the world’s population living at starvation levels declined by 80 percent.

“That is a miracle, my friends,” Brooks said. “That is the greatest anti-poverty achievement in the history of mankind, and it happened in the lifetime of virtually everybody in this beautiful place.”

Two billion people were brought out of poverty, and all Brooks could think about was how to reach the next 2 billion.

“It was the American enterprise system that started to spread around the world after 1970,” Brooks said. “When I saw that kid, he saw me. When I said, ‘It’s a pity,’ he said, ‘I want that freedom.’ ”

Brooks became an apostle for the free enterprise system and a professor at Syracuse University. However, he said he encountered a recurring problem among the college students he taught — a capitalist system pushed the idea of work and money onto students, which, to them, could not be the key to happiness.

A study in Rochester, New York, by two psychologists at Rochester University surveyed 150 graduating seniors and their goals were for the next five years. The study found two types of goals: exogenous (money, power and success), and endogenous (love, relationships and people).

After five years, Brooks said the study found every student reached their goals whether the goals were exogenous or endogenous. However, those with endogenous goals were found to be happier.

“If you let the capitalist system throw you under the hamster wheel, you’re going to end up miserable,” Brooks said. “That’s basically what that study shows me.”

Brooks said a friend of his told him to speak to an Indian swami about capitalism. This swami grew up in Texas before returning to India. In America, the swami excelled in his academics and was making more money than his father by the age of 21.

The swami woke up on his 26th birthday and wondered if working and money was all there is to life. After praying for six months, the swami sold all of his possessions, gave away his money to the poor and moved to India to become a monk.

To Brooks’ surprise, the swami said, “[Capitalism] is great. It’s the only system in history that’s pulled my people by the hundreds of millions out of the worst poverty imaginable.”

Brooks said the swami did not believe money is bad for the soul, but attachment to money is, which introduced Brooks’ point at the beginning of his talk — capitalism is good for the poor and dangerous for everyone else.

“The problem is people have an emotional relationship with their stuff, and that’s what holds them down,” Brooks said. “Be rich; be poor, but don’t be attached.”

Brooks found the key to happiness to be “abundance without attachment.” He said his mother taught him at a young age not to love stuff, but as he grew up, he forgot that lesson.

“There is a message that you’re being bombarded with: Love things, use people,” Brooks said. “That’s what the world tells you, and do you know what the real formula for happiness is? Use things, love people. It’s exactly the opposite, and, if you forget that, you become attached.”

Brooks challenged Chautauquans to take two steps toward happiness, promising it would make individuals happier before dinner. The first, give away something they’re personally attached to. The second, stop investing in exogenous things.

Brooks used an example of when he had an argument with his wife over what to do for their first wedding anniversary. The couple could buy a couch or go to the beach.

Brooks said they decided to go to the beach and bought a couch a few months later. Today, Brooks cannot remember the color of the couch or where it sat in their small apartment or if it was soft or hard. He does, however, remember every detail of the vacation he spent with his wife for their anniversary.

“You think that material stuff lasts forever — you’re wrong,” Brooks said. “You think that endogenous experiences with people that you love are evanescent, and they’ll go away. You’re wrong. You want something permanent? Wrap it in love, and do it together.”