Growing up, David Korten always planned on taking over his family’s music and appliance retail business. It wasn’t until his senior year at Stanford University when he took a course on modern revolution that Korten changed his mind. 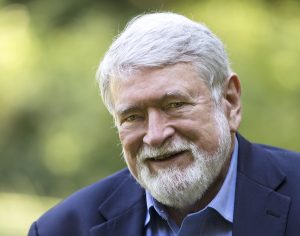 Korten became concerned yet fascinated with the process of development that causes communist revolutions. He said when he learned they are typically a response to poverty, he was prompted to learn more about global economies and decided to attend graduate business school. Korten is now president of the Living Economies Forum, an organization that works to initiate a new world economy that focuses on positive, community living through self-organization.

At 2 p.m. Wednesday in the Hall of Philosophy, Korten will give a lecture titled “Change the Story, Change the Future,” named for a book he recently published with the same title.

Part of the lecture series theme “Money and Power Through a Spiritual and Ethical Lens,” Korten’s lecture will explain how humans base reality upon the framing of cultural stories, and that the current story humans validate causes economic and environmental corruption. Korten will explain his belief that an economy focused on life and community, rather than money, will help combat corporate globalization and create a better world.

After receiving his master’s in business administration and Ph.D from the Stanford University Graduate School of Business, Korten worked as an international development professional, dedicating his time to setting up business schools in low-income countries such as Ethiopia. He later worked at the Harvard Business School as an associate professor teaching middle management, M.B.A. and doctoral programs. During that time he also served as the Harvard Business School adviser to the Nicaragua-based Central American Institute of Business Administration, and led a family planning program project for the Harvard Institute for International Development.

Korten’s focus on education stemmed from his belief that people throughout the world need to gain new knowledge of economics and basic legal system structures in order to work toward a radical redistribution of wealth and ownership. He said the process of bringing humanity into balance with the planet starts out with a “new story.”

Korten said humans as a species are in deep trouble, because we are consuming at 1.6 times what Earth can sustain. The world’s 62 richest people own as much wealth than the poorest half of humanity, or 3.5 billion people. He believes that framing a new story for humanity requires first accepting that the current story justifies bad economic and environmental practices.

“Those are two extreme imbalances,” Korten said. “Species live in relation to the living systems by which Earth sustains its capacity to support life, and we have this extreme inequality which results in the extreme corruption of our political system and its control.”

In addition to working as president of the Living Economies Forum, Korten currently serves as the co-founder and board chair of YES! Magazine, co-chair of the New Economy Working Group, an associate fellow of the Institute for Policy Studies and a member of the Club of Rome. He is a well-known author of several books, including a popular anti-globalization book called When Corporations Rule the World.

In today’s lecture, Korten will discuss ideas from his most recent book published in January: Change the Story, Change the Future: A Living Economy for a Living Earth; the lecture will focus on the role money and spirituality play in writing a new story for humanity.

Korten said humans currently organize around a morally and intellectually corrupt economic ideology, which assumes money is real wealth when it is actually a powerless number. He believes people need to connect their moral and spiritual goals with those of economics and science.

“We must now learn to live in community with the rest of Earth’s community of life,” Korten said. “We need to draw on our deepest religious traditions, particularly the mystical traditions and our understanding of spirit and consciousness, but bring that together with our understanding from science of nature, the structure of matter and how physical matter evolved.”

Column: “Jesus Laments Widow Who Gave All She Had”