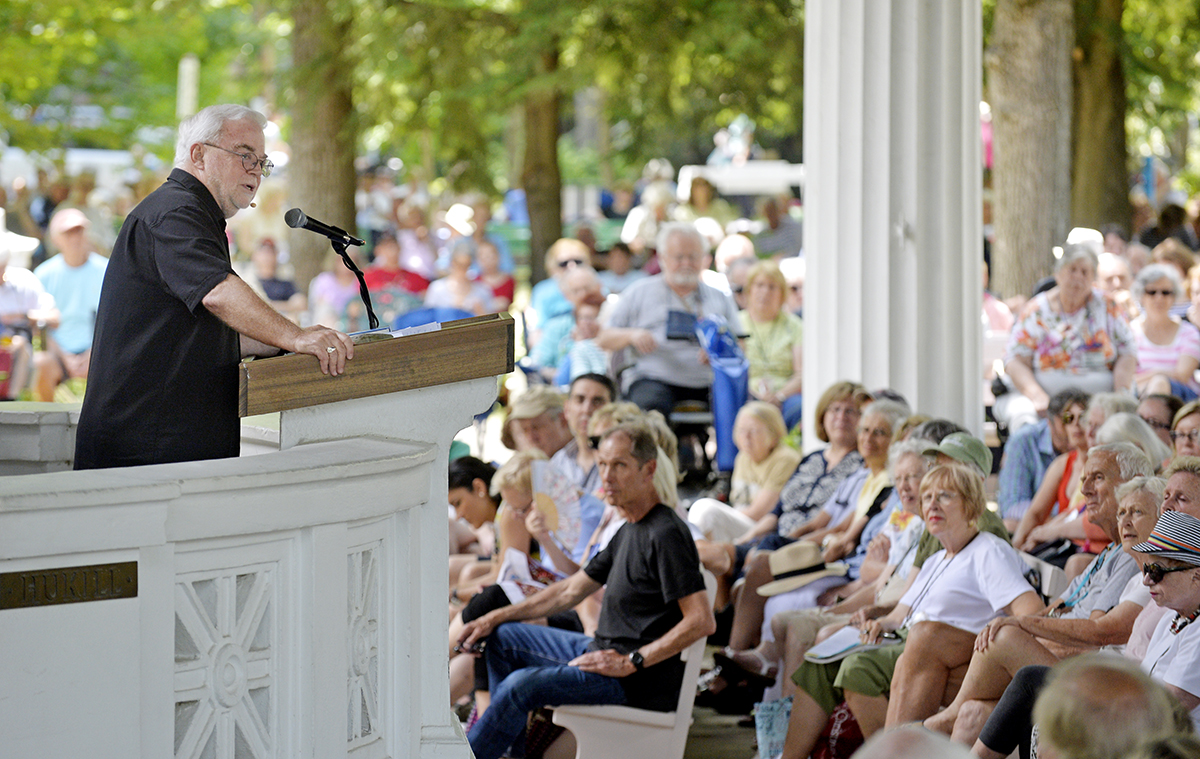 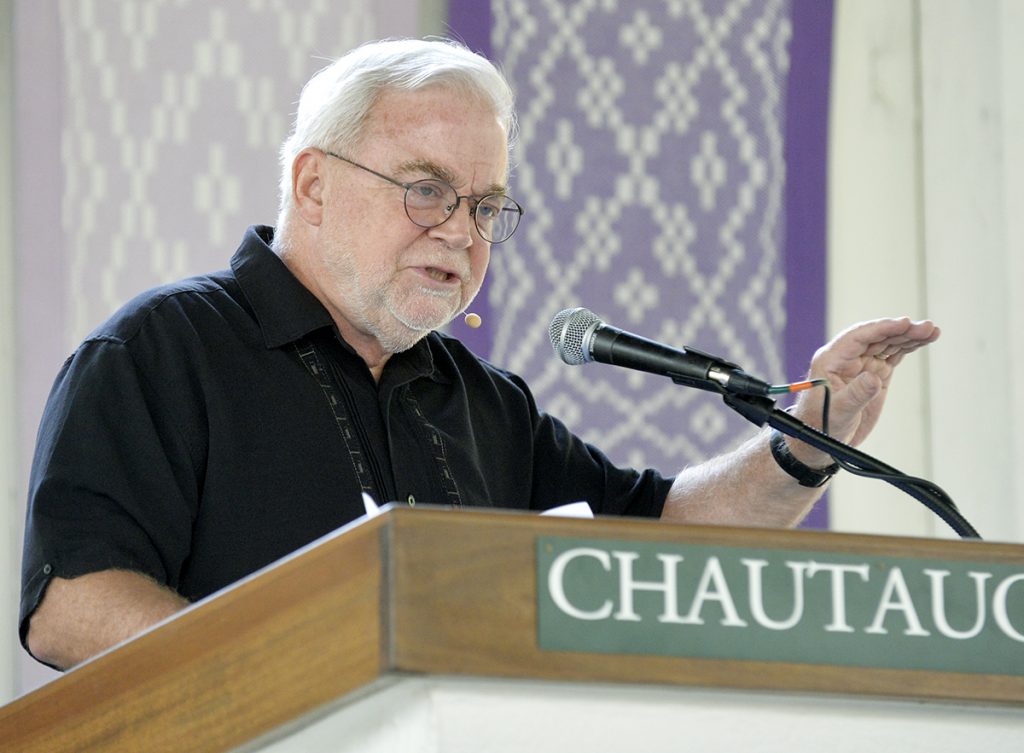 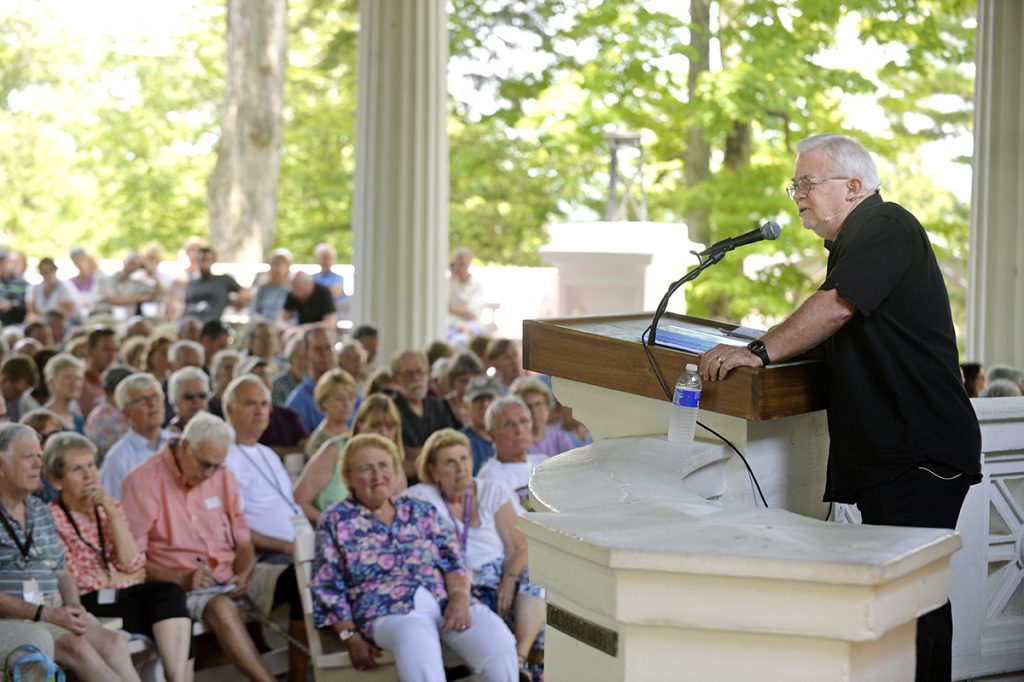 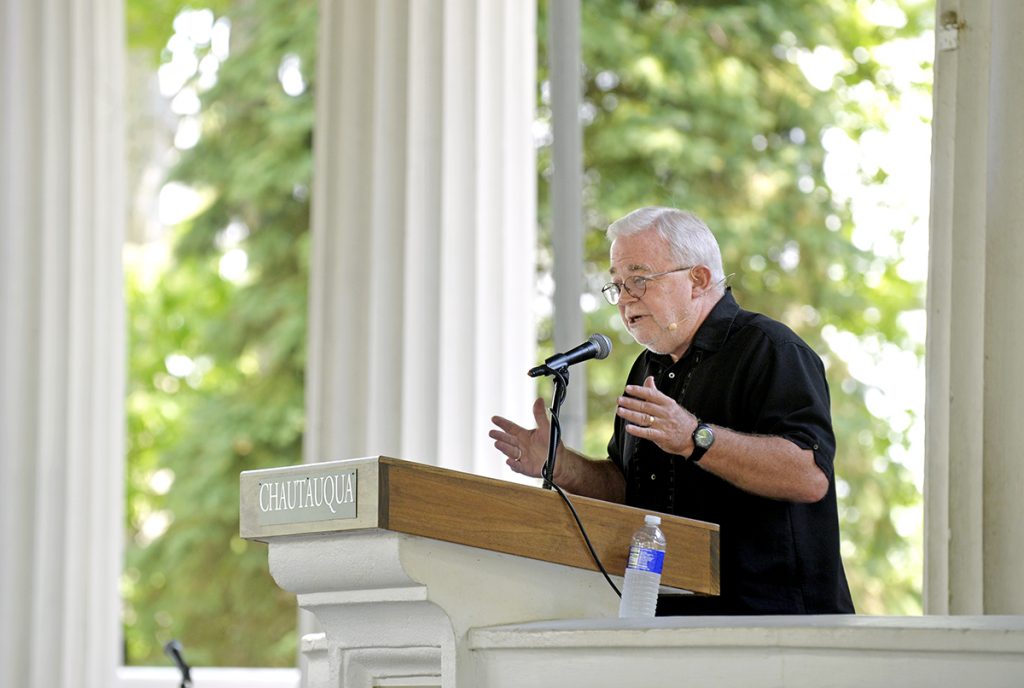 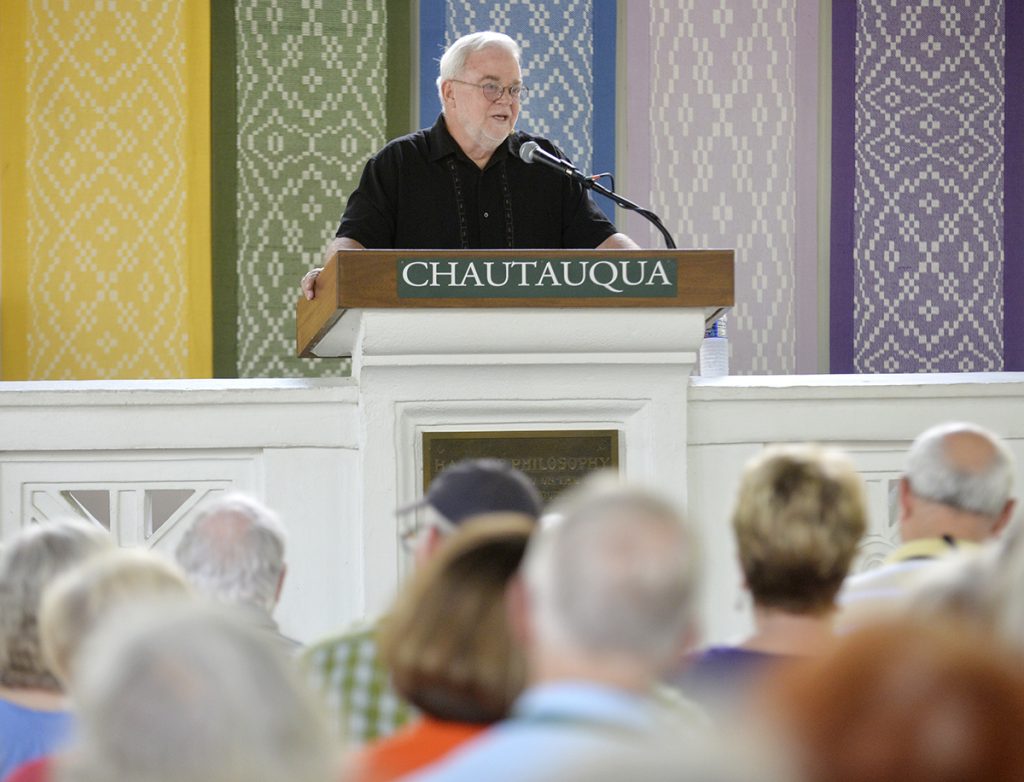 Jim Wallis started writing his latest book when he learned of the death of the Trayvon Martin, and imagined his own son Luke — white, 6 feet tall, 18 and set to play college baseball the next year — in Martin’s shoes.

“We all know that had Luke been in Sanford, Florida, same time, same place as Martin, doing all the same things, everything — even wearing a hoodie — he would have come back to me in joy,” Wallis said. “Trayvon didn’t come back to his mom and dad and he isn’t going to college next year.”

Two days after civil rights icon Andrew Young denounced Black Lives Matter, Wallis, a veteran of the same movement and the New Left, praised BLM as necessary to help confront four centuries of racism, slavery and genocide. Speaking from the Interfaith Lecture platform Wednesday in the Hall of Philosophy, Wallis quoted author Ta-Nehisi Coates and called for Chautauquans and others of European ancestry to throw off the myth of whiteness — a lie he said was invented to justify slavery and racism — and push against injustice, both in their homes and with their elected officials.

Wallis’ latest book is called America’s Original Sin: Racism, White Privilege, and the Bridge to a New America. That original sin is not simply slavery, an idea that Wallis said can exonerate white folks who say that their people didn’t hold slaves or came to the U.S. after slavery. Rather, the sin is what Americans did to justify slavery, Wallis said.

Christians realized they could not commit genocide against Native Americans or kidnap and enslave Africans if they were created in God’s image, Wallis said. So they made them less than a person in popular imagination and cemented it in the nation’s founding documents, Wallis said, ruling that blacks were to be considered three-fifths of a person.

Wallis said that legacy remains today. He said he spoke to an African-American kid in Ferguson last year who told him, “I still feel like I’m treated like three-fifths of a person.”

“So Black Lives Matter is not just a hopeful, political movement of young people, which it is,” Wallis said. “It is a theological statement that cuts right to the heart of the founding principle of this nation, which was that indigenous and black lives don’t matter.”

Sin requires repentance, and yet Wallis said the standard reaction whites have to white privilege and racism is shame or guilt. Wallis said in the Abrahamic traditions, repentance requires action, not just feeling. People have to literally turn back and go in a whole new direction, Wallis said.

Second, he urged white parents to give a parallel version of “The Talk” that black parents give to their kids. Where black parents warn kids to always be cooperative and deferential to police, white parents should tell their kids that their black schoolmates or teammates can be arrested and shot and killed simply because of their skin color.

“I can hear parents saying [to me] ‘but that would make them feel uncomfortable,’ ” Wallis said. “Yes, it would, and that’s the point.”

Drawing from his own experience, Wallis argued that such injustice will anger kids and perhaps affect change in the future. He recalls speaking to a diverse class of fifth-graders. He told them about the 11 million undocumented immigrants in the U.S. and how the current system makes them live in fear of losing their families. They were angry, Wallis said, and demanded to know why Congress hasn’t done anything. The answer Wallis gave was that they were afraid of that class of largely non-white kids.

By 2035, America will be a majority-minority nation for the first time in its history. Underlying most of American politics today is what Wallis, quoting a priest from North Carolina, called “Master James Crow, Esq.”

“He’s wearing a suit and tie — he’s not wearing sheets and hood and all that,” Wallis said. “He’s in politics in North Carolina, he’s in economic institutions, he’s with his friends and he’s saying we cannot prevent the changing demographics in America, but we can block this, delay this from changing our nation for a long time.”

Wallis said James Crow Esq. manifests itself in the 17 states that have adopted voter ID laws that keep out minorities, low-income and less-educated people; in racial gerrymandering that creates largely white and conservative districts; and in mass incarceration.

Wallis said a year and a half ago, congressional leaders promised a vote on an immigration reform bill that a majority of Democrats, Republicans and even white evangelicals supported. But fearing a challenge in their gerrymandered district, Republican leaders barred the bill from coming to the floor. Mass incarceration, meanwhile has imprisoned millions and left more than 2.2 million blacks ineligible to vote, according to The Sentencing Project.

Whites can combat racism by pushing against those three policies, Wallis said.

Finally, he encouraged people to have a second “Talk,” this one with the police. He told them to go with black clergy to their police chief with a list of proposed reforms from Campaign Zero, an initiative within the Black Lives Matter movement, and demand that they do something about it. The reforms, Wallis said, can help save both blue lives and black lives.

Wallis finished with quotes from Isaiah and the Gospels that by helping social justice, people can embetter themselves.

“If you offer your food to the hungry and satisfy the needs of the afflicted, then your light shall rise in the darkness and your gloom will be like the noonday,” Wallis said, quoting Isaiah 58. “The Lord shall guide you continually and satisfy your needs in parched places.”