Morning Worship Column: Boyle Ends Week as Chaplain with Reminder to Find Kinship with Each Other 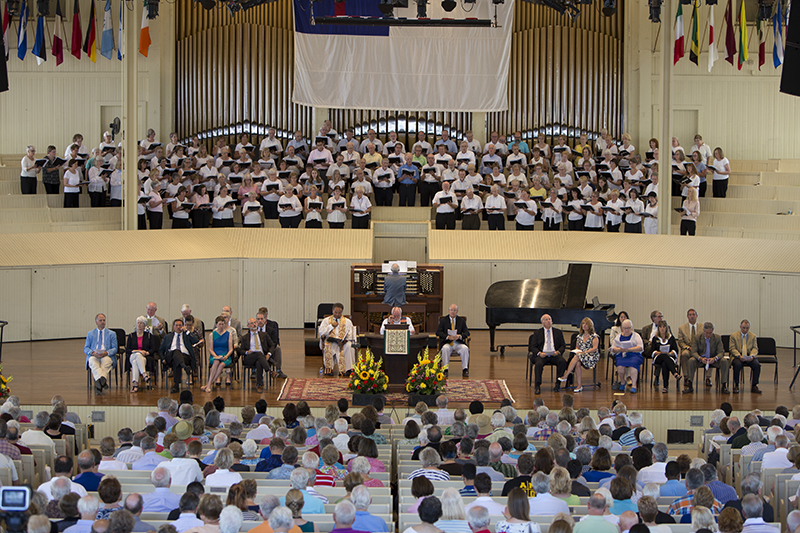 “Hey G, give me a bless, yeah,” is the way homeboys and homegirls ask Fr. Greg Boyle, S.J., for a blessing. Boyle completed his week as Chautauqua’s chaplain at the 9:15 a.m. Friday morning worship service in the Amphitheater. His sermon title was “The Praise that Matters to God,” and the Scripture was John 4:21-24.

“Eric is an orphan who has a special place in my heart,” Boyle said. “He operates in two modes. First, he is always asking for money and not in a nice way. I am a priest he has mistaken for an ATM. Second, he is always complaining, about his supervisor, about his social worker, about something.”

Eric asked for a blessing and as he was putting his hands on Eric’s shoulders, Boyle remembered that Eric’s birthday had been the day before. Boyle said to him, “I am glad you were born. The world is a better place because you are here. I am a rich man because of you, and I am proud you are my son. Even though at times you can be a huge pain in the ass.” Eric replied, “The feeling’s mutual.”

It is God’s passion that we find kinship with each other, Boyle told the congregation. God has a vision of Chautauqua and of the Gospel, and God loves without measure or regret. The prophet Habakkuk said, “For there is still a vision for the appointed time; it speaks of the end, and does not lie. If it seem to tarry, wait for it; it will surely come, it will not delay.”

“Vision is God’s dream coming true. Mother Theresa said our problem is that we have forgotten that we belong to each other,” Boyle said.

In an interview with the Christian Broadcasting Network, Boyle talked about the litany of work that goes on at Homeboy Industries.

“The interviewer made a face and said, ‘Yeah, but how much time do you spend praising God?’ I said, ‘Every damn day!’ She made a face,” Boyle said.

In the Scripture for the day, Boyle said, there are eight mentions of worship.

“We worship in spirit and in truth and [the Scripture] begs the question, what praise matters to God? We often settle for the praise we would like if we were God, praise that is exalted not exhausted,” Boyle said. “We should join hands, not wave hands. We need to move quickly to be God’s compassion, to sing the song without words together.”

Boyle said the early Christians greeted each other with a kiss on the lips to move the circle of compassion beyond the blood family so that no one was outside.

William, called Duke at Homeboy, was shot on Christmas Eve and Boyle went to visit him on Christmas Day. “What did you bring me for Christmas?” Duke asked. “Not a damn thing. You got God’s gift, a second chance at life,” Boyle said.

“Oh, yeah. The doctor said the bullet destroyed one-quarter of my lungs. That is almost half,” Duke said. Boyle said he congratulated Duke on his knowledge of fractions and then Duke said, “Who did you come to see today?” “You,” Boyle said. “No,” Duke said. “Yes,” Boyle said.

Martin Luther King Jr. often talked about the least, the lost and the last, Boyle said.

“We include them no matter how startled they or the world are. That is the praise that matters. The Quran says that we are created in diverse tribes to find our way to each other,” Boyl said.

Homegirls Cafe features “waitresses with attitude.” A lot of celebrities have stopped by for lunch. Diane Keaton came in one day and was waited on by Glenda. Keaton asked what Glenda would recommend and after Glenda rattled off some choices, Keaton chose her lunch. Glenda said, “Wait a minute. I know you from somewhere.” Keaton, Boyle said, started to say something about having “one of those faces that seems familiar” when Glenda interrupted and said, “We were locked up together.”

“It took my breath away. Kinship was set up so quickly and that is exactly what God had in mind, finding our way to each other,” Boyle said. “We can be astonished that Jesus told us to love our enemies or we can just love our enemies and astonish the world and jostle it from its course.”

When Boyle is invited to speak, he often takes two homies from rival gangs with him. Most of them have never flown before and “I get a thrill watching them panic,” he said. He was invited to his alma mater, Gonzaga University, and took Bobby and Mario with him. They were flying out of the Burbank, California, airport where passengers have to go out on the tarmac and up stairs to board the plane.

Mario was afraid to fly and was panicky even before getting on the plane. He asked when they were going to board the plane and Boyle pointed to two attendants going up the stairs with large cups of Starbucks coffee and said, “As soon as the pilots sober up.”

Boyle had never been in public with Mario before and people stood aside as they looked at one of the most tattooed men at Homeboy.

“It was interesting to watch because Mario is one of the kindest, most gentle people,” Boyle said. “He did not just thank the attendant for the snack, he grabbed her hand, looked her in the eye and said, ‘Thank you so much.’ ”

The university had scheduled one talk in the evening and lots of smaller presentations during the day. “I told Bobby and Mario to get up and tell their stories. They told stories of terror, torture and abandonment so hot, if they had been flames, you would have to keep your distance because you would be scorched,” Boyle said. He gave them each five minutes before his main talk to tell their stories so people could ask them questions during the question period.

A woman stood up and asked Mario, the father of a son and daughter, what wisdom would he give them. Mario started to say, “I just” and stopped. He was crying and finally said, “I just don’t want them to turn out like me.” Crying, the woman who asked the question stood back up and said, “Why wouldn’t you? You are kind, loving, thoughtful and wise. I hope they turn out just like you.” The audience stood and could not stop clapping.

“Mario was overwhelmed — he was returned to himself and he returned them to themselves. This is the only praise God has any interest in,” Boyle said. “We have to fight against forgetting that we belong to each other. We are diverse tribes trying to find our way to each other. We are singing the song without words together. We are never stopping. The vision has time; if it delays, wait for it. God bless you, Chautauqua.”

Father James Hubbard presided. Alison Griffith read the Scripture in English and German. Griffith is a scholarship student with the International Order of the King’s Daughters and Sons, from Toronto and studies at Carleton University. During the daily prayers, the members of the New Clergy Conference offered prayers for those killed in Ankara and for all who have suffered violence and prayed for a world of peace where all acknowledge they are children of God. The Motet Choir sang “Give Me Jesus,” arranged by Mark Patterson. The choir was accompanied by saxophonist George Wolfe and Jared Jacobsen, organist and coordinator of worship and sacred music. The Alison and Craig Marthinsen Endowment for the Department of Religion supported this week’s services.