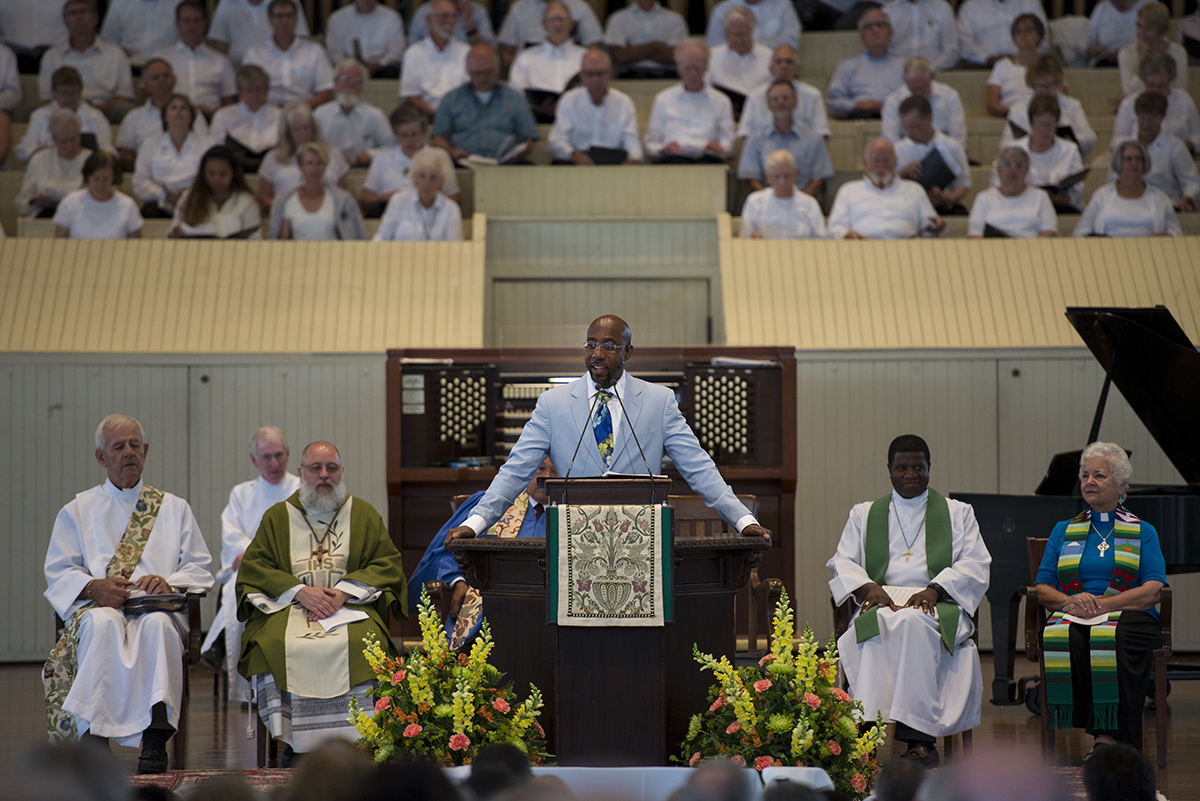 “This is a serious moment in America. Eric Garner had the life choked out of him for selling some loose cigarettes but not one banker, [after bankers] almost took our whole economy over the cliff, went to prison. Twelve-year-old Tamir Rice was treated like a wanton criminal and Philando Castile had been stopped by the police 52 times in the last 14 years,” said the Rev. Raphael Warnock during the 10:45 a.m. Sunday morning worship in the Amphitheater.

“A peaceful protest was disrupted by a deranged gunman, and Lorne Ahrens, Michael Krol, Michael J. Smith, Brent Thompson and Patrick Zamarripa lost their lives not because they were bad, but because they were blue,” he said. “God is trying to speak to us. God did not cause this tragedy, but God is saying we have to learn to feed one another.”

Warnock’s sermon title was “Knowing When to Give the Benediction,” and the Scripture readings were 2 Corinthians 9:8-15 and Mark 6:30-44. The Gospel reading was the feeding of the 5,000. Of all the miracles Jesus performed, this one is the only one recorded in all four Gospels.

“Each writer wrote about it in his own way, but that fact alone suggests its prominence, pervasiveness and power in the oral tradition,” he said. “It appealed to the mind and imagination of the early church.”

That story shows a balanced understanding of who Jesus was and what he was about and what we should be about, Warnock said.

The disciples were struggling, he said. They had been out doing good works and were sharing with Jesus all they had done. They went to a deserted place but the crowds got there ahead of them. They had heard about Jesus and needed to hear him.

“After a week like this, we need to hear a Gospel that has world-changing, life-changing power,” Warnock said.

Jesus was tired but began to teach them and saw that they were sheep without a shepherd.

“Jesus had compassion for them and taught them many things. In other words, it was a long sermon,” Warnock said.

The disciples urged Jesus to send the people away, “to Burger King, McDonald’s, the Athenaeum. The people had heard enough, the disciples had done enough and it was time to dismiss them to find bread to live on,” he said. “For Jesus, this was the time to put the preaching into practice, the revival into revolution.”

The disciples represent the comfortable church, the people who come for about an hour and don’t want to get down and dirty in the real work of the real world.

“Was not this why the church has been silent the last 16 years of endless war? The church doesn’t clothe the naked, feed the hungry or fight for justice. But just when we think everything is finished, God is just getting started,” he said. “Our finish line is God’s starting line. When we think we have seen and done all that could be done, God gives us a new assignment. Immature believers give premature benedictions. A dismissal says, ‘be gone,’ while a benediction says, ‘be blessed.’ ”

“God, in this moment, is saying don’t be so quick to dismiss the concerns of the crowd. Jesus says, ‘You give them bread. Remember my first sermon to free the captive and when I taught you to pray, ‘Give us this day our daily bread,’ ” Warnock said. “People are crying for the bread of justice. We need to learn to love. Justice is what love looks like in public.”

Warnock was interviewed by CNN on Saturday about the events of the last week.

“I said they were tragic, predictable and inevitable. We can’t talk long about police brutality without talking about racism, mass incarceration and the need for criminal justice reform. That one sector is worse now than before Martin Luther King Jr. started marching,” he said. “The United States warehouses 25 percent of the world’s prisoners; we are the incarceration capital of the world. There are more people under supervision [in the criminal justice system] than were in slavery in 1850. It is not whether the cops are good or bad but that we have embraced a public policy that is predictable and inevitable. It is Jim Crow reinscribed in a new day.”

Jesus told the disciples to give the people something to eat.

“God is saying we have to learn how to feed one another. We have to take inventory; we have more resources than we think. Church people like to revel in the miracle of this story, but perhaps the miracle is not in the multiplication, but in the magnanimous spirit that Jesus evoked from the people,” Warnock said. “They knew they were going to hear a preacher baptised by the Baptist, so he might preach a while. They brought a little fish, some bread, a little potato salad, macaroni and cheese, fried chicken and began to feed each other.”

There was a contagion of mutual care and concern, he said.

“It was love going viral. We have to get organized so everyone can eat, everyone has an education, a living wage; get organized,” Warnock said. “They gave [their food] to Jesus who gave it to the disciples who gave it back to the people and it was multiplied. That is how we liberate a city, a nation and grow the church.”

Jesus gave them a benediction, a blessing.

“God be with our nation in this moment and reject those who would use this moment to gain political power. Let us embrace the God who wants everybody to eat,” Warnock said.

The Rev. Robert M. Franklin Jr., director of the Chautauqua Department of Religion, presided. The Rt. Rev. Matthew Lynn Riegel, bishop of the West Virginia-Maryland Synod of the Evangelical Lutheran Church in America, and the Rt. Rev. Eugene Taylor Sutton, bishop of the Episcopal Diocese of Maryland, were concelebrants at communion. The Rev. Rebecca Cole-Turner, minister of spiritual formation at Smithfield United Church of Christ in Pittsburgh, served as a reader. Ed McCarthy, permanent deacon in the Roman Catholic Rite of the diocese of Cleveland, read the Scripture. The hymn-anthem was “Look Who Gathers at Christ’s Table,” text by Thomas Troeger and tune by Michael Corzine, arranged by John Ferguson. The responsorial psalm was Psalm 116, “The Name of God,” with a setting by David Haas. The Gospel acclamation was “Joyful Alleluia” by Howard Hughes. “The Lord is My Shepherd,” was he offertory anthem with a setting by John Rutter. Music during communion was “O Sacrum Convivium!” by Olivier Messiaen and “Communion Anthem” by David E. Kellermeyer. The organ postlude was ‘Trinity,’ Fugue in E-flat, S. 552 by Johann Sebastian Bach. Jared Jacobsen, organist and coordinator of worship and sacred music, directed the Chautauqua Choir. Peter Steinmetz served as cantor. The Samuel M. and Mary E. Hazlett Memorial Fund provides support for this week’s services.