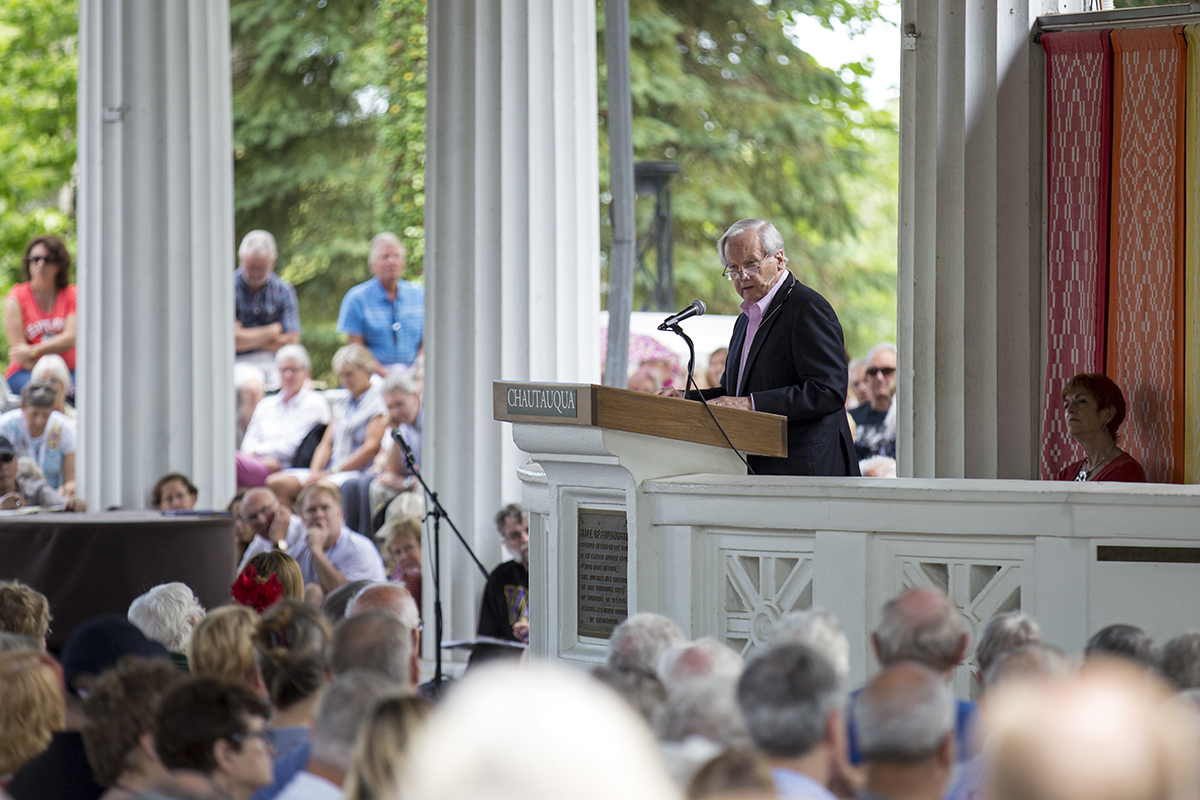 Twenty-five years ago, broadcast journalist Bill Moyers and his team began documenting the lives of two families in Milwaukee whose breadwinners had just been laid off. In the two and a half decades since, both moms took full-time, minimum wage jobs and both fathers became gravely ill. One family fell $30,000 in debt when the father needed an extended stay in the hospital. They shuffled through odd jobs. The cameras rolled as the bank foreclosed on their home. One daughter foreclosed on college and one son went into credit card debt.

“What’s most tragic is that while they are patriotic, they no longer believe they matter to the people who run the country,” Moyers said. “They simply do not think that their concerns will ever be addressed by the political, corporate and media elite who make up the dominant class, and they are right.”

Capping a week of lecturers on money and politics, Moyers, an award-winning broadcast journalist, minister and former top aide to Lyndon B. Johnson, spoke on the Interfaith Lecture platform Friday in the Hall of Philosophy. He deplored politicians and corporate elites indifferent to the rising inequality he said is crippling American democracy.

Moyers recalled his earliest days as a journalist. At 16 he was assigned to cover the Housewife’s Rebellion, in which 15 white Texas housewives refused to pay the Social Security withholding tax their black domestic workers needed to avoid poverty in old age. They called it unconstitutional, Moyers said, but racism was really at play. Those housewives, pious members of their community, Moyers said, could not imagine that people unlike them could also be members of their community.

“This is the oldest story in our history, the struggle to determine whether ‘We the People’ is metaphysical reality, or really just a charade masquerading as piety and manipulated by the powerful and privileged to sustain their own way of life at the expense of others,” Moyers said. “The difference is vast between a society whose arrangement is to serve all citizens and one whose institutions are converted in stupendous fraud: Democracy in name only.”

From the stage, Moyers recited the preamble of the Constitution and the audience said it back it line by line.

“‘We the People of the United States do ordain and establish this Constitution for the United States,’” Moyers said. “What do these words mean but that we’re all in the business of nation-building together?”

With inequality rising and the rich only getting richer, Moyers said, the United States is increasingly serving the wealthy.

Although acknowledging that early America was morally decrepit, with a quarter of the population enslaved and settlers continually pushing Native Americans off their land, Moyers said the nation progressed and became unique.

“Something remarkable happened here,” Moyers said. “Despite the flaws of human nature or perhaps because of it, we forced a civilization, that thin veneer of stability that stretches across the passion of the human heart.”

Moyers held up two people as Old Guards of that ideal America: poet Walt Whitman, and President Franklin Delano Roosevelt. Whitman, Moyers said, glorified the American working multitudes — ranchers, ship-builders, housekeepers, farmers – who labored together to build America. Moyers quoted an FDR speech in which the four-term president spoke of how every American is equal in the voting booth, their rank and class cast aside.

“FDR understood that the soul of democracy rests in political equality,” Moyers said.

By contrast, today working men and women rarely appear on the morning talk shows or publish op-eds, Moyers said. Their concerns seem distant to the politicians who talk of corporate taxes and wealth creation.Far from political equality, Moyers said, it seems corporations can buy elections as unprecedented amounts of money flow into the political system.

“Today, the new gilded age roars around us like a lion on a rampage,” Moyers said.

Quoting Louis Brandeis, the lawyer who defended FDR’s New Deal as an associate justice on the Supreme Court and fought for women’s rights and against big banks, monopolies and corporations even before he reached the bench, Moyers gave a stark warning.

“‘You can have wealth concentrated in a few hands, or you can have democracy,’” Moyers said. “‘You cannot have both.’”