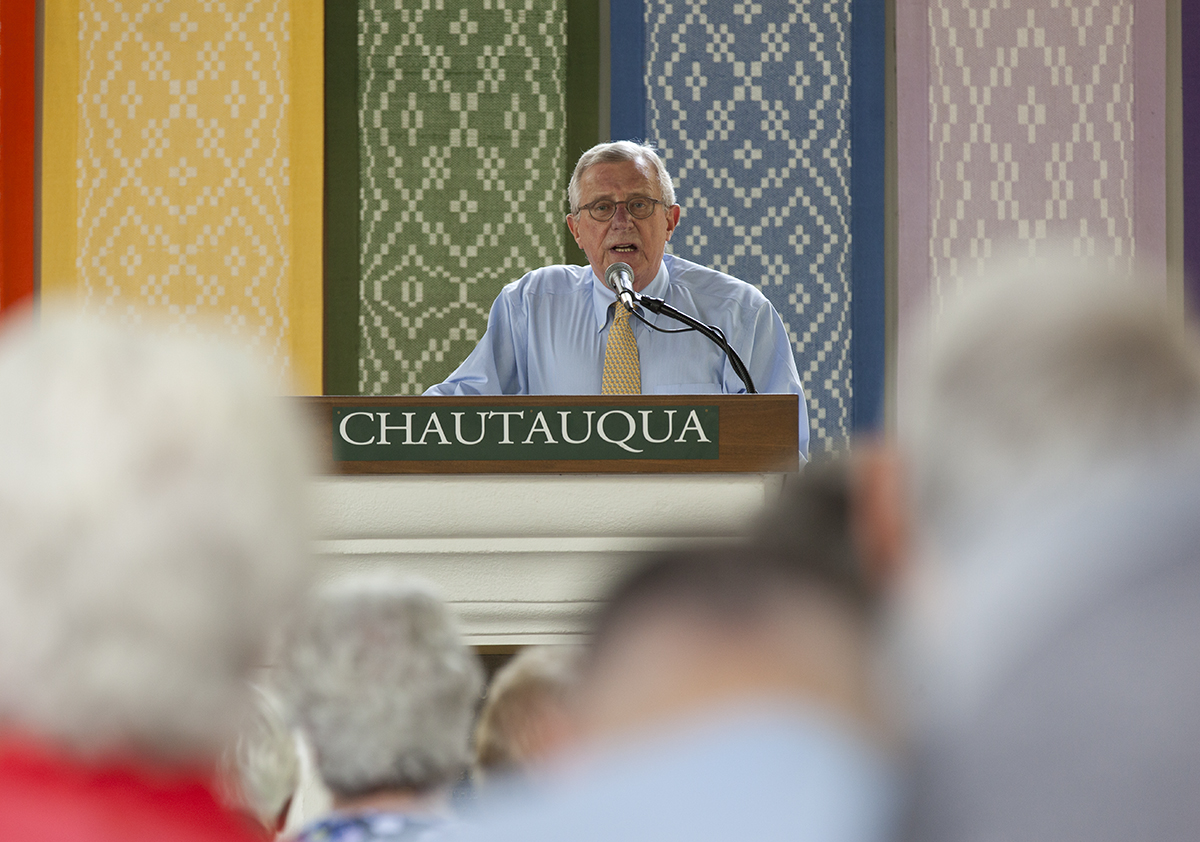 The Rev. John M. Buchanan wants you to give your life away.

Giving your life away, he said, to family, science, the earth, church and anything that aids the rest of the world, is the secret both the Bible and social science has revealed as the path toward finding meaning and satisfaction in life.

On the Interfaith Lecture platform in the Hall of Philosophy Thursday afternoon, Buchanan, pastor emeritus of Fourth Presbyterian in Chicago and the former editor and publisher of The Christian Century, said the key to ending the money-mad society that is destroying the planet is in Paul’s warning against the love of money and the Gospels’ commandment to devote oneself to Jesus’ teachings.

Buchanan drew inspiration primarily from Paul’s teaching that “money is the root of all evil” and Jesus’ teaching: “Those who want to save their life will lose it, and those who lose their life for my sake and the sake of the Gospel will lose it, for what will it profit them to save the whole world and forfeit life?”

Translated from the Greek word psyche, “life” can actually mean soul or self, Buchanan said.

“It is the essential, rock-bottom self that is at stake here,” Buchanan said. “What is it to gain the whole world and, in the process, lose that?”

Although people may not think they worship money, Buchanan argued, everyone has a center of value that is essentially theological because, like religion, it forms the basis from which all other values arise. Quoting from theologian Robert Wood Lynn, Buchanan said in the United States, more than any other society, money becomes this center. Because, unlike Europe, the U.S. has no landed gentry or titled aristocracy, money serves as the chief indicator of status and the accumulation of property becomes the primary method of “keeping score.”

“When we think and talk about money, we are at the same time thinking and talking about something profound: values, for instance, and ethics and personal management, and stewardship in the broadest sense and responsibility,” Buchanan said. “Money is our relationship, our interconnectedness with the whole world. When we’re talking about money, we’re coming very close to the essence of our humanity.”

Buchanan said the Judeo-Christian tradition offers three precepts to go from that individualistic moneyed approached to a more selfless life devoted to the Earth.

The first, Buchanan said, is that creation is good. The Genesis creation story says “it is good” after the first day and “it is very good,” after the sixth day, so the answer is not to give up on all possession in this life in pursuit of the next.

The second, Buchanan said, is that man was meant to be God’s partner in creation. He interpreted the Garden of Eden story as a failure in responsibility; as man has shirked his responsibility to the earth, Adam and Eve ate from the fruit of the tree of knowledge. It was the one thing they couldn’t do, and then both blamed someone else; for Eve if it was the snake, for Adam it was Eve. The lesson, Buchanan said, is to take the responsibility of caring for creation seriously.

“Original sin then, in my mind, is to shrug our shoulders and say I can’t do anything about it,” Buchanan said

The third precept is the Gospel passage that says those who give their lives for Jesus will find redemption.

“If you want to live your life fully, vitally happily, you will have to discover someway to give your life away.” Buchanan said.

Buchanan offered evidence to back up the Scripture that said those who give themselves to money lose themselves. Erik Erikson, Buchanan said, argued that at the crisis of middle age, people can give themselves to generativity, working to give the next generation a better world, or stagnate, focusing only on themselves. The former, Erikson said, leads to fulfillment. The latter is an endless cycle of conspicuous consumption that leads nowhere.

Whether or not society as a whole chooses to give their lives away, the decision time is soon, Buchanan said.

“You and I, though we do not always feel it, have more power and money than our parents and grandparents could begin to imagine,” Buchanan said. “It is a good thing — not neutral, not ambiguous, certainly not evil — like the creation titself it is very good. And with it comes both privilege and responsibility.”

Young Dancers to Showcase Variety of Styles in Studio Show