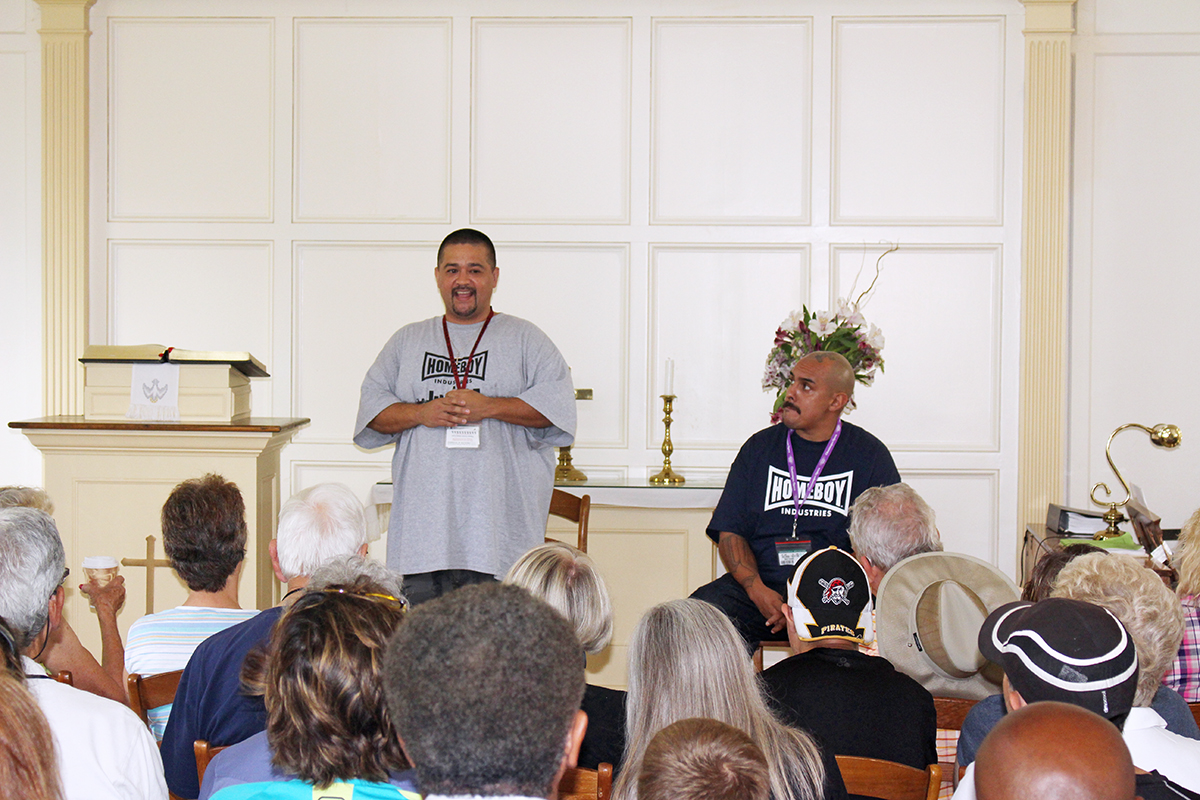 Thaddeus Skiles is nervous. He starts to speak hurriedly and stirs restlessly on an undersized ladderback chair. A packed room at the United Church of Christ Headquarters stares expectantly. But when he breaks off mid-sentence to stand, the people applaud and Skiles begins to weave a perspective rarely heard among the rarified Amphitheater speakers.

“Everytime I do this I get nervous and honestly, it’s because I’m still healing inside,” Skiles said. “There’s a lot of parts of me that say, ‘Why me? Why am I here? Why do I get to do this today?’ I’m still learning to value who I am.”

Skiles and his colleague David Andrade are representatives of the Los Angeles-based Homeboy Industries, the world’s largest rehabilitation program for former gang members. Homeboy Industries is not new to Chautauqua Institution. Its founder, Fr. Greg Boyle, S.J., has lectured on the grounds three different times and this year served as Week One’s chaplain in residence. The difference is that when Boyle first spoke at the Institution in 2012, Andrade was sitting in a California prison and Skiles was not long out.

On July 14, the natives of impoverished L.A. neighborhoods found themselves in Chautauqua — possibly, as one questioner noted at the end of the talk, the farthest place from those origins possible.

“I don’t know what anyone’s experience has been with people like us,” Skiles said after his talk. “But [I’m here to] just show people how we’re not what you see on TV. We’re humans who just have really bad situations.”

Skiles is 39, meaning he came of age at the height of the crack epidemic in the late ’80s and early ’90s and, by extension, amid the worst outbreak of violent crime in U.S. history. His story became almost textbook in cities across the country. Gangs fought turf wars over streets to sell drugs and enlisted kids as young as 11 to distribute them. Police, the thought went, would be less likely to stop or arrest children.

And Skiles was one of those children, he said, and an addict by the age of 13. But Skiles did not start distributing drugs in gangs. He was doing it at 6, sorting packets of powder on the kitchen table with his father and dropping them off across the neighborhood. At 7, he hid in the garage and watched as just a few feet away, a man stabed his father’s best friend to death.

“I grew up in a house without a lot of love,” Skiles said. “It wasn’t a house where we hugged each other and said, ‘I love you.’ Those things didn’t happen in my house.”

When he wasn’t shuffling drugs, Skiles said he suffered physical and emotional abuse. Each time his mother left a relationship, she often left him behind. His mother remarried and his new stepfather tried to love him, but Skiles said after so much abuse he didn’t know how to accept that love. He started leaving home and living on the streets for months. When his actual father left, Skiles joined a gang and found relief from his own pain by inflicting harm on others.

“I thought I had lost the last person who really cared about me,” Skiles said.

He never made school a priority, he said, and schools never made him one either, kicking him from place to place until he had attended, however briefly, every school in lower Los Angeles. His experience is not unique. Over the last decade, activists and social scientists have begun to describe and work to change what they call the “school-to-prison pipeline,” a term that highlights how zero-tolerance discipline policies and failing schools leave kids with no choice but a life of crime and, eventually, prison.

Soon Skiles was weaving in and out of prison on drug crimes every few years. After he finished a year-and-a-half sentence in 2010, his stepfather refused to take him back in. It was the first time for that; Skiles’ stepfather had lost patience and faith in him. The next day, his parole officer said Skiles either had to attend rehab or go back to prison. At the UCC Headquarters, Skiles held up a thick prayer book to show how big his case file was. He chose rehab. He got clean.

He found Homeboy Industries two months after leaving rehab, as he sat on the verge of relapse and recriminalization. He could get clean, it seemed, and stay off the streets for more than a year. But he, an ex-gang member, couldn’t find a job.

Skiles was not alone. Boyle started Homeboy Industries in 1992 when gang members told him about their employment difficulties. That year Los Angeles County was hit with the most murders (2,589) in county history, and it would rise again in 1993 before tailing off ever since. Boyle was a young Jesuit priest who asked to be placed in the poorest parish in LA. He operated with the motto, “nothing stops a bullet like a job,” and opened Homeboy Industries as a bakery that hired ex-gang members.

In the ensuing two decades, Homeboy grew in prominence to the point that when Skiles walked into his parole office to complain how he couldn’t get a job and threatened to return to his former lifestyle, an ex-gang member pulled him aside and told him to go to Homeboy Industries.

“I went there and expected it to be a little shack with a bunch of cholos out front and a white dude standing there helping people,” Skiles said. “And it was actually this big beautiful building and a bunch of people I had been in prison with smiling and asking, ‘How I can help you?’ ”

Over 20 years, Skiles said, Homeboy had expanded to fit every need that arose. They offer anger management classes and therapy sessions, high-tech job training, GED classes and tattoo removal, among other services. They serve more than 12,000 people in some capacity each year and several hundred sign up for their full 18-month rehabilitation program, Skiles said. In the wake of the Great Recession, there wasn’t a job for Skiles, but he was asked to volunteer and enroll in Homeboy’s solar-panel installation job-training school. He graduated top of his class and returned to volunteer every day until they asked him to teach the course. He now works with people finishing the program as they try to find jobs.

Which is how he found Andrade, an ex-gang member who had served in prison from age 18 to 27 and, upon release, used the $200 the California Prison System gave him to get from West Hollywood to southern Los Angeles and Homeboy Industries. He took the 18-month program and, under Skiles’ forceful recommendation, took the solar- panel course. Andrade now teaches the program and, with the aid of Homeboy Industries’ counseling services, repaired his relationship with his family.

“Friends I have at Homeboy are my brothers,” Andrade said. “I have worst enemies that I would have tried to kill … who I now consider my best friends.”

In addition to their work for Homeboy Industries, the two now help lead community movements to help other ex-felons reintegrate into society. They’re pushing for the Fair Chance Ordinance, one measure of a nationwide movement to eliminate the checkbox on job applications that asks if the applicant has a criminal record.

“We want employers to look at people for who they are and give them a chance before throwing away their application,” Skiles said.

When Skiles finishes his talk, he hugs every Chautauquan who greets him. He said he’s moved out of his old neighborhood but still lives with the repercussions of his old life. He hasn’t repaired the relationship with the son he left behind during his jail sentences, but he keeps trying. Clean, employed, stable, he said he only has one goal: starting a family.

“I want to have something I didn’t have growing up,” Skiles said.