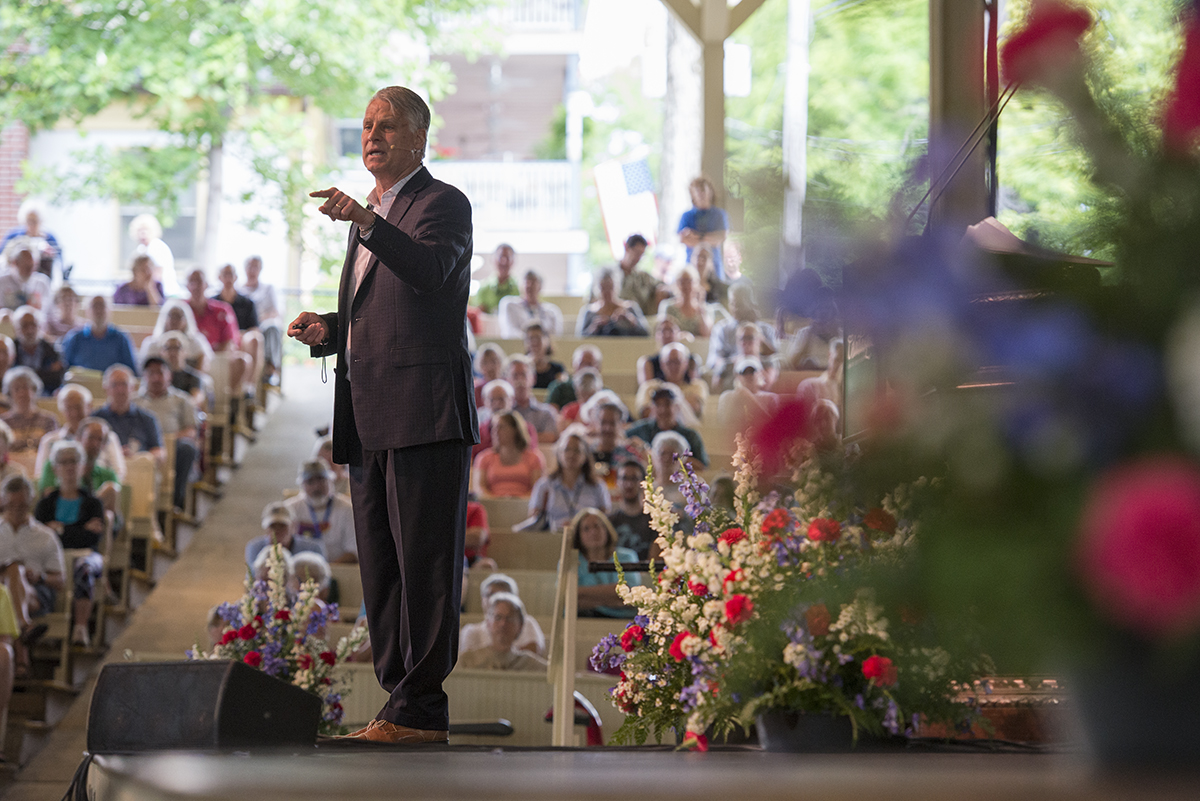 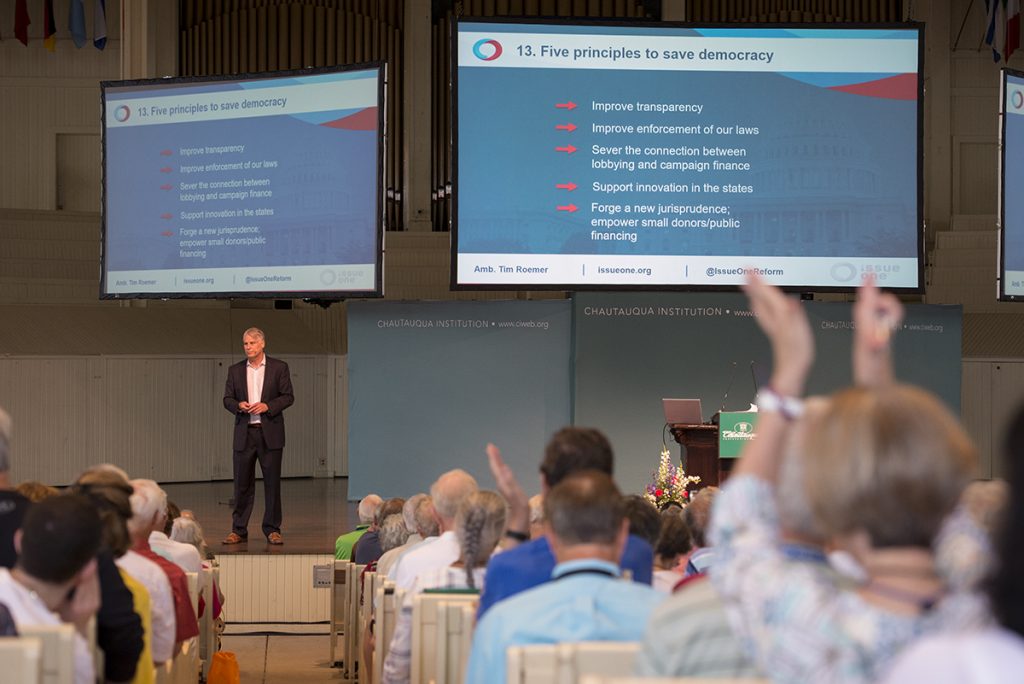 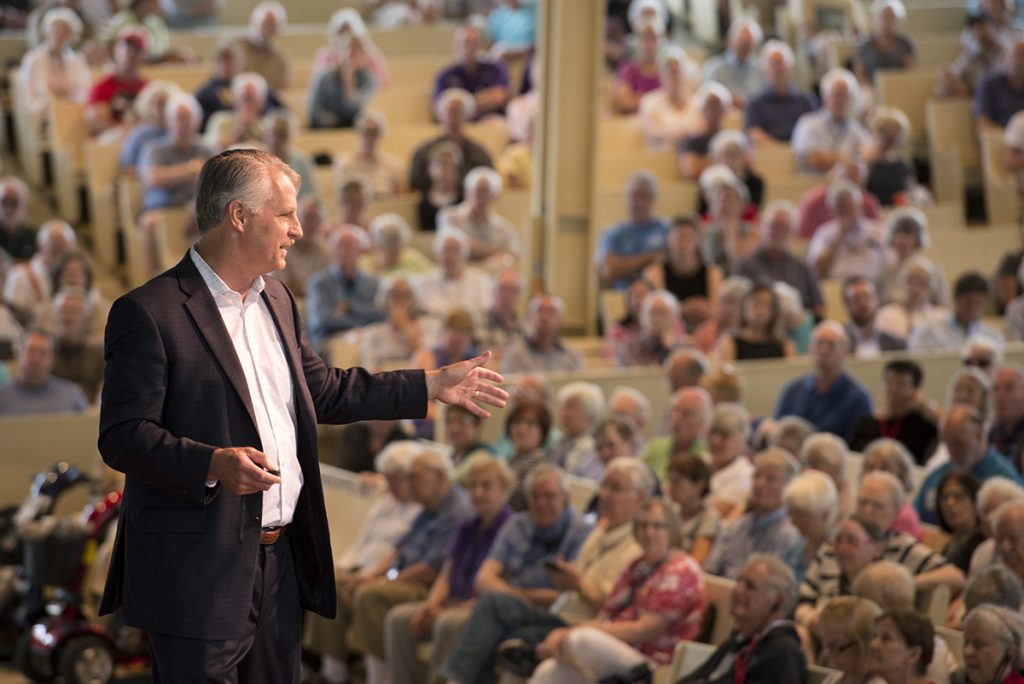 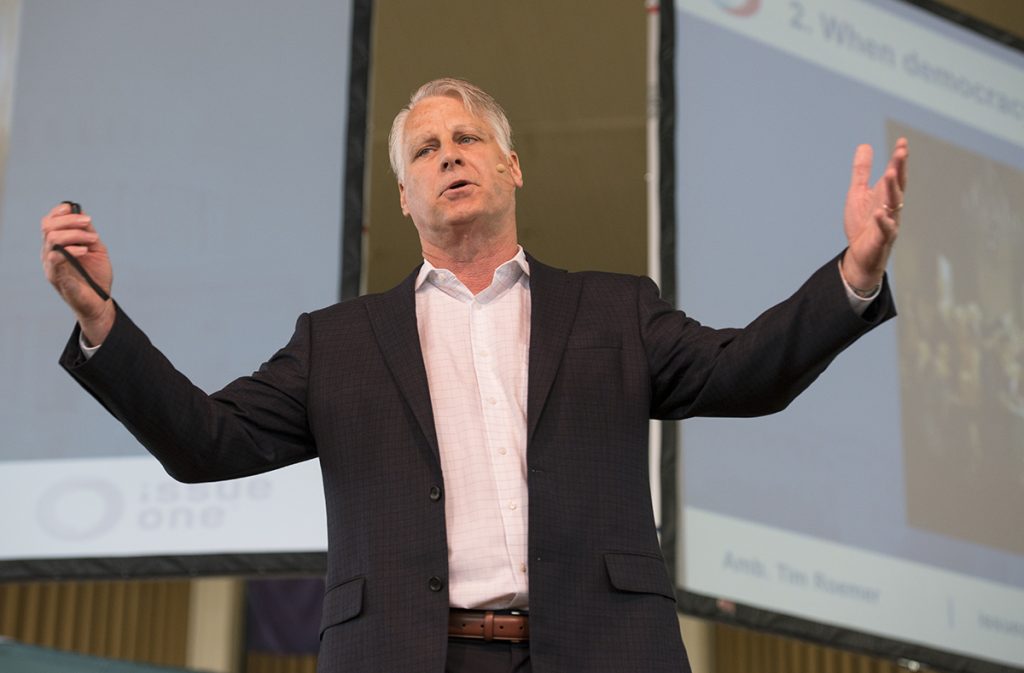 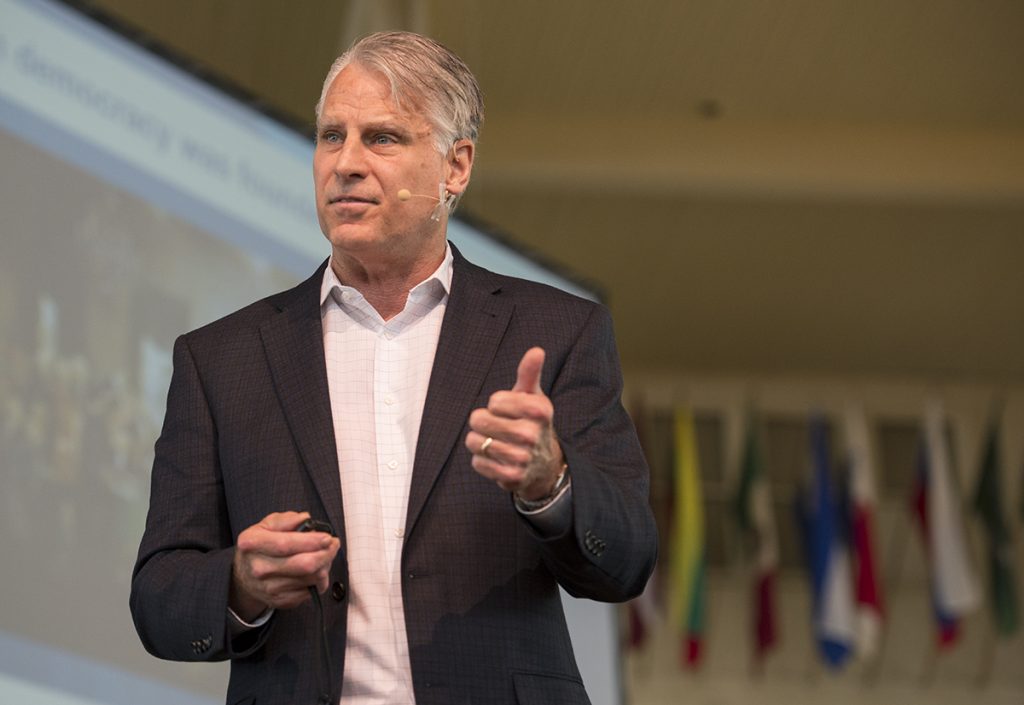 Roemer ended the weeklong theme of “Money and Power” by emphasizing how the influence of big money in politics threatens America as a democracy during the 10:45 a.m. July 8 morning lecture in the Amphitheater.

“[It is] a government designed, ladies and gentlemen, for we the people — not the lobbyist,” Roemer said. “Not the special interest. Not the wealthy. We the people and the voice of America.”

Roemer said the group is called Issue One because no matter what issue an individual cares about, whether it is higher education costs, law enforcement, gun control or climate change, the fate of the nation’s democracy should be the first issue. To Roemer, none of those other issues can be resolved without the restoration of democracy in American society.

In order for that change to happen, Roemer believes the citizens of the United States must act.

“Democracy is a verb — not a noun,” Roemer said. “It demands action from all of us. It demands our time. It requires us to stand up, as the people of Chautauqua have done over the years and the decades here, to formally state what is right, morally right, ethically right, politically right.”

Roemer recalled the lesson his father taught him about faith. His father said Roemer needed to go to church each Sunday and say his prayers, but the Sabbath Day was not the most important part of faith: It was the rest of the week.

“It was not the prayer and the words,” Roemer said. “It was activity and action. It was what you fought for.”

Similarly, Americans must have faith in their government and stand up for the issues they believe in. Roemer said New York has the power to influence the presidential election by being the home state, or adopted home state, of the two candidates: Donald Trump and Hillary Clinton. Ohio has an influential power through the position of being a swing state.

According to statistics Roemer cited from an Issue One study, fixing money’s influence on government is one of the top five issues of citizens, and 81 percent believe the impact money in politics is worse now than ever before.

When Roemer ran for office in 1990, he spent $850,000 on his campaign for U.S. representative of Indiana’s 3rd Congressional District. Today, the average money spent on a campaign for the House of Representatives totals $1.6 million.

Roemer said the impact of money in politics discourages people from running for elected offices because of the staggering costs of a campaign.

“Anybody in our great country should be able to run for office not based on what they’re worth or [the amount] in their bank account, but based on their ideas and their heart,” Roemer said. “That’s the morality and the principle of our great United States.”

Roemer said there is hope and the process of fixing America’s democracy has begun. He said many states are taking strides to combat this issue including Arizona, Maine, Florida and Michigan. Those initiatives included clean election programs and publicly financed election movements.

Roemer encouraged Chautauquans to get involved by talking to their friends and neighbors, writing their lawmakers and joining Issue One’s cause. He specifically encouraged the young voters, many of whom he believes are losing trust in the government.

When Roemer was in fifth grade, he jumped at the chance to run the campaign for Robert F. Kennedy’s mock election. He said his hand “shot up like a rocketship to the stars” because he believed Kennedy could make a good president. Roemer said that same belief does not exist in many of the young voters.

“We need you,” Roemer said. “We want you to get involved in public service. Now’s the time to get involved because people are so unsettled. They’re so angry. We’ve moved from the hope and change election in 2008 to the rage and revolt of 2016, and it’s young people who can help us bring back this spirit.”