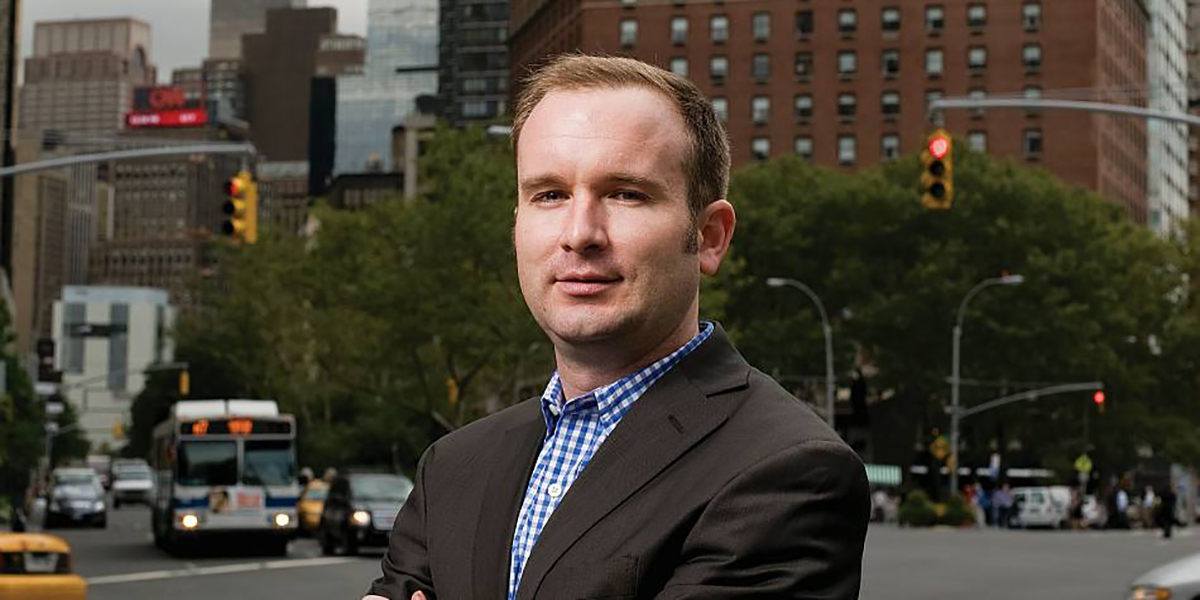 Bryan Doerries doesn’t seek the answers. Drawing on the wells of the past, he instead strives for solace and understanding.

In beginning his book, The Theater of War: What Ancient Greek Tragedies Can Teach Us Today, Doerries lays out a quizzical epigraph, an inquiry posed first by the German philosopher Friedrich Nietzsche in his work We Philologists: “People have always endeavored to understand antiquity by means of the present — and shall the present now be understood by means of antiquity?”

Doerries will be asking that question at 10:45 a.m. August 19 in the Amphitheater as he closes out the Week Eight morning lecture theme of “War and
its Warriors: Contemporary Voices.”

In 2003, before establishing himself as the founder of Theater of War, Doerries sat as a helpless and powerless observer in his New York City apartment, watching his girlfriend ultimately succomb to her 20-month struggle with cystic fibrosis.

It was in that disillusioned period of Doerries’ life that he turned to ancient Greek tragedies. At the time, unbeknownst to him, the ill-fated characters of those ancient stories would translate into a form of therapeutic counseling.

“Not all of a sudden, but gradually in the weeks and months after she died, the plays that I thought I knew and loved began to speak to me in a different way,” Doerries said. “As if they’d been written for me or about me. As if they were letters written from the ancient world to the present. I took solace in some of the things that I hadn’t really fully understood about the plays, characters who were deeply conflicted, or grieving or experiencing loss.”

That would go on to spark the idea of presenting those stories in front of other audiences who’d experienced similar instances of cost and trauma.

Following The Washington Post’s 2007 report of the Walter Reed National Military Medical Center scandal on institutional negligence and maltreatment, Doerries decided to focus his efforts on the country’s embattled and forsaken military servicemembers and veterans. It would eventually create “the most ambitious collaboration between artists and the Department of Defense in American history.”

More than 350 performances later, Doerries and Theater of War have clearly established themselves as a monumental success. Much of it can be attributed to Doerries’ initial insights into the possible original purpose and context of the ancient live theater: to convey the story of the warrior.

“Theater in the Western world, and Greek tragedy in particular, was born from the need to hear and tell the soldier’s story,” Doerries said. “In my opinion, [theater] is a military technology that was developed out of a necessity in a democracy, that was more militarized than we could ever imagine, in order to communalize these series of war; in order to share the pollution and the burden of what comes back from war; in order to normalize the trauma of war; and in order to give people a space where they can feel validated and heard.”

Sophocles, most well-known for his three Theban plays — Antigone, Oedipus the King and Oedipus at Colonus, — was also an elected Athenian military general.

Doerries knows when his company stages a reading of a 2,500-year-old play about some mythological being before a 21st-century military audience and family members, it’s not trying to say the characters in the story are a mirror version of the audience. Rather, he’s trying to provoke an emotional transference over the distance of that millennia.

“When we do Theater of War, we’re not saying to audiences that this is you,” Doerries said. “How could we? It’s a totally, radically different culture. But we’re asking people to look inside themselves and make connections on their own. What do you see of yourself in this? It creates [this] safe space, this distance.”

Those are not full performances, just readings, and many of the actors who do the readings are prominent film and stage veterans. Although they are generally allocated no more than a day of preparation, the brevity of rehearsal allows for a raw symbiotic discovering of character between both the actors and the audience.

“The readings are like readings on steroids,” Doerries said. “People leave their vocal cords on the table. They bring everything to bear of what they have to make the text come alive. We don’t do sandals and sheets. And we don’t do all of the trappings and over-determined symbols of Greek tragedy because the minute our audiences — many of whom have never seen a play, let alone a Greek tragedy before — smell any pretense on our part, the gig is up.”

When it comes to the question of who’s responsible, who’s innocent or why should anyone care, for Doerries, no one is in the clear — military or civilian. To live through a war is to be a participant in some capacity.

“When we perform primarily for civilian audiences with a spattering of military in them, part of our objective is to bridge the divide,” Doerries said. “One of the things I think we all need to do is wake up to the moral reality that 99 percent of us didn’t serve in the recent wars. And regardless of our politics or our perspectives on American foreign policy, we have a moral obligation to actually engage with those who did.”

Doerries has made sure that after each of the performance readings, there’s an accompanied discussion session. Doerries will involve the audience, asking questions such as, “What does this play mean to you?” or “Why do you think Sophocles wrote this play and staged it for his community of mostly soldiers?”

There was one response, Doerries said, spoken by a junior enlisted soldier, in reference to the latter question, that resonated strongly in his memory. The soldier said, “I think Sophocles wrote this play to boost morale.”

Doerries then asked the young man what’s morale-boosting about watching a great warrior lose his best friend and then, in grief and sadness and burdened with a sense of betrayal, take his own life.

Before Doerries could finish his question, the young man replied, “Because it’s the truth. And because we’re all here acknowledging it. Shoulder to shoulder.”