Week Eight’s theme is “War and Its Warriors: Contemporary Voices,” which brings military veterans such as Phil Klay and David H. Petraeus to the morning lecture platform. Thinkers such as Pamela Lightsey and Shareda Hosein will speak on the moral implications of war with their Interfaith Lectures. And celebrated translator Stanley Lombardo was scheduled to speak with the Chautauqua Literary Scientific Circle on Thursday about one of the world’s original war stories: Homer’s Iliad (Lombardo is unable to travel to Chautuaqua, sothat presentation has been canceled).

But there’s another perspective Sherra Babcock, vice president and Emily and Richard Smucker Chair for Education, said she wanted to bring to the week: that of the civilian warrior.

She found this perspective in Diane Ackerman’s The Zookeeper’s Wife, originally a CLSC selection in 2008. Ackerman, a Pulitzer Prize finalist, was unable to present her work in 2008, but she’ll return for a special CLSC presentation at 3:30 p.m. August 17 in the Hall of Philosophy. 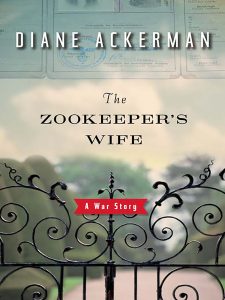 “We’re always happy to have Diane Ackerman,” Babcock said. “She’s such a treat, and she loves Chautauqua so much. And The Zookeeper’s Wife was a perfect book for a niche that we felt we had not covered in our week on war and its warriors, and that is the civilian warrior — the person who makes a real difference in a war who is not in the military.”

Lombardo’s translation of the Iliad starts with the word “rage,” Babcock said, but Ackerman’s The Zookeeper’s Wife captures a different emotion: compassion. She said the contrast between the two provides a different literary perspective into times of war.

Ackerman’s book is a work of narrative nonfiction that details the lives of Jan and Antonina Żabiński, who ran the Warsaw Zoo in Poland and used its facilities to help shelter hundreds of Jewish people fleeing from Nazi forces during World War II.

In an interview with Jessica Hundley of Do More, Ackerman described Antonina as someone “with a special kind of courage.”

“She was such a fascinating and inspiring woman,” Ackerman said in the interview. “Although her husband was heroic in more traditional ways, Antonina was heroic because of her radical acts of compassion. She wanted the 300 people she was sheltering — between the walls of her house, and in the animal cages — not only to survive the war, but to survive with their humanity intact.”

Babcock said Ackerman’s depiction of Antonina’s altruistic efforts came to mind when she was thinking about a different point of view for the week.

“Remembering that she wasn’t able to give the presentation [in 2008] and knowing that we wanted her to come back, we asked her to do that,” Babcock said. “We couldn’t think of a better book or subject than Antonina that highlights the people who are engaged in the efforts of saving people, but are not in the military.”

In his review of the book for The New York Times Sunday Book Review in 2007, D.T. Max lauded the unique nature of the Żabińskis’ work.

“The Nazis dehumanized the Jews; the Żabińskis hid them in animal cages,” Max wrote. “The Nazis behaved like beasts; the zookeepers, who were experienced with dangerous animals, threw them off the scent with subterfuge and lies. The Żabińskis’ effort was not just merciful, it was human in the deepest sense of the word.”

Ackerman echoed a similar theme in an interview with Jill Owens of Powell’s Books in 2007. She said Antonina’s story taught her that heroes can embody many different attributes, such as kindness.

Those heroes deserve to be recognized, too, Ackerman said.

“I’m fascinated how often and with what whole-heartedness people will risk their lives to perform acts of courage, sacrifice and compassion for total strangers,” Ackerman said. “Above all, that’s why I think Antonina’s story needs to be told, because it’s a tale of the heroic compassion that so-called ‘ordinary people’ rise to, in every era, and it’s time that they became role models, too.”