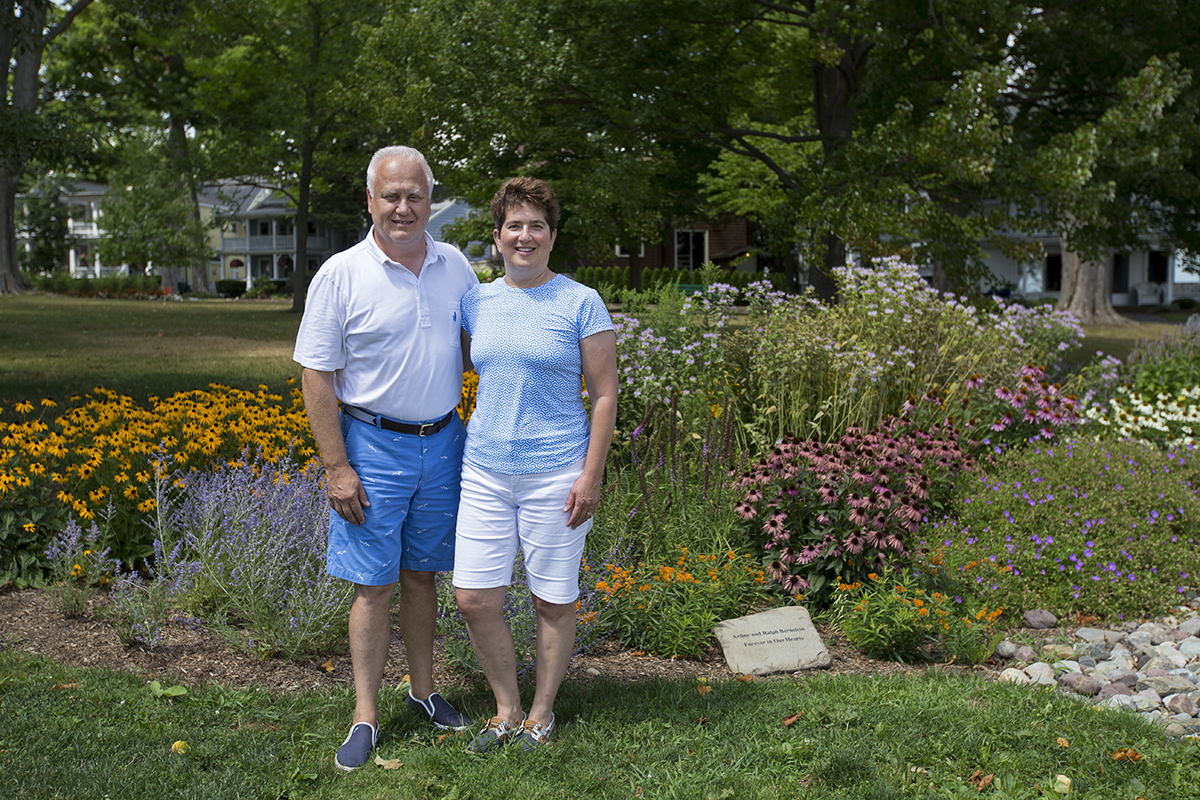 That’s Marc and Ellen Fultz’s Ohio license plate, a fitting reminder to the time and place they first met. It had been each of their very first days at Chautauqua Institution in the television room of the old St. Elmo, to be exact. Both had chosen to study music then.

Marc, who now works in e-commerce, played the trumpet. And Ellen, executive director of development, scholarships and special projects at Ohio University, played the flute. Ellen also likes to attribute her and Marc’s moment of kismet to her parents, Arline and Ralph Bernstein.

“They’re the reason we obviously ended up meeting each other,” Ellen said, “When I was 15, that was the first summer we came up. If it hadn’t of been for them, I would not have met Marc. And they loved this place as much as we did, so it was something that when my dad passed away, I wanted to do something at the Institution in their memory.”

Now thanks to a generous gift by Marc and Ellen Fultz, the Arline and Ralph Bernstein Memorial Rain Garden in Miller Park will flourish in perpetuity.

Ralph passed away two years ago in 2014, Arline in 2006. But both held the Institution close to their hearts. Having been an engineer, Ralph was familiar and interested in water conservation. Arline simply enjoyed the whole aesthetic of the Institution.

“I just thought my mother would have enjoyed the beauty it add[ed] to the space,” Ellen said of the garden. “And I know my father would have really bought into the idea of how important rain and runoff is, and to catch it, utilizing it before it goes into the lake. It was just kind of a perfect scenario to fund it.”

Looking back on her familial memories, Ellen remarked how the one constant singularity amongst the Fultz and Bernstein clan was one of music.

When Marc first encountered the Bernstein house, music was in the air, literally.

“I remember visiting the first time,” Marc said. “There [was] symphonic music playing, wafting through the air from the formal room.”

Ellen’s mother, Arline, had been a voice major at Syracuse University, teaching choir and singing. She had to postpone her career indefinitely as she went on to raise five children.

Ralph, Ellen’s father, wasn’t one for playing instruments, but he possessed other relatable talents, especially when it came to musical knowledge.

“He used to say he played the recorder player really well,” Ellen said. “He had no formal training, but that guy knew if a piece was on. He knew it like that. Of course having married my mother, a lifelong marriage, [there was] music throughout the home. They were really classical music lovers.”

Often, Ralph would elect to sit in the choir loft of the Amphitheater so as to better view the orchestra.

Though music played a large role in the family, it was the actual idea of family that took greatest precedence, with music fitted in later.

When the Bernstein family came to Chautauqua, they always tried to live under the same roof, giving free rein during the day, but making each of the daily dinners requisite.

“Our thing was you come and get to do what you want to do here at Chautauqua,” Marc said. “But we would always get together for dinners, and everybody would sort of say what they did during the day, [and we’d get] to hear what everybody got to do.”

One of the last family events with Ellen’s father, again fitting in the element of music, was a “forced” family fun night. Ralph took the whole family to the Chautauqua Symphony Orchestra, grandchildren and all.

“That’s a good memory for me, because I remember it was Beethoven’s Seventh, which is one of our favorite pieces anyway,” Marc said. “We’re all sitting up there with him in the choir loft, with the grandkids, [Ellen’s] sisters, and we’re just enjoying the [CSO] as family. That’s what’s nice about Chautauqua. It’s multigenerational.”

But when it comes to the rain garden, it’s multi-faceted. Abundant with plant and flower varieties such as purple cones and black-eyed Susans, it’s nearly impossible to miss the hundreds of thirsty bees nestling for nectar in the vibrant assemblage. One feature Ellen said she thought Ralph would have been favorable to were the bordering rocks.

“[My father] liked stuff that looked very natural,” Ellen said. “He’s the kind of guy that if he saw an interesting wild grass growing along the highway, he’d pull off and grab them, put them in a vase, and put it at the dining room table. He would not have wanted anything to have looked perfect. And that’s what we liked. It just looks very natural. Nothing really fancy.”

Passing by the site many times in the week, the Fultzes take solace in seeing the conductive activity buzzing around it.

“It’s nice because already we’ve been back a couple times, and you see people sitting under the tree there,” Ellen said. “The last time we were back, a girl with her beach towel was reading a book there which really made me happy. It just feels like a peaceful place.”

At the end of the day, Marc and Ellen Fultz come around to look at the garden, not only as a remembrance of good people, but a way to return a favor to the Institution.

“The chance to give back to Chautauqua in a way that was meaningful felt really good,” Ellen said. “I get to walk by that beautiful garden, and whether I’m enjoying it or seeing other people or just seeing it make Chautauqua an even more beautiful place, [it] just feels very good. It feels good to have given back in the way that we could and do something in my parents’ memory.”

For information about making a gift to the Promise Campaign or toward environmental initiatives at Chautauqua, please contact Geof Follansbee, CEO of the Chautauqua Foundation, at foundation@ciweb.org or 716-357-6220.