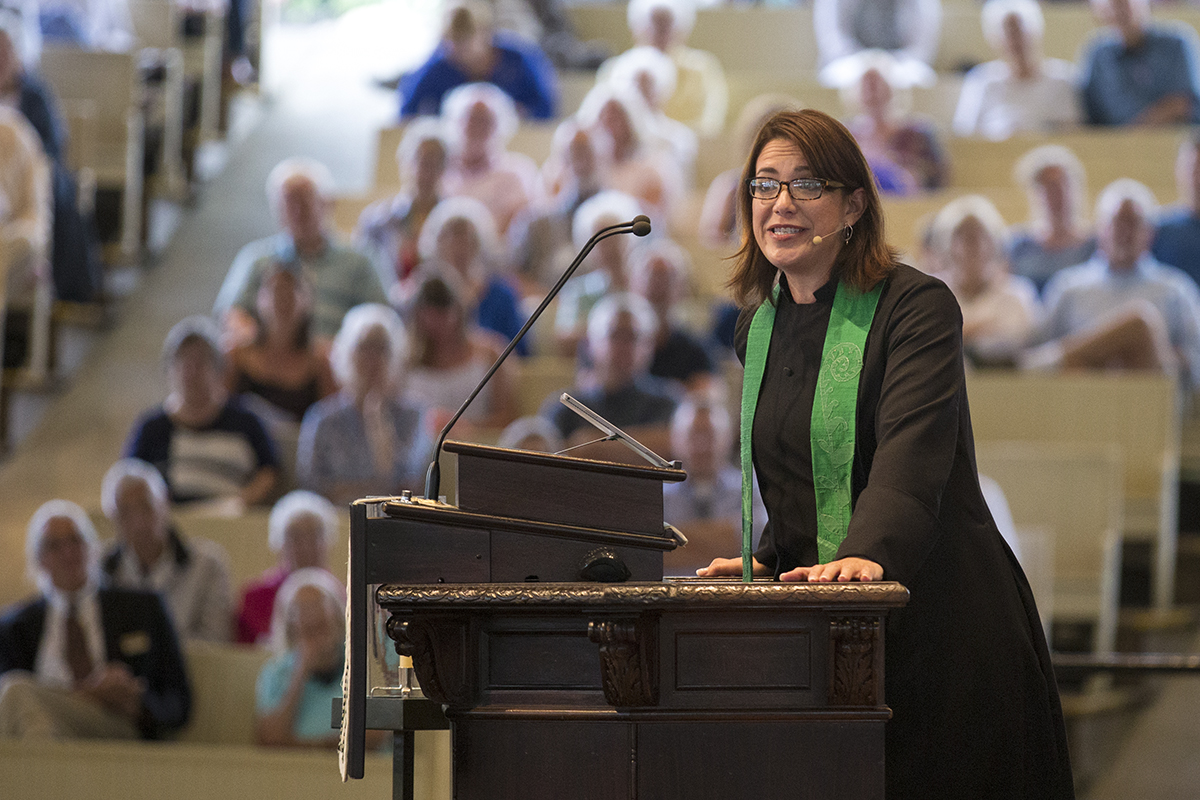 “I am sure that you, like me, rue the day you started spouting phrases your parents said all the time that you swore you would never, never say. Things like, ‘When I was your age I worked three jobs to get through college,’ ‘make good choices’ and ‘life’s not fair.’ That last one is especially true. Life’s not fair. Life throws us curve balls,” the Rev. Amy K. Butler said at the 9:15 a.m. Wednesday morning worship service in the Amphitheater. Her sermon title was “The Sound of Silence,” and the Scripture reading was Genesis 29:16-30, the story of Jacob’s marriage to Leah and Rachel.

This is an earlier episode in the soap opera of the life of Jacob, she said, referring to the story of Jacob wrestling with a stranger by the Jabbok River which she preached on at the Tuesday worship service. Jacob had already stolen his brother Esau’s birthright.

“Life’s not fair. Life is not fair at all,” Butler said.

Jacob met Rachel at a well as he searched for his uncle Laban’s camp and fell in love with her at first sight. He made a deal with Laban to work for him for seven years so he could marry her. Laban had two daughters, an older one, Leah, who is said to have tender eyes, and Rachel, beautiful of stature and appearance.

“We are not sure what tender means in this case, maybe weak, cross-eyed or of different colors, but a rivalry is clearly set up: beautiful versus nice eyes,” Butler said. “At the wedding, the whole community came to celebrate. The men separated from the women.”

The actual ceremony was short and was marked by the couple leaving for a quick consummation. Women were property and their only value was producing children.

Butler said Leah was used as a pawn and knew Jacob didn’t love her.

“Rachel is silent, voiceless, a woman judged by her appearance,” Butler said. “And these two women were used by men who did not have their welfare in mind. Talk about life not being fair; their lives were not fair.”

Butler reminded the congregation that in the story of the prodigal son, which she preached about on Sunday, the mother was silent or missing. There had to be a mother somewhere; she was essential to run the household, but we don’t know anything about her.

“We don’t know if she is out on the road with the father, whether she had forgiven her son or if she locked herself in her room holding on to her grief and regret,” Butler said.

She said in Rembrandt’s painting of “The Return of the Prodigal,” there is a shadowy figure in the upper left corner that could be the mother.

“The look on the face says that she is overwhelmed with emotion,” Butler said. “But she does not have a voice; she cannot or will not be part of the conversation of the return of the son. Maybe she was drowned out by the voices of the father, older brother and the prodigal or maybe she just did not matter.”

“When we don’t listen to all the voices, we are marginalizing them,” Butler said. “We make them silent observers of their own lives and that is not peace, reconciliation or right relationship.”

She talked about the controversy over Gold Star mother Ghazala Khan, who stood silently by her husband’s side as he spoke at the Democratic National Convention. Accused by Donald Trump of not being allowed to speak, she responded in an op-ed article in The Washington Post.

Butler said Khan wrote that every day she feels the pain of the loss. That place in her heart for her son will always be empty. She could not handle the pain of speaking, standing before the photograph of him over the podium.

“What mother could?” she asked. “[The American people] felt me in their hearts.”

“Or maybe we need to make room for voices not heard elsewhere,” Butler said. “We need to amplify those voices not being heard. We have to change that. The sound of silence echoes louder to become a vast chasm that separates us from each other.”

We have to whisper and listen for the whisper to give birth to the possibility of bringing people together.

“Peace, reconciliation and right relationship can’t happen until all voices are heard around the table, part of conversations that lead to peace,” she said.

The Rev. Carmen Perry presided. The Rev. Rebecca Seldomridge, chaplain-administrator at the United Church of Christ Denominational House and a former U.S. Navy chaplain, read the Scripture. Jared Jacobsen, organist and coordinator of worship and sacred music, led the Motet Choir in the sacred music for the day, “How Can I Keep From Singing?” by Z. Randall Stroope. The John William Tyrrell Endowment for Religion provides support for this week’s services.