Art, knowledge, music and religion. Those words, inscribed at the base of Fred M. Torrey’s 1946 sculpture in the center of the Bestor Plaza fountain, represent aspects of Chautauqua Institution’s programming pillars. 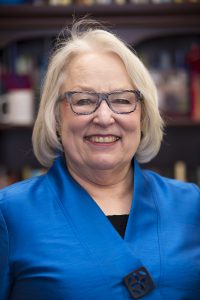 At 9:15 a.m. Thursday at the Chautauqua Women’s Club House, the Chautauqua Speaks series will focus on knowledge-related opportunities and programming. Sherra Babcock, vice president and Emily and Richard Smucker Chair for Education, will give a talk titled “My Chautauqua Education.”

The scope of Babcock’s portfolio includes something of interest to virtually everyone.

Babcock came to Chautauqua from Texas.

“This is my 10th season,” she said. “I can’t presume to be one of the old guys. There are some funny stories about being a newcomer.”

In 2003, she became the principal and founder of Project Partnerships, a consultancy specializing in student affairs transitions and leadership that provides hands-on assistance to liberal arts college presidents, deans and student affairs departments.

During the previous 11 years, Babcock served as vice president and dean of students at Southwestern University in Georgetown, Texas, from which she received her bachelor’s degree. Before that, she was senior vice president and management supervisor at Publicis International advertising agency (formerly Bloom), where she worked for 20 years.

At a time when few women were accepted into U.S. business schools, Babcock earned her MBA at Southern Methodist University in Dallas. She also holds post-graduate certifications from Harvard University’s Institute of Educational Management and the National Coalition Building Institute.

In her CWC talk, Babcock said she’ll give people a “little more sense of what goes on behind the scenes.”

“The whole process of choosing lecturers and speakers is interesting,” she said. “I’ll talk about the education department as it is today; some of the things we’ve done and how they’re different from before. I find when I go to an event on the grounds, people want to know how I do things.”

Throughout the calendar year, Babcock shapes the many programs within her purview.

“I think of it this way: Summers are operational,” she said. “If everything isn’t sewn up by the opening of the season, it throws a wrench into everything. During the summer, many things unfold and I make sure I have alternate plans.”

All sorts of challenges arise during the season.

“When we’ve got a problem, I know it before anyone else does,” she said.

According to Babcock, many lecturers spend considerable time on speaker circuits and are away from their families. They want to fly in, speak and leave. After arriving in Buffalo, however, their roundtrip to and from Chautauqua is three hours.

Although speakers are carefully vetted, sometimes they have off-days. Babcock said the 10:45 a.m. lecturers, thinking they will be speaking in a space the size of a high school auditorium, can be overwhelmed by the size of the Amphitheater. Often their response is, “Oh my goodness, this is huge.”

Occasionally a lecturer needs to switch the day of his or her talk. And once in a while, at the 11th hour, a speaker cannot come.

For instance, a month ago, Black Lives Matter activist DeRay Mckesson was scheduled to open the week on “Moral Leadership in Action” on July 11. However, he was among the more than 100 other Black Lives Matters activists arrested in Baton Rouge, Louisiana, the previous Friday. At Chautauqua that Monday, a panel including Bill Moyers, Andrew Young, the Rev. Raphael Warnock and Ouleye Ndoye Warnock filled in for Mckesson.

“People looked at each other and said, ‘This is the B-Team?’ ” Babcock said.

When the season ends, Babcock’s work does not. She said each September she “closes out” the season. In part, that entails finalizing accounts and reviewing evaluations. Thereafter, her responsibilities unfold in a “rolling process.”

During the fall, Babcock and her staff execute a long list of invitations for the next summer’s morning lecture slots. Babcock also hones in on The Chautauqua Prize, which celebrates a work of fiction or literary/narrative nonfiction for the richly rewarding reading experience it provides, and honors its author for contributing significantly to the literary arts. She said she sends out books for review, reads evaluations and sends out more books.

“One of the things I really love working with is the literary arts, from the CLSC books to the process of The Chautauqua Prize, which is in its fifth year,” Babcock said. “One of my responsibilities when I came in was to bring the literary arts together. I got to develop the Prize; that’s been my thing.”

According to Babcock, Chautauqua has a literary arts tradition strong enough for that national prize. The CLSC is one of America’s oldest continuously operating reading circles, and there are many readers and authors at Chautauqua. She said during the season, some authors are talking to the largest audience they’ve ever seen. The Chautauqua Literary Arts Friends was in about year two of its formation process when Babcock started. She said they chose not to be an independent organization because their mission was getting bigger than they could do on their own, and they had already arranged for the Literary Arts Center to be a program.

From late fall through the spring, Babcock works on both the upcoming and following seasons, and she contributes to Chautauqua’s marketing efforts.

“I love planning; going to Washington, D.C. and New York and talking with people who were here for the first time,” she said. “There are fabulous intellectual conversations.”

It is in early spring that Babcock and her team hire seasonal staff. She said virtually overnight, Chautauqua’s staff jumps from 90 to 2,000.

“Even trying to train our seasonal staff is a task we take very seriously,” she said. “We’re educating brand new people, including about what they are and are not responsible for.”

Babcock said she thinks people who come to Chautauqua for a week typically know how they want to contribute to its knowledge-related programming. The process of discerning between what they want and what they think they want, is challenging.