The Rev. Rita Nakashima Brock grew up in a military family: Her birth father and stepfather were both veterans. But growing up, Brock didn’t really understand war — she didn’t understand what it does to people. 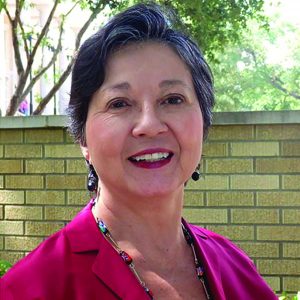 When her father returned from fighting in the Vietnam War, the experience had changed him. Brock said she wishes she’d understood that better at the time.

Years later, Brock is now a world-renowned expert in the study of “moral injury,” a concept that she thinks explains the impact war had on her father. At 2 p.m. today in the Hall of Philosophy, Brock will discuss “Moral Injury: the Hidden Legacy of War,” explaining that concept and addressing how to analyze situations when people violate their own morality.

Brock was raised in a Buddhist family in rural Japan until she was 6, when her mother married an American, Southern Methodist G.I. who brought her family to live in Ft. Riley, Kansas. Brock would not describe herself at that point as “religious” or a “church-goer” in the United States, but she did learn about the Bible at Sunday school and attend occasional non-denominational services on her father’s military base.

Brock said her early sense of Jesus was as a historical character in a book rather than someone present in her life.

“I found Jesus an odd character — my Sunday school teachers would talk about how kind and loving he was and had pictures of this blond, blue-eyed Jesus on the walls, but I actually read the Bible and he seemed kind of rude and mean to me,” Brock said. “He called people names and yelled at them; his behaviors were not like the Buddha, for example.”

When Brock started college, she was a pre-med major who was active in the civil rights movement. Religion was not one of her main interests.

But her classes weren’t interesting either, and Brock was actually in danger of dropping out of college. She asked a friend if there were any interesting classes being taught and received an interesting response: a recommendation that she take “Introduction to the Literature of the Old Testament.”

The class helped Brock understand that the civil rights and anti-war movements happening outside of class had a 2,000-year trajectory in the Bible, and she quickly became hooked on religious studies courses. After taking six classes on the Bible, Brock said Jesus started to make sense to her.

Brock ended up switching her major to religion, and went on to receive both a master’s degree and doctorate in the field. She became a practicing Christian and is now a commissioned minister of the southwest region of the Christian Church (Disciples of Christ).

Brock worked as a professor of religion for 18 years, but today she is the research professor of theology and culture and founding co-director of the Soul Repair Center at Brite Divinity School, a center dedicated to the study of moral injury and moral recovery.

According to the Soul Repair Center’s website, moral injury “is a complex wound of the soul” that “results from empathy and self-reflection on moral values in the wake of morally ambiguous, extreme conditions.” Brock said she sees moral injury in many war veterans she interviews for her research. It’s separate from post-traumatic stress disorder, which Brock said is based in fear.

When Brock learned what her father went through while serving in Vietnam, she realized that he suffered from moral injury.

“I think I understand what happened to my father and why he was like he was, and I wish I had known that at the time,” Brock said. “I wish that somebody had prepared me for what he might be like, not in terms of what actually happened to him, but the way war does change people. I think I would have been more patient with him and less willing to take everything he did so personally.”

Brock said as a young adult, she thought her father “had it in” for her, and consequently tried to engage with him as little as possible. Brock didn’t learn the details of her father’s Vietnam experience until after his death and never had a chance to repair their estranged relationship while he was alive.

Today, whenever Brock explains moral injury to veterans she interviews, she said they understand immediately.

But even though her work involves a lot of challenging, heavy discussions, Brock doesn’t find it hard. She said it’s the deepest way to move into a place that restores her faith in humanity.

“I find it heartening that you can take young men and women and throw them into the worst thing that humans have ever invented to wreck human beings, and they come back and they feel terrible — their consciences are still alive, their humanity is still there,” Brock said. “That to me is an amazing thing. To me, that’s why I do it. I meet so many amazing people when I talk to veterans; it doesn’t mean they’re not suffering, it doesn’t mean they’re OK, but that humanity — you can see it.”