Terry Stone, a managing partner in the Dallas office of the global management consulting firm Oliver Wyman, is intent on addressing that problem. She specializes in the development of differentiated growth strategies for pharmaceutical, biotech and health payer, provider and enablement clients, and focuses on how legislative changes and market shifts affect Oliver Wyman’s clients. 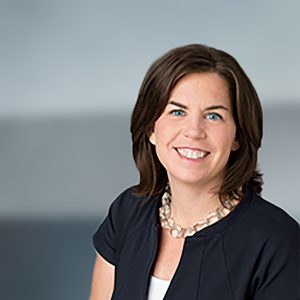 At 3 p.m. Saturday at the Hall of Philosophy, Stone will talk about “How Innovative Healthcare Companies are Improving Lives and Reshaping the Industry,” as part of the Chautauqua Women’s Club’s Contemporary Issues Forum.

“No doubt [the U.S.] health care system today is pretty broken,” Stone said. “There’s so much arguing and everyone’s getting in each other’s way. For ourselves, our families and our children, we need to fix it. People have strong views about it. Because there’s so much politics and noise, not enough people understand the basic facts.”

Stone said she is “amazed by the extraordinary distortion” on both the left and right.

“On the left, there’s a misperception about how much money is in health care and a feeling that there are evil people,” she said. “On the right, there are those who feel that they work hard and say, ‘How dare you demand that I help pay for the health care of other people.’ But they actually are already paying because hospitals pass along their unpaid costs.”

Another example of distortion is that health care pricing is completely irrational. According to Stone, there is no “price.” Drug prices, for instance, are negotiated. She likened their pricing to negotiating for a Persian rug. The tag says $10,000, but after bargaining, the price paid may be $3,000.

Stone said her talk on Saturday afternoon will be about the nature of the general U.S. health care problem, as well as the “bright spots” out there – companies doing right.

“We work for commercial customers and are increasing collaborative partnerships,” Stone said. “We work on making health care more affordable and of higher quality.”

Originally from New Jersey and Connecticut, Stone majored in chemistry and was a pre-med student at The College of the Holy Cross. She said that initially she wanted to be a doctor, but it didn’t fit her personality, and laboratory research didn’t interest her. When she was coming out of college, chemistry students were being advised to go into pharmaceutical sales. Stone decided that was her dream job. Early in the 1990s, however, pharmaceutical companies were laying off people.

With her knowledge of chemistry and prior sales experience, Stone said she found her way to a little startup company in Cambridge, Massachusetts. Its founder had developed a biochemistry software program that enabled chemists to create the graphics they needed for their reports. She said she was given lots of responsibility and met with reps from many pharmaceutical companies.

Stone went on to earn her MBA at the University of North Carolina at Chapel Hill. For her, the process of learning via studying business case studies and exercises was fun. She worked for Dell Computer and in the publishing industry before beginning her 16-year tenure at Oliver Wyman’s Boston office, where she became a partner in the firm’s Financial Services Practice.

Oliver Wyman is a wholly owned subsidiary of Marsh & McLennan Companies, with offices in more than 50 cities and 26 countries. According to its website, its global management consulting “combines deep industry knowledge with specialized expertise in strategy, operations, risk management and organization transformation.”

“What drew me to management consulting was intellectual curiosity; understanding how things work and trying to solve problems,” Stone said. “Companies mostly call in management consultants when their existing team is struggling. I was more of a generalist; I did work in financial services, high-tech and other industries. Like everyone else who started in consulting, I thought I’d do it for three years, but I was drawn to it, and 18-19 years later I’m still doing it.”

As health care became a more interesting and exciting topic in the U.S. and globally, Stone said she began applying to the industry what she had learned while working with others. She has a “different mindset” than most others who analyze health care systems.

For nearly four years, Stone has been based out of Oliver Wyman’s Dallas office, where she has been leading the firm’s office of reform and its global Health and Life Sciences practice group. Oliver Wyman’s website states the latter “is focused on developing transformational strategies for healthcare companies in the payer, provider, life sciences, and services and technology spaces.” Thus Stone has come nearly full circle to achieving her aspirations at Holy Cross.

“I really think that I have a fact-based view,” Stone said. “I have touched and felt and seen health care all over the place — at the business level and in the trenches of health care on the ground. I have a unique, holistic view and have distilled the complexity down. I have breadth of perspective, as well as depth.”

According to Oliver Wyman’s website, Stone has accumulated “extensive experience in the healthcare industry, including devising growth strategies, improving the cost and quality of healthcare services, establishing innovative partnerships across players in the healthcare sector, developing ACOs [accountable care organizations] and other value-based solutions, and redesigning organizations to support their strategic transformations.”

For instance, Stone was involved in evaluating the U.S. Centers for Medicare and Medicaid Services’ regulations for ACO programs, according to an Oliver Wyman synopsis of her experience. In April 2015, Oliver Wyman published research findings indicating that ACOs serve between 15 and 17 percent of the United States. Its press release states that “almost 70 percent of the U.S. population now lives in localities served by accountable care organizations, and 44 percent live in areas served by two or more.”

The CMS Office of Legislation has defined an ACO as, “an organization of healthcare providers that agrees to be accountable for the quality, cost and overall care of Medicare beneficiaries who are enrolled in the traditional fee-for-service program who are assigned to it.” Stone said AARP has grown into the biggest program out there for Medicare. A number of years ago Oliver Wyman helped it get the best programs.

“[We] bring innovative and thoughtful leaders to improve quality. We’re convening them regularly to accelerate the rate of change,” she said. “This is a big mission of ours. The problems in health care are so intertwined. There are so many stakeholders it’s overwhelming.”

Stone said she needs help scaling up HIC’s work. The U.S. is not the only country confronting complex health issues.

“I have done work globally,” Stone said. “I had a team on the policy side in London looking at best practices in the [National Health Service], and I’ve done work in Asia. The problems, including chronic disease and aging populations, are very global.”

Stone said she would like Chautauquans to leave her talk feeling more informed about the health care debate, and more inspired about all the opportunities they have to influence the U.S. health care system.

“I feel that seldom do we regulate into transformational change,” she said. “We all have roles; we can influence the system if we understand what’s happened. This avalanche will start after smart, informed consumers start becoming more aware of what is happening and what they can do themselves, and vote with their feet.”

And why exactly is she so keen on transforming the U.S. health care system?

“My big passion for this is that it’s the biggest thing that bankrupts people,” Stone said. “It will prevent the economic growth and innovation we need.”