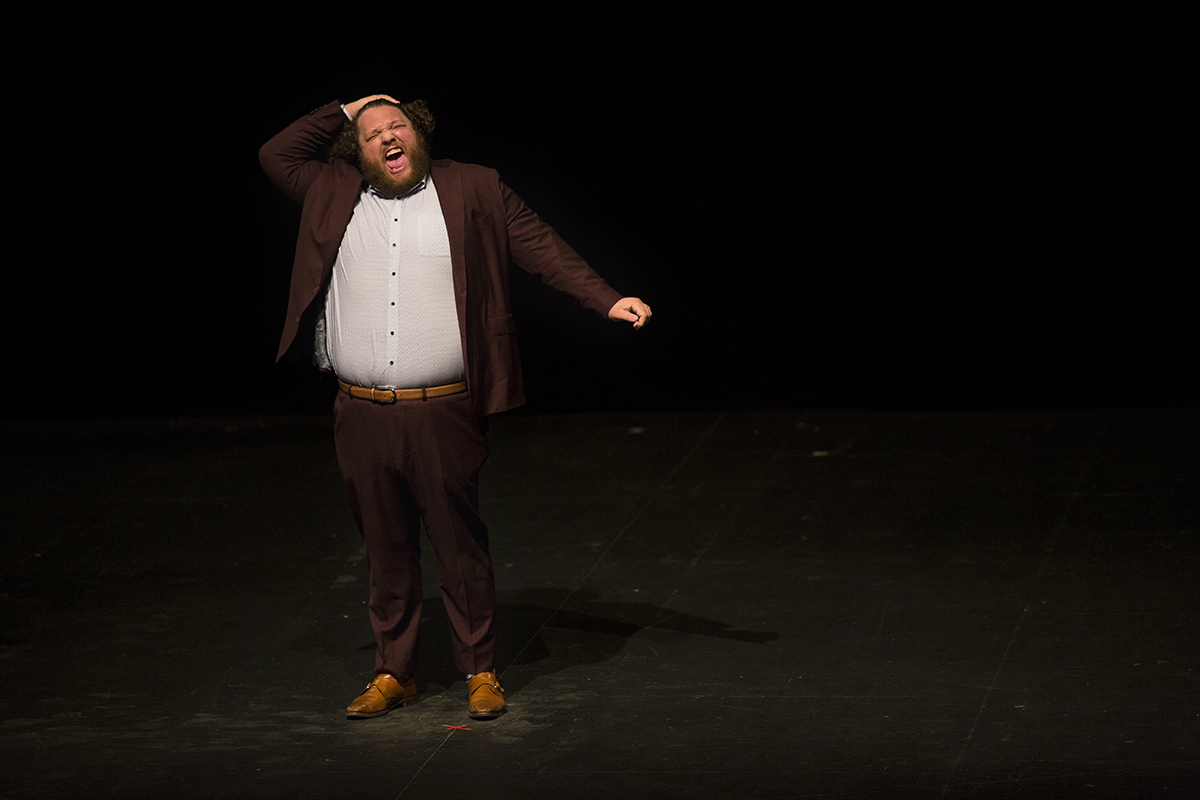 Last season, Osgood and a group of Young Artists used Old First Night Run as the setting for one of their Opera Invasions performances. They would run for a time during the race, and then stop. At each stop, they performed an aria for anyone within earshot, runners and spectators alike.

Not far north of Miller Bell Tower during the final stretch, something happened to show Osgood that the direction he was leading Chautauqua Opera, and the new ways he was bringing opera to the community, were having the exact impact he’d hoped. A man walked along the edge of the path near where Osgood and the Young Artists were preparing to sing. With him, holding his hand, was his young daughter. Osgood guesses she was maybe 5 years old.

“The man turns to his daughter and tells her ‘There they are,’ ” Osgood said. “ ‘There’s who? Who are those people, daddy?’ ”

The little girl didn’t understand who these crazy people were, running around, joking, laughing, having a ball of a time, and stopping to sing to anyone who would listen.

“ ‘Well,’ ” Osgood recalled the man saying, leaning down next to the little girl, “ ‘those are opera singers.’ ”

Osgood paused to let that line hang in the air for a second before jolting forward in his office chair, his excitement propelling him.

“That is golden,” he said. “That is perfect. That is what opera is. And that is the goal. To show people not only the work that goes into opera, but the fun, the joy, and the passion that each of us have for it.”

To Osgood, no part of Chautauqua Opera better personifies this passion than the Young Artist Program, now in its 49th year. This year’s crop of eight apprentice and 16 studio artists form what, for many, is the backbone of Chautauqua Opera. And it is these young singers who afford Osgood the chance to showcase opera in new and innovative ways.

Last Monday, Chautauqua Opera introduced this summer’s 24 Young Artists by way of a Sing-In held in Norton Hall. Each singer performed an aria for the audience, showcasing the ability that earned them an invite to this summer’s program. Osgood was as excited as anyone to hear each performance.

“I hear the representation of the unique ‘want to’ within each Young Artist,” he said. “I get to hear again that thing that got them here.”

A career in opera is hard, staggeringly so. Osgood said the demands — physical, mental, emotional, financial — cause lots of people to give up.

“Nobody in their right mind would pursue a career in opera unless they absolutely had to with a burning passion at their core,” he said.

Twenty-four Young Artists stood on stage Monday night and showed that burning passion that is, for Osgood, so essential.

“I was fortunate enough that I was introduced to music pretty early,” said soprano Alaysha Fox, who presented “Il est doux, il est bon” from Hérodiade at the Sing-In. “I feel like now it’s so important to take what I was given and give it back to a new generation.”

“A huge part of that is being able to bring our art to new audiences in new, interesting, exciting ways that challenge us to grow and get better,” he said.

Last year, Osgood introduced the Opera Invasions and Composer-in-Residence programs with the express intent of personalizing opera. He wanted to remove the stigma of, in his words, “pointed helmets and spears,” and reveal opera as the young, energetic, exciting artform he knows it to be.

Opera Invasions occur at random and unique spots around the grounds throughout the summer, giving people who may not buy a ticket to a performance in Norton Hall or the Amphitheater a chance to see an operatic performance.

The Composer-in-Residence becomes a face for Chautauqua Opera within the community, personalizing the relationship between audience and composer. This year’s Composer-in-Residence, Gity Razaz, has composed three original operas that will see their world premieres during the season.

“The idea of new music, especially opera music, can be scary, but people aren’t inherently scary,” Osgood said. “The Composer-in-Residence gives people a chance to meet the composer and build a relationship with her, to invest in her. When you invest in people, the appreciation of their work will grow.”

In addition to the Opera Invasions and Composer-in-Residence programs continuing this year, Chautauqua Opera is introducing new programming that will pull the curtain back even further on the operatic form, inviting audiences into the process. Among this programming is the introduction of open rehearsals for the production of Hydrogen Jukebox. Once a week leading up to the opening of the show in Week Five, Chautauquans will be able to attend rehearsals to watch the Young Artists and the rest of Chautauqua Opera work in preparation for opening night. The first rehearsal is 2:30 p.m. Monday in Fletcher Music Hall.

Additionally, July 11 brings the premiere of the Family-Friendly Opera Revue. This show is an interactive event in the spirit of a “choose your own fate” tale. Audience members will be able to determine the course of the action on stage by choosing from one of three possible narrative paths at various points during the show. This direct audience involvement and cross-generational appeal are the cornerstones of Osgood’s approach to contemporary opera direction.

“The level of excitement about exploring what opera can do in this generation is like a tsunami,” Osgood said.

From Young Artists to Composer-in-Residence, from Opera Invasions to open rehearsals and open-mics to recitals, that wave of excitement is poised to crash onto the 2017 season.

Part of that crashing wave: Old First Night Run. As the artists navigate the race, stopping every so often to launch into song, there will be many more chances for many more Chautauquans to learn who these running, singing, joyous artists are.