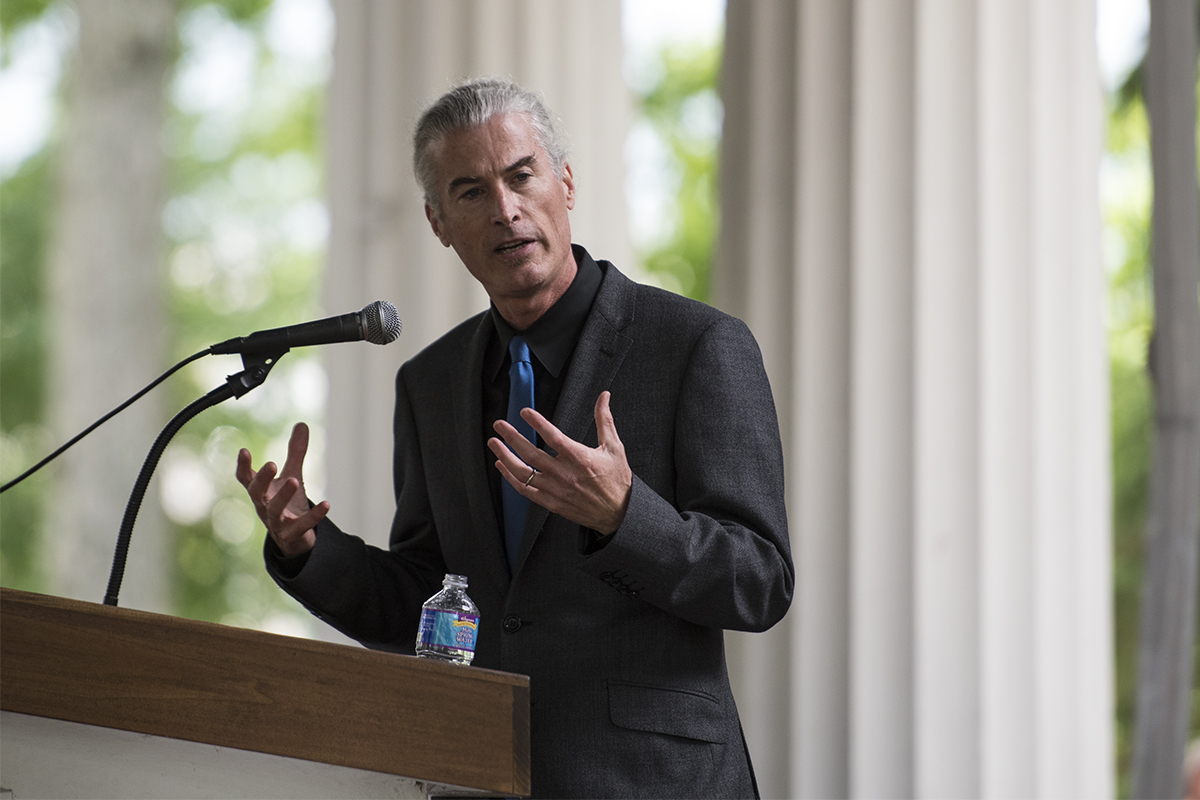 Dr. Kelly Bulkeley speaks at the Hall of Philosophy on Monday, Jun. 26. Dr. Bulkeley is a psychologist of religion specializing in dream research, and led the lecture "Big Dreams: The Science of Dreaming and the Origins of Religion." OLIVIA SUN/STAFF PHOTOGRAPHER

Being a dreamer has always been dangerous.

Religion and dream research psychologist Kelly Bulkeley said so in Monday’s Interfaith Lecture Series in the Hall of Philosophy, in his address “Big Dreams: The Science of Dreaming and the Origins of Religion.” Bulkeley’s lecture was the first exploring Week One’s interfaith theme “Inventing God? A Brief History of Religions.”

Bulkeley began his lecture by asking audience members to recall a dream, specifically the most vivid dream they’ve ever experienced. Once they conjured up a dream, participants were to title their dream as if it were an artistic work. He finally encouraged audience members to recount their piece to others. In this “oniric ritual” of shared experiences, he said, dreamers could acknowledge other dreamers.

“We are all dreamers, and in our dreams we catch glimpses of our common humanity and our countless potential for collective growth,” said Bulkeley, founder and director of the Sleep and Dream Database.

That potential isn’t exclusive to the number of dreams an individual experiences, though. For Bulkeley, it’s quality over quantity, even in the extreme case of a middle-aged man who came to him in a dream-sharing class, confessing he could only remember one dream from his entire life. Bulkeley said the reflection that stems from those experiences is the most important part. Often, he is able to link solitary dreams to spiritual.

“Dreaming is imaginative play in sleep,” he said. “Think of all of the different animals you see playing. Play is an evolutionary feature of the lifespan for many creatures, particularly in the early phases of their development.”

Bulkeley believes “those same evolutionary dynamics in play are also active in our sleep, giving rise to dreams.” Rapid eye movement, or REM sleep, is an indicator of constant brain activity, human minds “not just shutting off like a light switch and turning back on when we wake up in the morning,” he said. His research thus far has led him to present four theories suggesting historically, dreams have always acted outside of the eight-hour shuteye window.

In a network of caves in southern Europe, the writing’s on the wall. Late Paleolithic people created an expanse of designs on the caves’ interiors, depicting the animate and inanimate simultaneously, leading Bulkeley to coin his first theory, “symbolic play.” He said these paintings indicate a desire for innovation, serving as some of the “oldest dream journals in history.” The artistic works tended to stimulate deeper, more overtly religious slumber.

“I think we should appreciate the ingenuity of these Paleolithic people who endured the simplest of materials to create the powerful tool for intensified dreaming,” Bulkeley said.

Within the same general timeframe, Australian Aboriginals were experimenting with their own mythic beliefs, their theory of “the dreamtime” spreading to surrounding island communities. To them, Bulkeley said, dreaming acted as a “soul release” while an individual nodded off.

“The myth tells of a realm outside our ordinary time and space, yet penetrating every aspect of daily life,” he said. “The ancestors brought this realm into life by means of their generative dreaming and singing and striding across the land.”

Bulkeley discussed a group of early immigrants to America who operated in a hunter-gatherer, survival-oriented mode. Their knowledge of some plants, animals and landscapes was said to be the first in human history, and because of their exposure to so many seemingly new species, they were classified as “favored dreamers.” During a transition period from adolescence to adulthood, young people were exposed to “vision quest,” a period of “extreme deprivation” and exposure to the elements, which often led to formation of a new, more adult-like identity.

Finally, he spoke of Asclepius, the Greek healing god known for temple practice of “dream incubation.” This method sought to evoke a particular type of dream, honing in on symptoms of suffering and increases in physical health.

Through all of these methodologies, Bulkeley said, emerged not only individual enrichment, but community enhancement as well.

“I believe the most powerful contribution of dreaming to human religiosity is that it stimulates a playful openness to new life,” he said. “What could you learn about yourself if you were able to track the symbols and motifs of your dreams across the course of your whole life? What kind of dialogue could you generate with your dreaming self?”